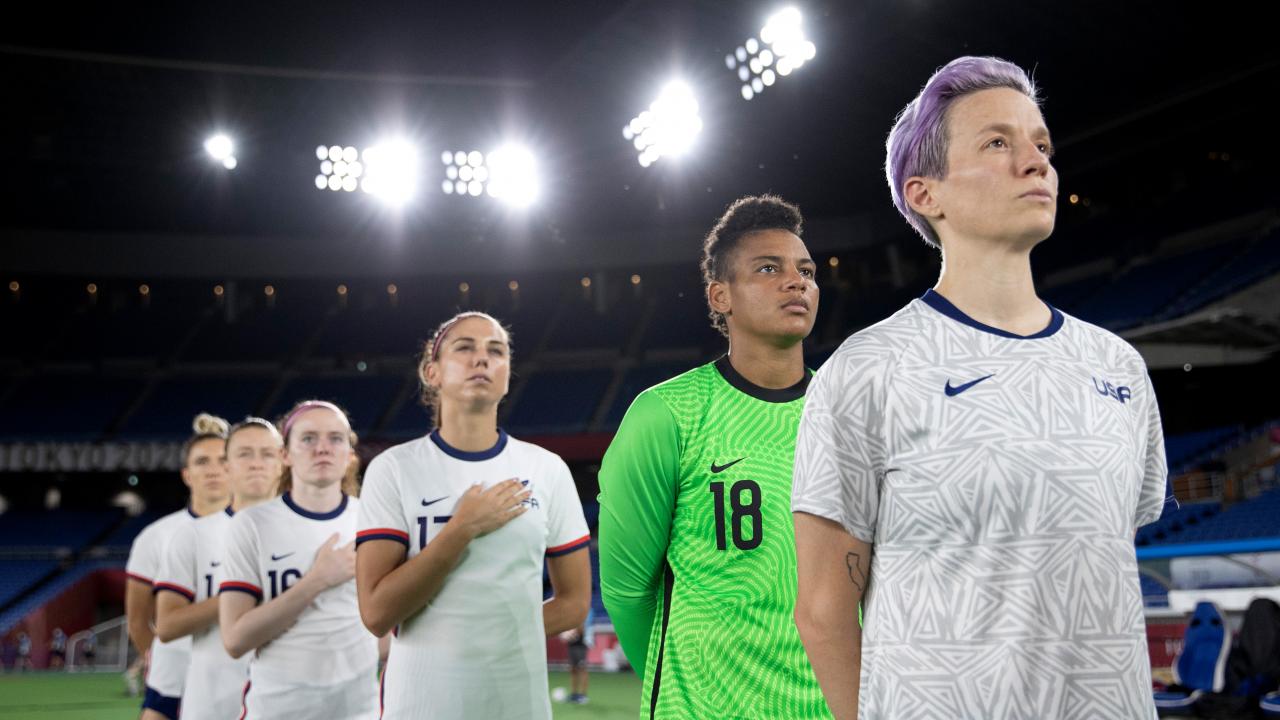 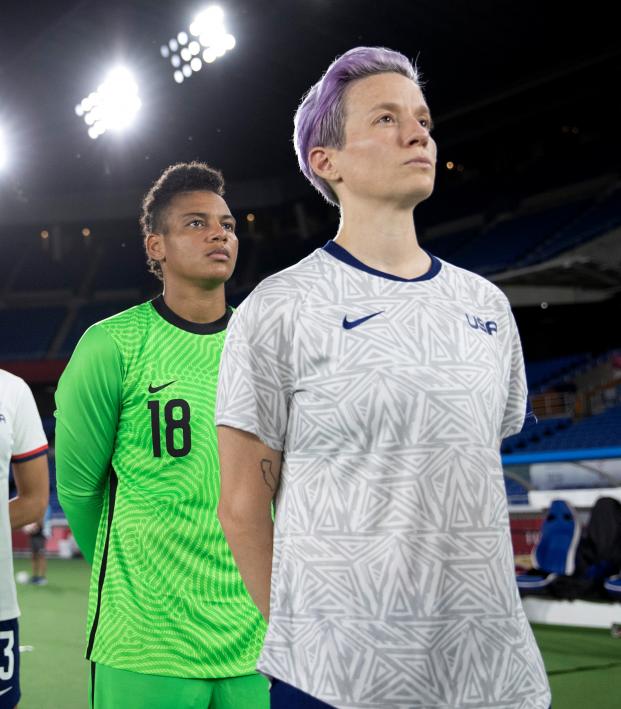 I’m Embarrassed For EA Sports Over Their Attempt At FIFA 22 Women’s Ratings; How Is Rapinoe Still This High?

Another year, another FIFA game where it’s obvious EA Sports paid no attention to women’s soccer. The FIFA 22 women's ratings are somehow even worse than last year, once again proving the WoSo portion of the franchise is merely lip service to try to appease women without actually putting in any effort.

FIFA player ratings are one of the most anticipated parts of a new FIFA game’s release. Fans eagerly await how their favorite players will be rated and then celebrate or denounce said players’ ratings (usually the latter). This year, Lionel Messi took the top spot on the men’s side with a 93 overall rating, one ahead of Robert Lewandowski and two ahead of third-place Cristiano Ronaldo.

The men’s ratings always include folks who are way overrated (Neymar) or criminally underrated (Erling Haaland), but those complaints pale in comparison to how bad the women’s ratings are.

The FIFA 22 women's ratings are bizarrely inaccurate yet again, so much so it’s hard to even pinpoint where to start. We’ll start with the frustrating fact EA Sports chose to announce the ratings by calling the players the “women of Kickoff mode” because FIFA 22 still won’t have any women’s-focused modes — or even club teams for fuck’s sake.

.@samkerr1 and the women of Kickoff mode are forces to be reckoned with Check out all the highest rated female footballers in #FIFA22. #FIFARatings

We’ve already discussed how disappointing it is FIFA 22 still doesn’t include women’s club teams here, so let’s dive into how bad these FIFA 22 women's ratings are.

Once again, chief among the complaints in the ratings is Megan Rapinoe. Last year, Rapinoe was given top billing with a 93 overall rating, one ahead of Sam Kerr and Wendie Renard. Rapinoe played exactly three games in 2020 and didn’t bother playing any club matches, yet she was given the highest rating in the game.

This year, Rapinoe dropped a bit, but she’s still the joint-highest-rated USWNT player, tied at 90 with Tobin Heath and Alex Morgan. I love Rapinoe and everything she stands for off the pitch, but GTFO if you think she’s still a 90-rated player. At 36, she’s hardly played the last two years.

Rapinoe has been pretty good when she has played, but I’d like to see a sample size greater than 20 games before giving someone one of the best ratings in the game. Plus, we don’t even know if she’s retired from the international game, the only mode featuring these women in FIFA 22. Rapinoe even admitted she was overrated last year.

Rapinoe aside, my biggest complaint with the FIFA 22 women's ratings is the lack of a Barcelona and Spain presence. This past season, Barcelona Femení was one of the most dominant teams we have ever witnessed, racking up an unreal 99 out of a possible 102 points in the Primera División with a cartoonish 152 goal difference. The team won the Champions League led by Spanish stars Vicky Losada, Jenni Hermoso, Mapi León, Alexia Putellas, Clàudia Pina and Patricia Guijarro, and yet only one of those players made the top 22 (Hermoso).

Caroline Graham Hansen (90) and Lieke Martens (89) deserve their ratings, but Hermoso, who had 31 goals and 14 assists last year, is severely underrated at 87. Meanwhile, Losada (now at Manchester City), León, Putellas, Pina and Guijarro are nowhere to be scene in the top 22, let alone Asisat Oshoala, perhaps the best African forward in the world right now.

Putellas beat out teammates Hermoso and Martens to be named UEFA Women’s Player of the Year but somehow isn’t one of the best 22 players in the world? Last year’s winner of the award — Pernille Harder — is also conspicuously absent.

It really feels like FIFA just looks at last year’s women’s ratings and makes a few minor tweaks without really paying attention to the game. Take, for instance, Kim Little. The Scottish No. 10 is a great player for Arsenal, but she retired from the international game, making her a bizarre inclusion in a game that only has women’s international soccer.

Then there are players like Lucy Bronze, forever overrated because she’s England’s best player, and a handful of veteran German and French players who seem to get the benefit of the doubt to remain highly rated despite slight declines in their careers. (Call it the Rapinoe effect.)

Christine Sinclair, who is the all-time leading goal scorer in international soccer history — sorry CR7 fans — is a legend of the game. But at 38, is she really an 89 still? She wasn’t even her country’s primary penalty taker at the Olympics, but she’s the only Canadian in the Top 22 despite the Canucks ousting the USWNT on the way to a gold medal.

Speaking of the Olympics, Sweden was dominant at the summer competition before falling to Canada in the final, yet not a single Swede made the Top 22. EA Sports couldn’t even bother watching the second-biggest competition in the women’s game, apparently.

There’s also a dearth of goalkeepers on this list. While keepers are prominent in the men’s Top 22 (six, or more than a quarter), not a single goalie made the FIFA 22 women's ratings Top 22. Where’s the love for Christiane Endler, Hedvig Lindahl, Sarah Bouhaddi, Stephanie Labbé or even Alyssa Naeher? Oh, right, EA Sports would’ve had to paid attention to something more than goals and assists to notice them.

Defenders in general are underrated, Bronze aside. Renard, Becky Sauerbrunn and Amel Majri are the only full-time defenders on the list, and even Majri is a bit of a stretch as a winger who has adopted a left-back role. León or Spain captain Irene Paredes from Barcelona and Magdalena Eriksson, who captained Chelsea to an FA WSL title, are noticeably missing and could probably replace a few of the Americans or Germans. Hell, put Crystal Dunn as a defender, one of the best players in the world whose rating is always lower than it should be because she plays two different positions for club and country.

Overall, it’s a grossly Anglo/Euro-centric list. If you don’t speak English or come from Europe, you don’t have a chance to rank highly in FIFA’s eyes. Sorry to anyone in South America, Asia or Africa, but apparently EA Sports doesn’t realize you exist.

I get that rating players is hard; I’d struggle to come up with a list everyone could agree upon. The frustrating thing is the apparent lack of effort from EA Sports. Given the amount of time and money the developer puts into creating a soundtrack every year, you’d think they could put some energy into making sure the women’s ratings aren’t garbage every year.