ESPN Doing A ManningCast For Golf — Now Do Soccer You Cowards 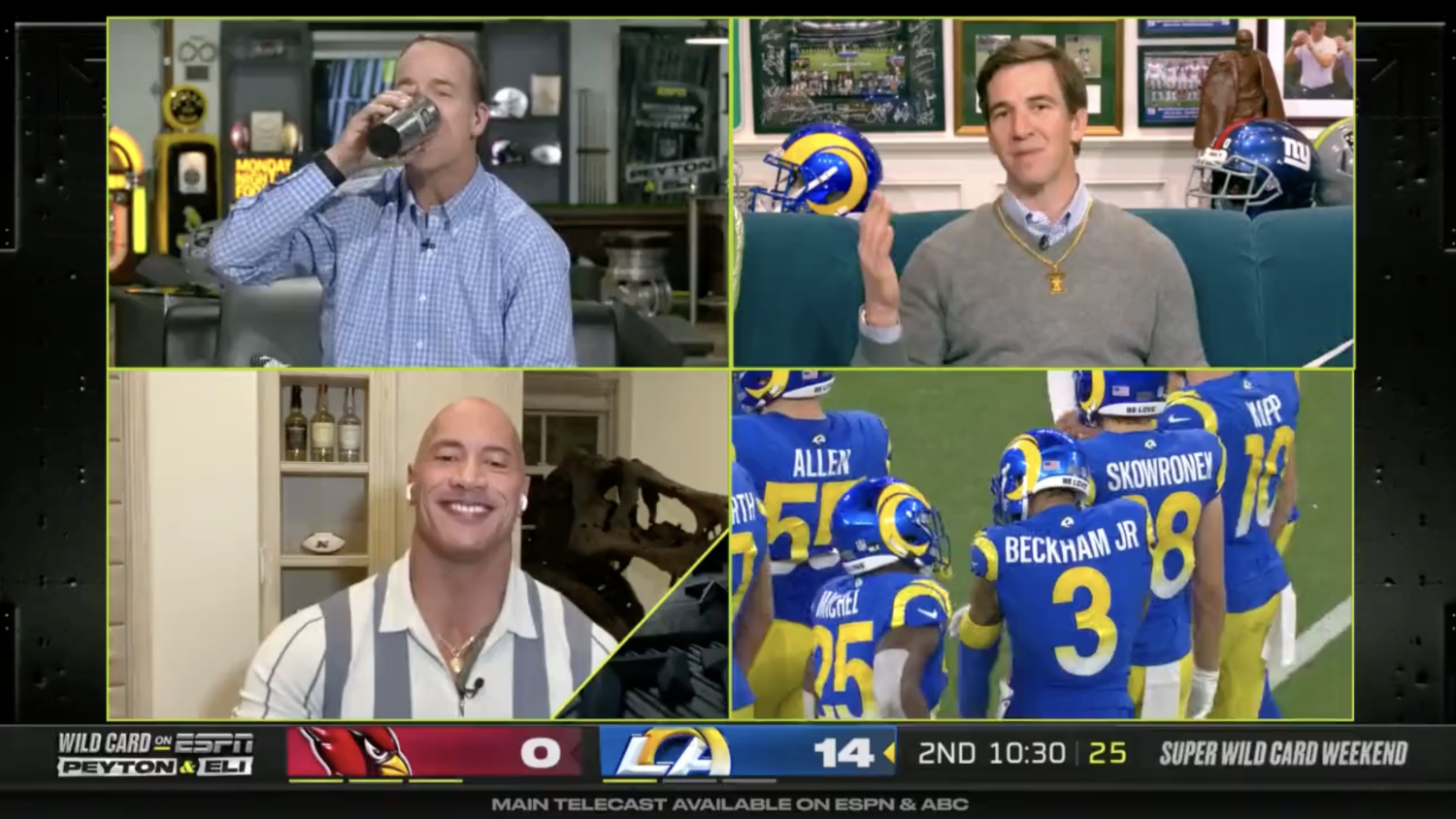 After the success of the ManningCast for the NFL, ESPN is bringing the idea to golf. Let’s hope soccer is next.
@espn | Twitter

For those who follow American handegg, Peyton and Eli Manning’s “ManningCast” of Monday Night Football was a huge hit last year, offering fans a different way to watch the NFL. ESPN simultaneously broadcast a traditional broadcast with announcers talking about the game, but for those tired of the usual commentating tropes or less invested in the action, the ManningCast on ESPN2 provided an excellent alternative focused more on entertainment than pure football.

This week, the ManningCast is heading to golf for the PGA Championship. Now if we could just get that idea transferred to soccer, with or without the Manning brothers.

Tee it up: The “ManningCast” so popular on “Monday Night Football” is coming to major championship golf. ESPN is collaborating with Peyton Manning's Omaha Productions for the alternate telecast during the PGA Championship.

As one of four majors, the PGA Championship is kind of a big deal. ESPN is going all-out for its coverage, including multiple options for viewing. One of those options will be a ManningCast-style show, produced by Peyton Manning’s production company Omaha Productions, which earlier this year signed a deal with ESPN to create content for football (pro and college), golf and UFC.

I love this idea.

Anyone who watches sports on TV knows after a while announcers can grow stale and boring. While some play-by-play announcers enhance the viewing experience and a few analysts know how to explain the game to viewers, more often than not the broadcasters always say the same things and rarely provide interesting insight.

The result is fans grow bored of the show before either changing the channel or focusing on their phone.

A ManningCast is the perfect solution, as casual fans are often more likely to engage with the non-traditional coverage. It’s the same reason millions of people watch Twitch streamers play video games.

Now we just need a U.S. broadcaster to bring the idea to soccer.

Why We Need A Soccer ManningCast

Admittedly, there are times when watching the beautiful game you want to hear the announcers. Some of the most memorable moments in the sport have included brilliant broadcasting calls, such as “Oh can you believe this? Go go USA!” or “corner taken quickly.”

But too often you don’t care much for the announcers, or you’re not invested enough in the match to care what they have to say. In these cases, watching a broadcast with non-traditional commentary is the best way to keep viewers engaged.

This isn’t necessarily a new idea. During big soccer matches, it doesn’t take much searching to find a simulcast in which YouTubers stream themselves watching a game, though unable to show the match in progress due to broadcast rights issues. CBS has even done this with the Champions League.

I want it on TV, with the game being shown with it. A full ManningCast for soccer.

One way to do this is to actually have the Manning brothers on a soccer broadcast. Sure, they’d have no idea what they’re talking about, but it would be a great way for sports fans who don’t follow soccer to learn the beautiful game.

Another option would be to have former soccer players with strong chemistry do their own version of a ManningCast. We’ve seen great camaraderie from analysts on CBS — Clint Dempsey, Oguchi Onyewu, Charlie Davies on the U.S. side, Micah Richards and Jamie Carragher on the Champions League side — so we know they’d be entertaining to listen to during the match.

Other options would be a mix of former players and non-players, such as Abby Wambach and her wife Glennon Doyle, who bless her heart has tried her best to learn soccer. Or bring Megan Rapinoe back and let her hang out with her partner Sue Bird and maybe add in Christine Sinclair, Rapinoe’s former college teammate. Maybe get Steve Nash back involved in soccer broadcasting (actually, please don’t).

Whichever way a broadcaster decides to do it, I think having the broadcasters slightly liquored up, as was the case for the women’s Final Four, is a great idea. 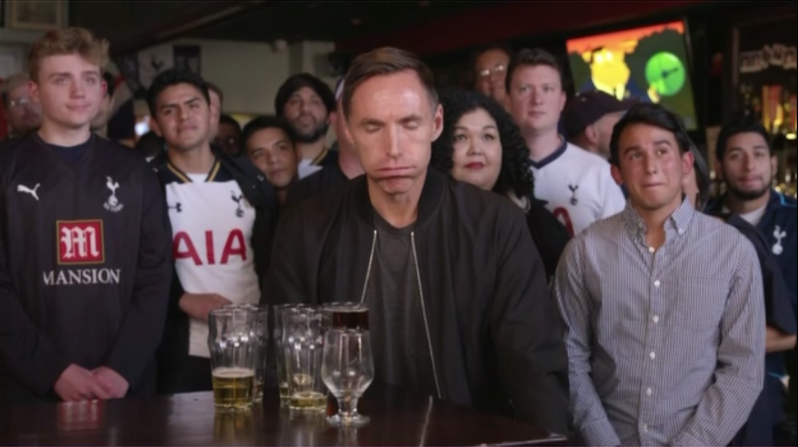 Steve Nash during his soccer broadcasting days, six beers in after his favorite club Tottenham lost 7-2 to Bayern Munich.

When the World Cup rolls around this November (and the Women’s World Cup in 2023), Fox should seriously consider airing a ManningCast-style show. Casuals and non-soccer fans would be far more likely to tune in to entertaining, conversational coverage than the list of drab announcers they’ll hire to call the games.

As for the PGA Championship this week, I don’t think ESPN is setting up this latest ManningCast to succeed. For starters, they’re using Joe Buck — who ESPN pilfered from Fox for a reported $75 million — to lead the coverage, which doesn’t really fit everything we already discussed. While the guests will be interesting and varied — from Charles Barkley to Fred Couples, the Manning brothers to actor Jon Hamm — it remains to be seen if Buck can find the same chemistry with co-host Michael Collins as Peyton and Eli or Bird and Taurasi showed. In fact, the very idea of having a trained broadcaster as host runs counter to the ethos of a ManningCast.

As someone who doesn’t care too much about golf, I’m infinitely more likely to tune into the ManningCast of the PGA Championship than any traditional coverage. I might just turn golf on this weekend to check it out. Probably not, but there’s a chance.

If you’re interested in the ManningCast, it will air for four hours each day during all four rounds — 1-2 p.m. ET on ESPN+ and 2-5 p.m. ET on ESPN2 on Thursday and Friday followed by 9-10 a.m. ET on ESPN and 10 a.m.-1 p.m. ET on Saturday and Sunday. If that schedule isn’t weird enough for you, how about the fact ESPN shares the broadcast rights with CBS, which has the final six hours of coverage on Saturday and Sunday. Imagine watching the first half of a soccer game on ESPN before switching over to FS1 for the second half. Then again, this is golf, which takes all day to finish a round, so maybe they need to switch channels to make sure the viewers are still awake.