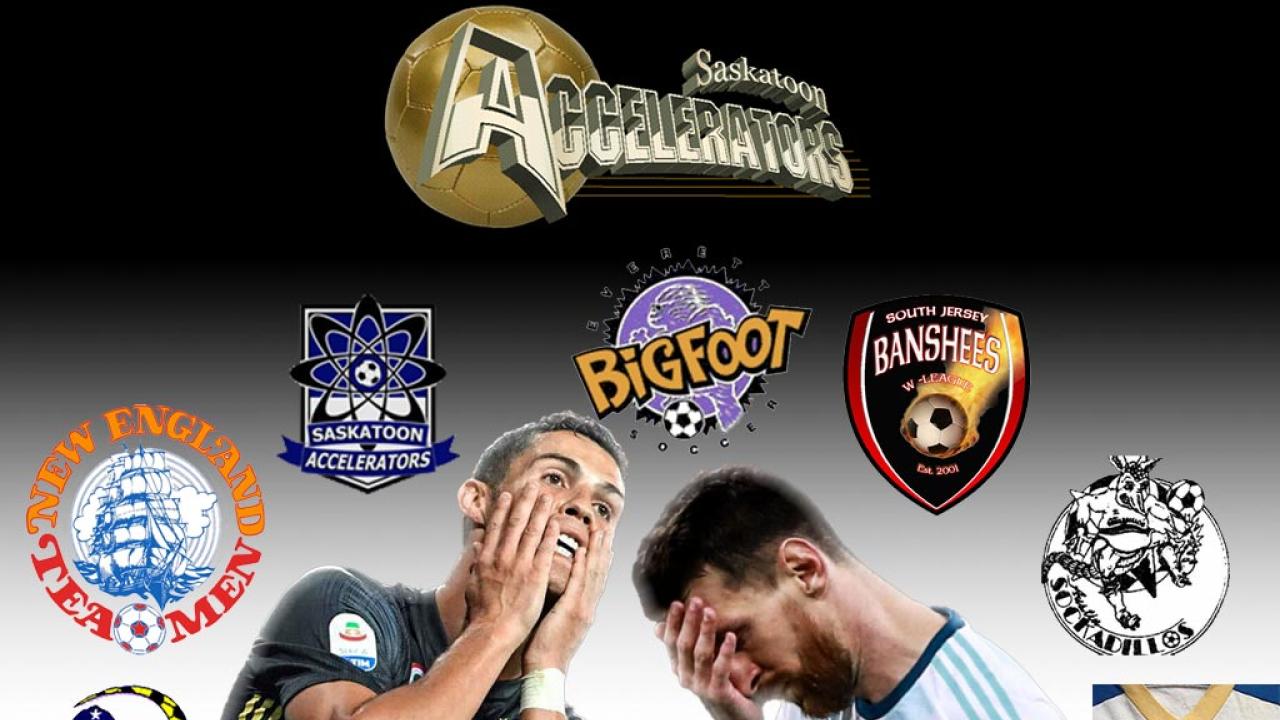 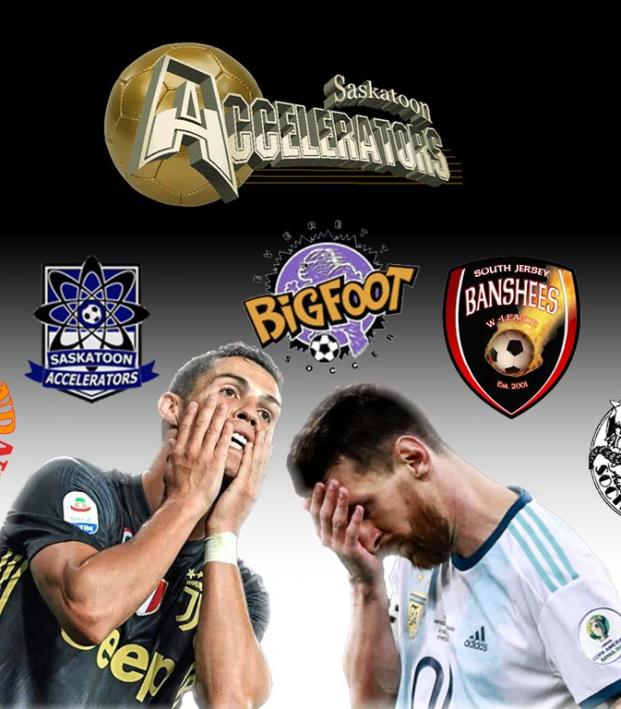 From Banshees To BigFoot: The Best Names Of Defunct American Soccer Teams

What is a Xogg? Alternatively, what is a Zigg? The Xoggz and the Ziggx were the men's and women's semi-pro soccer clubs based out of Columbus, Ohio, in the mid-1990s.

According to fossilized internet forums (because there is no other discussion of the topic), these were made-up names that were going to be assigned meaning through a fan contest. Unfortunately, neither club survived long enough for that to happen.

While these clubs were short lived, their rise and fall illustrates the state of American soccer in the 1990s.

The game was growing, that was undeniable, but the new crop of owners hadn't quite learned from the mistakes of their NASL predecessors a generation before. They experimented with team names, producing some great alliterative monikers like the Albany Alleycats and the Lubbock Lazers. These squads played at the multi-purpose stadiums of local high schools and colleges, and most lasted only a few seasons before going defunct.

But despite the outlandish branding, these fledgling clubs provided the framework for American soccer as we know it today. It's only fair we honor some of the most unique names of the soccer teams that are no longer with us.

New Mexico has a great history of uniquely named soccer clubs, beginning with the New Mexico Chiles in 1990. When the Chiles went under in 1996, they were replaced the following year by the Geckos — who featured one of the best logos in the USL.

After winning the USISL third-division title in their inaugural season, the Geckos moved up to the second-tier A-League, where they struggled both on the pitch and financially. The club moved to Sacramento for the 1999 season, keeping the same name but folding before the new millennium.

Is that gecko wearing a durag? Via Wikimedia Commons 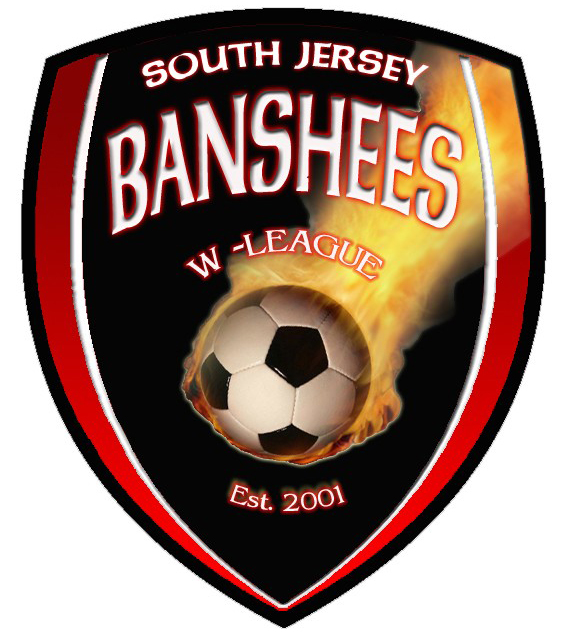 The South Jersey Banshees were the former W-League affiliate of the Ocean City Nor'easters, a current men's club in USL League Two. Among the club's famous alums is none other than USWNT legend Carli Lloyd, a New Jersey native who attended Rutgers University.

But can we take a second to talk about that logo? Someone discovered the fire effect on Photoshop and decided to have a field day. The designer added the flaming soccer ball first and asked what the team name was later. The result looks like the final project from a middle school computer class. The most disappointing part is that there was so much potential here to design a terrifying banshee. Remember, just because you can, doesn't mean that you should.

Tonight, #USWNT legend @CarliLloyd plays her final international game. While our @USLWLeague team, the South Jersey Banshees (2001-06) was only a brief stop on her journey to becoming one of the greatest of all time, we're so proud of that Jersey Girl. #ThankYouCarli pic.twitter.com/3pjCVRiK9G

No, this Allentown-based club is not named after a group of degenerates — rather, it is a shortened version of the Pennsylvania state nickname: The Keystone State.

While the name likely turned a few heads at the time, the Stoners had a significant influence on the game. They had one of (if not the) first jersey sponsors in American sports, as their 1980 jerseys were represented by none other than ALPO dog food.

The team was resurrected in the 2000s and even won another championship but could not remain solvent.

Anyways Purina is in second place in my American Soccer Pet Food Jersey Sponsors Power Rankings™. #1 on the ASPFJSPR is ALPO, of the Pennsylvania Stoners, of course. This was the first-ever jersey sponsorship of an American soccer club, true story: pic.twitter.com/dmjGmw0zjV

Executive 1: "So here's what I was thinking — people love Armadillos, and we have a lot of 'em down here in Texas. ... What if we named the team the Armadillos?"

Executive 2: "I like that, but what if, and hear me out, we made the name soccer-related."

Executive 1: "I love the way you think partner. What did you have in mind?"

Executive 2: "Yup, the Sockadillos. You take soccer, and you take armadillos, and you smash them together to get one Texas-sized name."

Executive 1: "And how do you figure we'll spell that?"

Executive 1: "Jim, you're a genius. Let's get that out as soon as possible."

Groovy as it sounds to me, I suppose Austin Lone Stars isn't a particularly original name for any Texan team. But before that they were known as the Austin Sockadillos. Wow. Can't even understand what league they played in - indoor third division or something - but that's a name. pic.twitter.com/YjsqYjSG75

Now this one was clever. Not only was the name "Tea Men" a local nod to one of the most significant events in American history, but the club was also owned by Lipton Tea Company. American sports need more teams named after historical events and figures. I want the Chicago Capones, the DC Monroe Doctrines, and the Hartford Headless Horsemen.

The Tea Men lasted two years in Boston before moving to — of all places — Jacksonville, keeping the same name and logo, only swapping "New England" for "Jacksonville" on the team crest. Needless to say, the Jacksonville Tea Men did not last long. 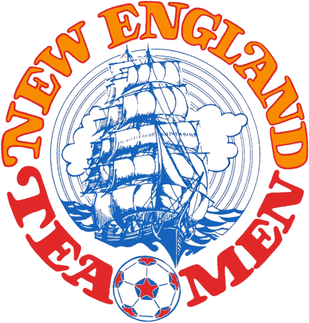 With a name that sounds like it came from a Kenny Rogers tune, the New Orleans Riverboat Gamblers enjoyed one of the longest lifespans of any club on this list. The Riverboat Gamblers survived the turmoil of league rearrangements during the 1990s, playing in four different leagues while also changing stadiums twice. The club was renamed the New Orleans Storm in 1998 but only lasted two seasons with that stale name before folding.

One notable player to suit up for New Orleans was Stern John, a native of Trinidad and Tobago who spent a decade playing in England and made more than 100 appearances for his country.

In continuing with the theme of absurd team names derived from local culture, we have the Seattle BigFoot (don't forget the capitalized "F"). They were one of four professional soccer teams in the Seattle area, including the Seattle Sounders (USL A-League), Seattle SeaDogs (Continental Indoor Soccer League) and FC Seattle Storm (a "super-team" with the best players from Seattle), leading Sounders president Alan Hinton to proclaim: "With all the teams in the area now, Seattle is rapidly becoming the soccer capital of America."

The club began as the Everett BigFoot in 1995, serving as a feeder side for the Sounders. They then merged with fellow USISL club Puget Sound Hammers in 1997 to become the Puget Sound BigFoot. The team then became the Seattle BigFoot for the 1998 season — its final under the BigFoot name. The BigFoot was absorbed by the Sounders, becoming the Sounders Selects and leaving behind any cryptid associations.

Apologies for the low quality, but this is an elite 90s color scheme. Via Wikimedia Commons

On this list we've looked at teams named after cryptids, historical events, unique animals and just about everything in between, but I can't say I expected to find a club named after a particle accelerator. The Saskatoon Accelerators, located in the largest city in the Canadian province of Saskatchewan, was an ode to the burgeoning scientific community at the University of Saskatchewan and their novel synchrotron — a particle accelerator that creates x-rays by circulating high-energy electrons.

The club lasted four seasons in the Canadian Major Indoor Soccer League before folding after the 2010 campaign. The CMISL lasted a further four seasons before going under in 2014.

This was the actual logo of a professional soccer team. Via Wikimedia Commons

A club badge taken straight from the pages of your high school physics textbook. Via Wikimedia Commons

The most heartbreaking thing about this women's soccer club from upstate New York is that it only lasted one season while only leaving behind a single-sentence summary on Wikipedia. There's no sign of a logo (or any photographic evidence of the existence of the club) anywhere, so here is the only visual that came to mind.