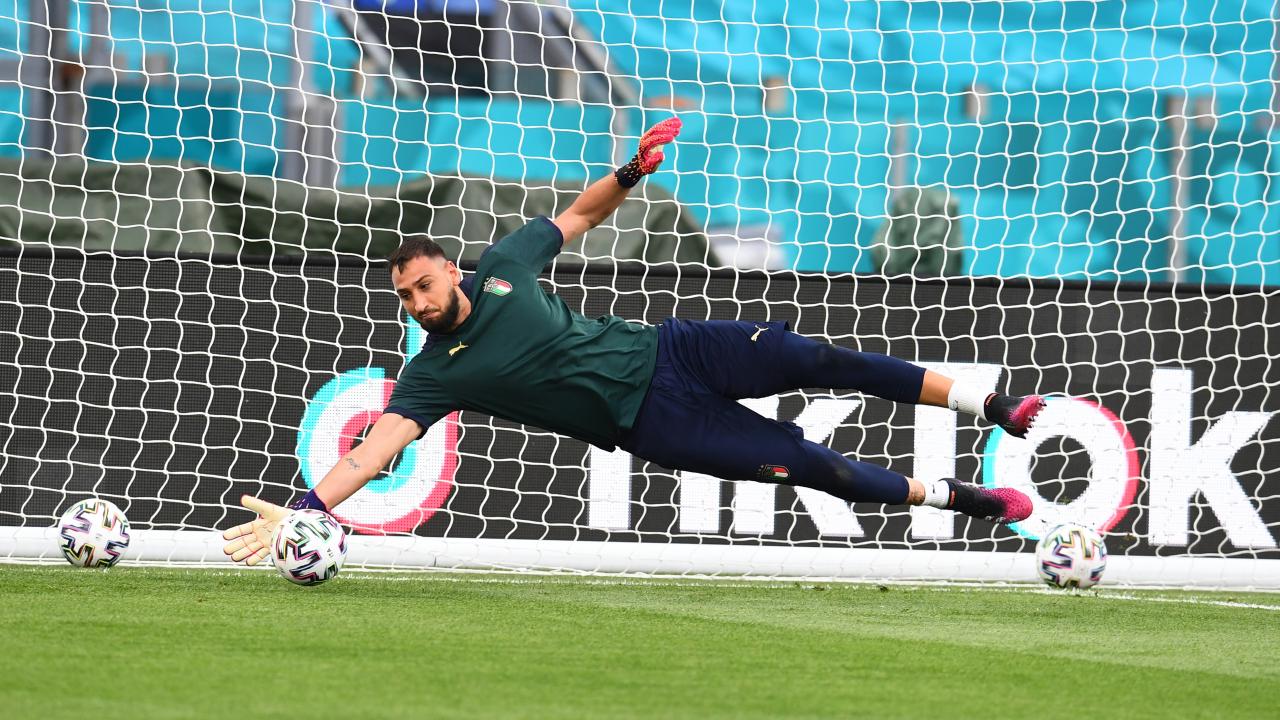 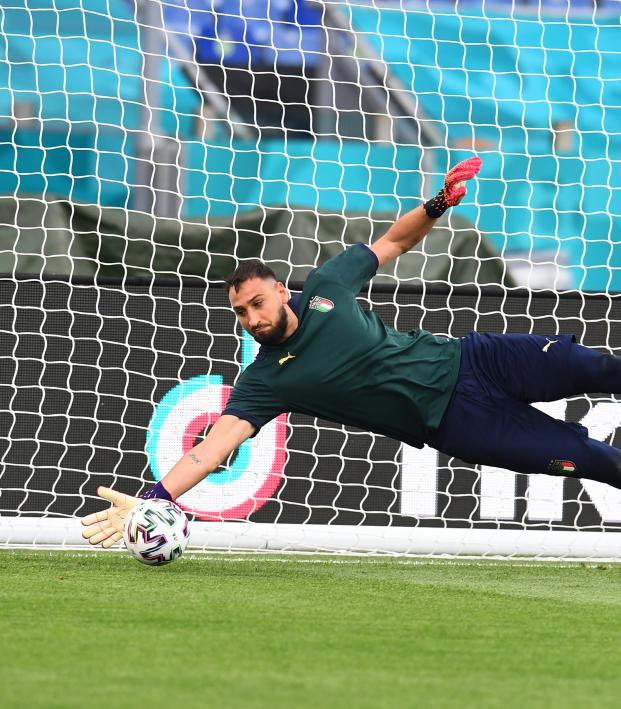 The build-up to every major international tournament is the same: who has the best striker? Or, this is why x midfielder is going to dominate or why this winger is the key to this country getting out of its group.

But no one ever talks about the goalkeepers. In such a short tournament, where three matches decide a team's fate, the importance of the goalkeeper becomes magnified.

So let's give the goalkeepers the spotlight for a little bit, because often they're the ones that end up deciding the tournament.

Yes sir, he can boogie; boogie his way to last place on our goalkeeper rankings (I really apologize to Scotland fans). It had to be somebody, and unfortunately the worst starting goalkeeper at Euro 2020 is David Marshall. Despite making the penalty save that sent Scotland to the Euros for the first time since 1996, Marshall was benched multiple times at Derby in the EFL Championship and endured a poor season overall. He's first in Scottish hearts, but, unfortunately, last in the rankings.

Another Euro starter that toils in the second tier, Dimitrievski actually enjoyed a pretty good season at Segunda División side Rayo Vallecano. He only allowed 27 goals in 28 matches en route to a respectable sixth-place finish two seasons after the club was relegated from LaLiga. Dimitrievski was also in goal for North Macedonia's famous victories over Georgia and Germany this past year.

It's still unclear whether Hennessey or Leicester's Danny Ward will start for Wales this summer, as both have appeared in goal for Rob Page's side in recent matches, but one thing is clear: neither player has made a Premier League appearance this season. The 34-year-old Hennessey will likely get the nod, but he hasn't started more than half of Palace's league matches in a season since 17-18. His EPL status does give him the edge over David Marshall though.

If you want to support a country with a lot of mediocre, inexperienced goalkeepers, then Austria is the way to go. Schlager has just six caps to his name and played four Champions League qualifiers for LASK a few years ago, but that's about it.

It's really anybody's guess who will be starting in goal for Ukraine this summer, as all three of these goalkeepers have started multiple international fixtures during the last year. Pyatov is the veteran and the familiar face among the bunch, having toiled for both Shakhtar and Ukraine for what seems like an eternity now. But Pyatov lost his starting position at the club level this season to 19-year-old Trubin, who made his international debut back in March. Then there is Bushchan, who started two of the teams three recent World Cup Qualifying fixtures.

All three are solid with out being spectacular.

Before we advance any further let's get this out of the way: Rui Patrício is not a good goalkeeper anymore. He was at one point, but in recent years, Patrício has been buoyed by his reputation and some exceptional Portuguese defenses. He is not good with his feet, he is even worse at coming off his line, and his 3.4 more goals allowed than expected were third-worst among eligible EPL keepers. Portugal has Anthony Lopes, one of the best goalkeepers in France, yet they still insist on starting Patrício, which is just baffling to me.

Imagine making your national team debut and then waiting 12 years before playing for your country again. Well, Russian goalkeeper Anton Shunin did just that. After his debut under Guus Hiddink in 2007, Shunin waited behind Igor Akinfeev for more than a decade, finally making his second national team appearance in 2019. A life-long Dynamo Moscow player, 34-year-old Shunin has just one defeat in his 10 Russia appearances. Patience pays off.

Very much a keeper on the upswing, Çakır helped Trabzonspor allow the second-fewest goals in the Turkish Süper Lig en route to a fourth-place finish. Although he has just eight appearances on the international circuit, Çakır is a more than capable shot-stopper with above-average athleticism that will likely be on the radar of a few European clubs.

The fact that a player of Olsen's caliber is ranked 16th is more of a result of the quality of the players around him rather than any of his own shortcomings. Although he was Pickford's backup at Everton this season, Olsen is a solid keeper with Champions League experience for three different clubs, plus a European Championship and a World Cup under his belt.

Maybe I'm still infatuated with his penalty-stopping showcase at the 2014 World Cup, but many teams in this tournament would be lucky to have Tim Krul between the sticks. He has great leadership skills, is great with his feet and is pretty decent with his hands as well. Despite Valencia keeper Jasper Cillessen missing out on a Euro place after a COVID-19 diagnosis, the Netherlands will be just fine with Krul in goal.

Vaclík was a regular for Sevilla for two seasons before losing his starting position at the start of this year and missing a good chunk of the season through injury. Think of him as a decent LaLiga starter and expect him to go out on loan next year, which means he will have something to prove this summer.

You can't be expected to know the name of every keeper at the Euros, but Dominik Livaković is definitely a player to keep track of. He has been phenomenal for Dinamo Zagreb, earning clean sheets in more than half of his league appearances over the past year. Now at his first international tournament, Livaković is another keeper that has a chance to prove himself on Europe's biggest stage and possibly earn a move to a major league.

When the Euros were scheduled to take place last summer, Jordan Pickford was in the worst form of his life. Dean Henderson and Nick Pope were strong contenders to usurp the Everton keeper. This poor run continued into the 20-21 campaign, and then something clicked. For the past couple of months, Pickford has played like the keeper the media has been hyping him up to be for years now. The question is, which Jordan Pickford will show up this summer? 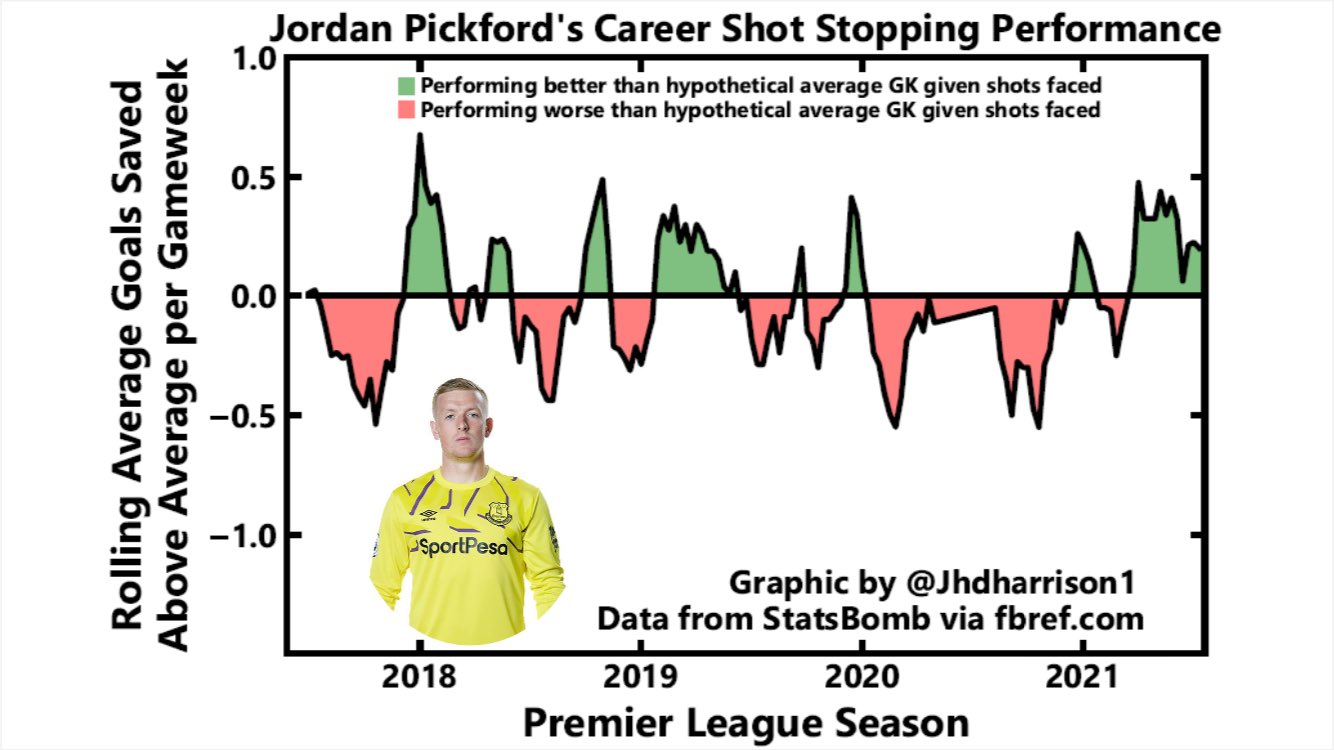 Hrádecký is beloved by FIFA (he's an 83 overall in FIFA 21), but his performances on the pitch have not quite backed up his rating. The Finnish keeper was very good in 19-20, mediocre in 17-18 and 18-19, and average this season. Hrádecký did notch eight shutouts in 18 matches back in qualifying, a sign that he is well-suited for the international stage.

The question everyone is asking about Spain is: who will start in goal? After locking down the starting position for years, David de Gea has struggled recently — causing him to be dropped both by club and country this year. One paper, Simón is probably a slight upgrade at the moment, although the Bilbao man has not been able to maintain his great form after a spectacular 19-20 campaign.

If I had one pick for most underrated goalkeeper in Europe, it may very well go to Newcastle's Martin Dúbravka. The Slovakian keeper prevented 10 more goals than expected in the Premier League last season — which is impressive enough, but he also allowed fewer goals than expected in his other three EPL seasons too, including after returning from injury this year. If he can improve the other facets of his game, Dúbravka has a chance to be a world-class keeper.

Like many Leipzig players, Gulácsi played with Austrian feeder club Red Bull Salzburg before moving to Germany. But unlike many of his Leipzig teammates, Gulácsi never showed immense promise in his younger days. At age 25, he was third-choice behind 39-year-old sweatpant-toting keeper Gábor Király (who was playing in the Hungarian league) at Euro 2016. But as Leipzig improved, so did their Hungarian keeper. After two elite seasons in 18-19 and 19-20, Gulácsi has taken a step back this year, but he is a big reason behind Hungary's qualification.

Similar to Gulácsi, Swiss shot-stopper Yann Sommer is experiencing a run of poor form after two very good seasons. Sommer's peak was slightly better than Gulácsi's, but his struggles this year have also been slightly worse than his Bundesliga counterpart, making the duo very difficult to separate.

In case you forgot just how good of a keeper Schmeichel really is, refer to his FA Cup final highlight reel below. While the players around him have changed, Schmeichel has been one of the constants for Leicester City since its title-winning season and is one of the keys between the Foxes' sustained success.

After some struggles during his initial season in Spain, Courtois has adjusted nicely to life in Madrid. The Belgian is a very good shot-stopper, but he is also elite in the air, ranking in the 94th percentile among European keepers in percentage of crosses stopped.

Is there any elite goalkeeper that is talked about less than Wojciech Szczęsny? After toiling at Arsenal for a while — and doing well despite the criticism — the Polish keeper moved to Roma, where he shined again, before finally joining Italian giants Juventus. He casually led Juve to three Scudettos in a row while ceding some time to Gigi Buffon — earning shutouts at a rate of nearly 50 percent. In 18-19, he prevented five more goals than expected while making 59 saves — meaning each save was worth nearly one tenth of a goal to his club.

What else does this guy have to do to earn some recognition?

The most coveted free agent on the market, and for good reason, Donnarumma is apparently close to signing with PSG. The Italian keeper has allowed 12.2 fewer goals than expected over the past three seasons, placely him firmly among the European elites.

Ever since his injury in 2017, Manuel Neuer has not quite been able to recapture the form that made him the best keeper in the world. Still, the fact that he is still in contention to be the best keeper in Europe is a testament to just how good the German was in the 2010s. The Bayern shot-stopper has allowed 0.21 fewer goals than expected per shot over the past year, while also ranking in the 95th percentile in number of defensive actions outside the penalty area. Yup, Neuer is still elite.

In terms of pure shot-stopping, Lloris has to be in the conversation for best keeper in the world. Over the past two seasons, the Frenchman has prevented 0.21 more goals than expected per match for Spurs in the Premier League — about eight goals per season. While some goalkeepers like Manuel Neuer and David de Gea have declined after turning 30, Lloris has saved his best seasons for the latter part of his career.