Christian Pulisic Is Too Nice For No-Rules FIFA

How can the U.S. ever expect to win a World Cup when its star player can’t even grasp Concacaf-rules football?

Christian Pulisic, the 20-year-old Borussia Dortmund who is already perhaps the USMNT’s best player, was a part of the FIFA 19 World Tour with a new video that dropped this week. Pulisic faced off against BVB teammate and FIFA 17 cover boy Marco Reus in a no-rules match of FIFA 19.

No rules means just what you’d think: no offside, no fouls, no bookings.

Pulisic teamed up with English pop singer Liam Payne (they couldn't get an American?) while Reus was paired up with MoTrip, a German rapper.

Just as would probably happen in real life, the Germans dominated.

Both pairs played as Dortmund for the match, but Reus-MoTrip ran away with it 3-1, taking full advantage of the no-rules format.

Pulisic and Payne constantly complained about getting fouled by Reus and MoTrip, obviously forgetting there were no rules.

Payne did his best to not drop any F-bombs.

“You guys hate the rules,” Payne said, before adding like a petulant child: “I’m telling EA.” 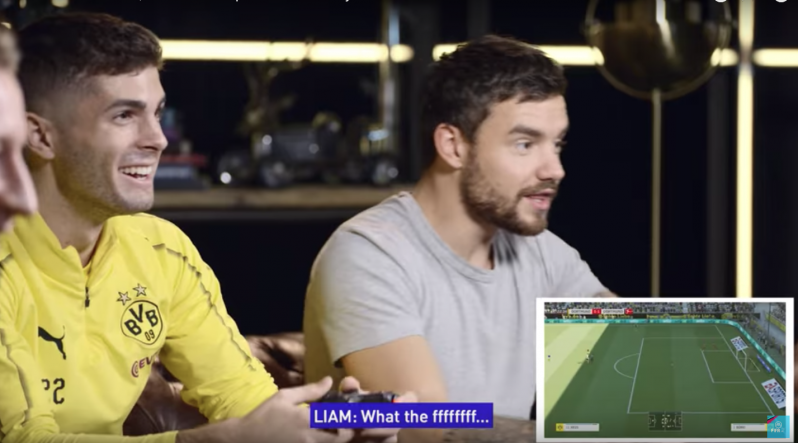 Here's a shortened version of the above video, though we're a bit surprised CP would advertise his comprehensive defeat.

You’d think Pulisic would be used to no-rules football by now, given his (failed) experience trying to get the USMNT qualified for the World Cup out of Concacaf, which often seems to favor similar rules.

Pulisic and Reus were just the latest to feature in the FIFA 19 World Tour, which has included stops in London, New York City, Paris, Rio de Janeiro and now Dortmund. Other notable matchups have included Odell Beckham Jr. against A$AP Rocky and Stormzy and Dapaah against Marcus Rashford and Jesse Lingaard. Lewis Hamilton vs. King Bach will be next up on the tour in Abu Dhabi.