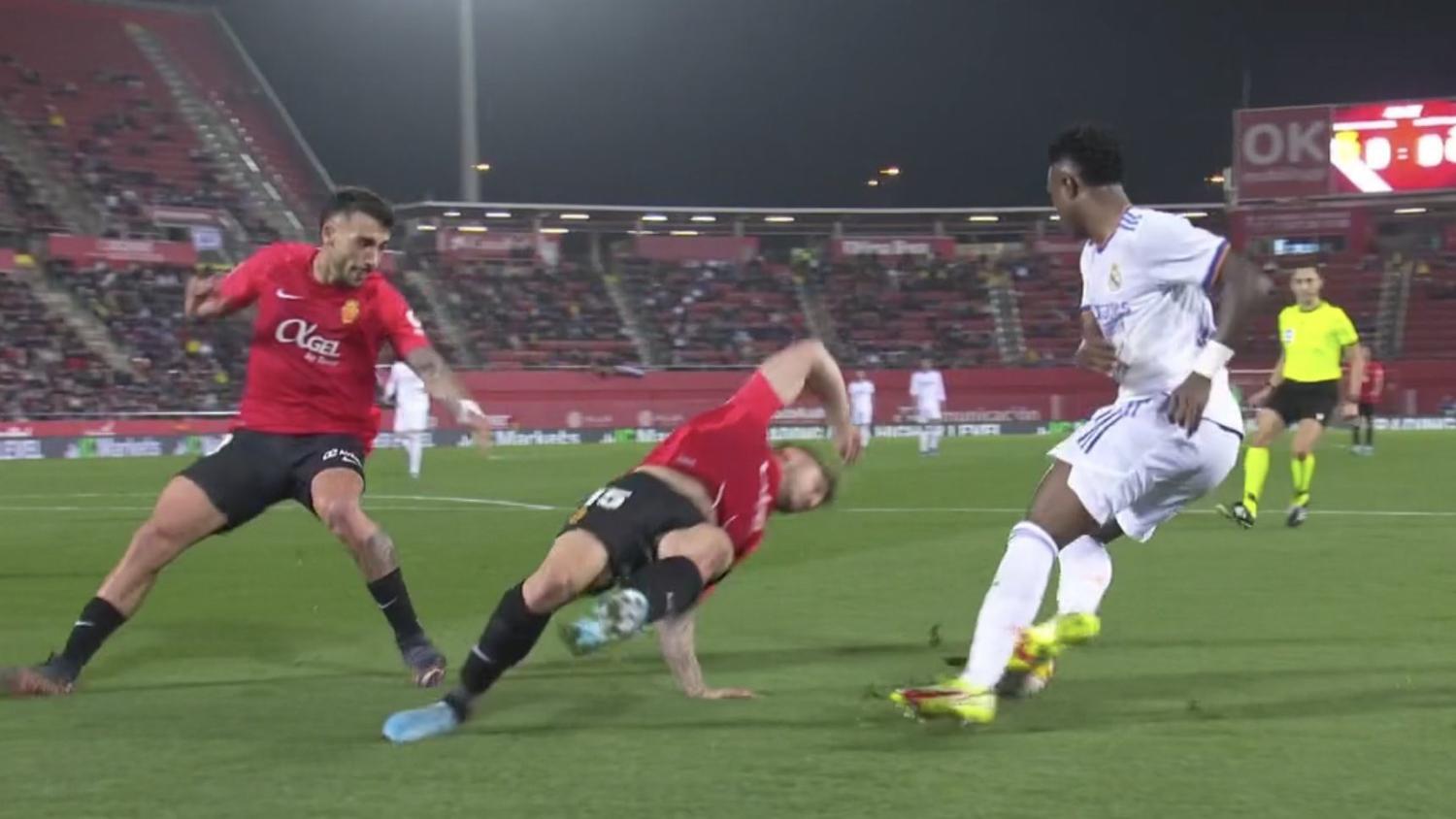 Vini scored on Monday and is also now in possession of Pablo Maffeo's soul.
The18

Vinícius Júnior's transformation this season has been well documented. The 21-year-old is now one of LaLiga's finest finishers and far more efficient in the final third, while his combination play with Ferland Mendy, Toni Kroos and Karim Benzema from Real's left-hand side makes for some of the most exciting viewing in football.

He established a consistency that had previously been missing during his first three years at the Bernabéu, but the only question was — after a 2021 portion of the season that saw the Brazilian score 12 goals and provide nine assists in 25 appearances across LaLiga and the UCL — could he continue that form for an entire campaign?

After scoring Real Madrid's opening goal on Monday in a 3-0 victory over Mallorca, Vinícius now has four goals and four assists in nine appearances across those same competitions in 2022. There's no doubting him anymore.

The referee probably could've whistled for a foul by Federico Valverde on Iddrisu Baba as Real won possession in Mallorca's third, but Vini's finish through the legs of Sergio Rico was the mark of a confident man.

Real Madrid are in front! pic.twitter.com/OZA28oDs3W

8 - Karim Benzema and Vinícius Júnior have now combined for eight goals in LaLiga this season, more than any other duo in the top five European leagues in 2021/22 (7, Florian Wirtz and Patrick Schick for Bayer Leverkusen in Bundesliga). Society. pic.twitter.com/5kjEUubvoo

The combination play between Benzema and Vinícius was again on display for the second after the Brazilian was fouled in the area while attempting to get on the end of the Frenchman's cutback. Benzema converted the resulting spot kick for a 2-0 lead.

And for the neutrals, Vinícius is arguably this season's top billing because you regularly are witness to things like this. We don't know if Pablo Maffeo is OK.

Vini sat him down pic.twitter.com/AHMVS2d87T

Benzema would add a third for Real before hobbling off injured in the 86th minute. That's terrible news for the club ahead of Sunday's Clásico against Barcelona, but if Benzema can't recover in time, it's another chance for Vinícius to grab the headlines.

Real also lost Rodrygo to what looked like a fairly serious ankle injury in the 71st minute. The 21-year-old had been included in Brazil's latest squad, alongside Vinícius, for its final two World Cup qualifiers. That could open the door for the omitted Gabriel Jesus