Penalty Kicks Always Favor The Shooter. A Keeper Reversed That For $134

Goal keeper Marwin Hitz successfully gained an advantage over a penalty kick taker with this trick, and it only cost him $134.
Photo: YouTube

Some say that stopping a penalty in soccer is the hardest thing to do in sports. There is no real penalty saving trick. The net is so large, the ball so small, and the shot is coming from such a close range that keepers must guess which way they are going to dive before the ball is hit to have a chance at saving it. Even if they dive in the correct direction it is unlikely they’ll be able to stop it. If they’re unlucky and dive the wrong direction, well, let’s just say that every keeper in the world has been left on the proverbial other side of the coin. 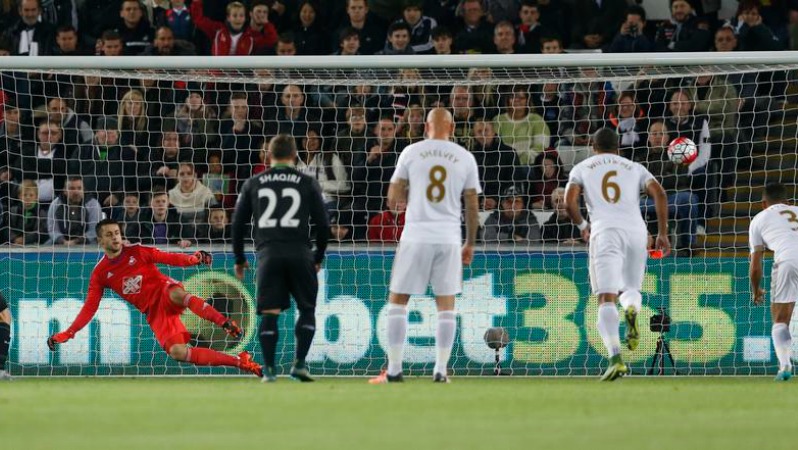 So if you were a professional goal keeper, how far would you go to get an advantage on a penalty taker? Augsburg keeper Marwin Hitz showed us his answer to that question over the weekend against Cologne in the Bundesliga. Faced with a penalty in the 61st minute, Hitz took it upon himself to sabotage the penalty spot by tearing up the turf with his heal. The tactic worked. Penalty taker Anthony Modeste slipped and couldn’t make good contact with the ball, which Hitz then saved.

Obviously Cologne was going to cry foul. According to the Guardian. The club’s head of sporting venues, Hans Rütten, sent Augsburg’s Hitz a €122.92 (around $134) bill to cover the repairs to the penalty spot he tore up.

“Strictly speaking, it was the wanton destruction of KSS property,” Rütten said. “What Marwin Hitz did had little to do with fair play. It’s not about the money. But a bit of punishment does no harm. If Marwin Hitz pays, then we will donate the amount to the children’s hospital in Cologne.”

The bill covered replacing the grass and the labor to get it done.

Hitz took the bill in stride, saying on Twitter, “With a wink, I like to pay my debts. In addition, I will make a donation to the children’s hospital.”

I guess it’s easy to take a punishment when the penalty saving trick you were punished for worked out.

Hitz has escaped punishment from the Bundesliga.