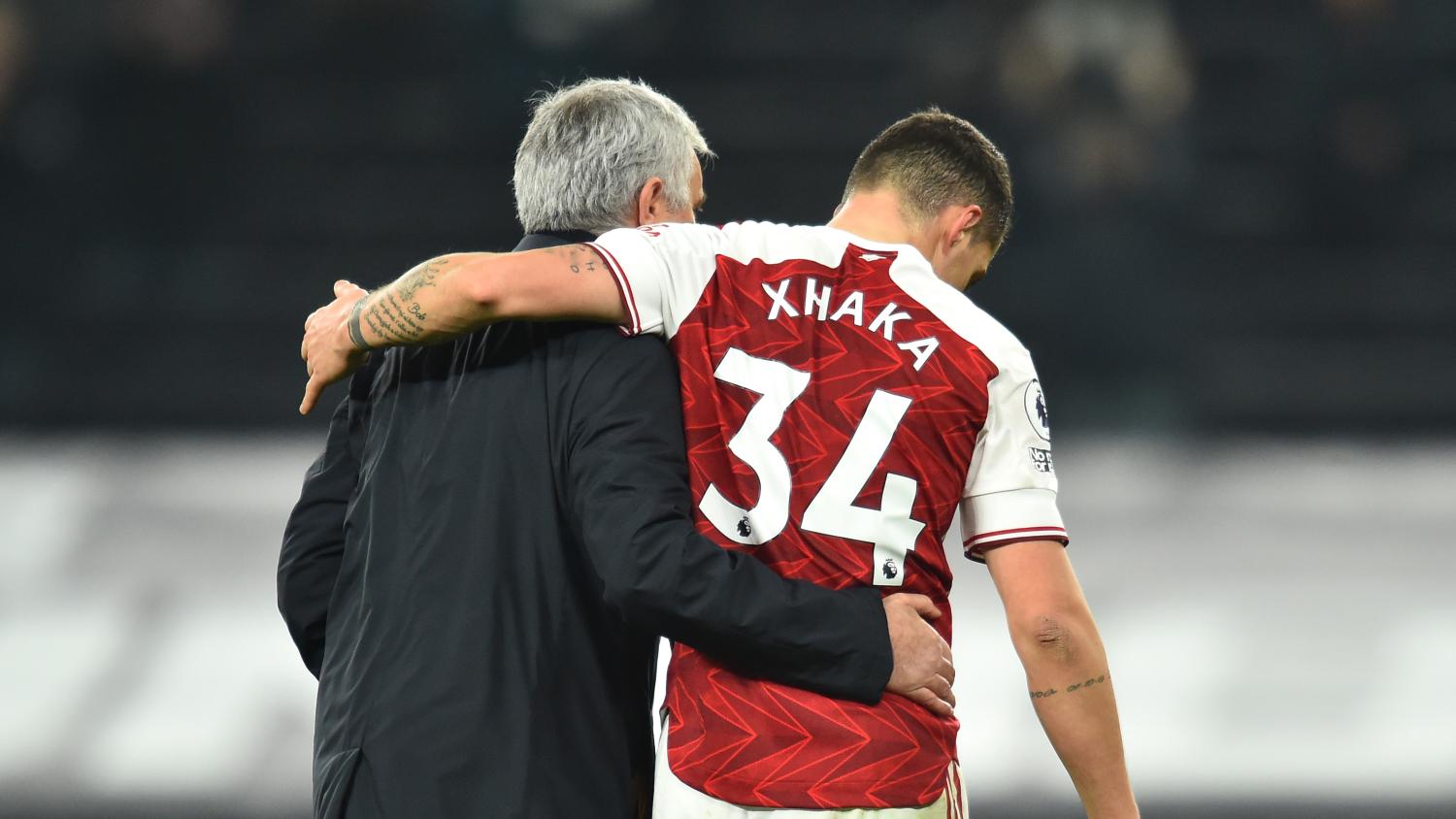 The AS Roma coach encouraged the Arsenal midfielder to ‘get the jab.’
Getty Images

I can’t tell if José Mourinho is trolling Arsenal’s Granit Xhaka, trying to encourage him to do the right thing or both, but the Mourinho Xhaka comment on Instagram has brought something to my attention I did not expect.

Xhaka tested positive for Covid-19 ahead of the international break, keeping the midfielder out of his Switzerland’s friendly with Greece on Wednesday and putting his availability for World Cup qualifiers against Italy and Northern Ireland into doubt.

While positive Covid-19 tests are nothing new in the sports world, every time a player tests positive lately, the first question many people ask is if that player has been vaccinated. When Christian Pulisic came down with Covid-19 in August, he made clear he’s vaccinated, to which he attributed his lack of symptoms.

When Xhaka got Covid, his national team told reporters he was not vaccinated.

“Granit Xhaka was not vaccinated,” Switzerland Football Association communications chief Adrian Arnold said. “He’s a player who isn’t vaccinated. We left it up to each player; it’s a personal decision of every player — just like every other person in Switzerland. We have issued a recommendation that everyone vaccinate. But he decided for himself personally. And that is also his right not to be vaccinated.”

I cannot fathom why anyone would choose not to get vaccinated (unless other medical issues prevent them from doing so). I’m not alone in thinking Xhaka might be a numbskull for not getting vaxxed, and the substantial vitriol against Xhaka for this choice resulted in the SFV president defending Xhaka, though don’t quite understand defending someone for putting themselves and others at major health risk.

Whatever Xhaka’s reasonings are to put himself and others at risk, there are a lot of people who would like to see him vaccinated, namely his Swiss and Arsenal teammates so he can return to play (though he’ll be suspended after the international break for his boneheaded red card against Manchester City).

There’s also a rival who wants Xhaka to get vaccinated: former Chelsea, Manchester United and Spurs coach José Mourinho, who has had plenty of run-ins with the former Arsenal captain.

Mourinho, currently the AS Roma boss, replied to one of Xhaka’s recent Instagram posts with “Get the jab Granit and be safe.” 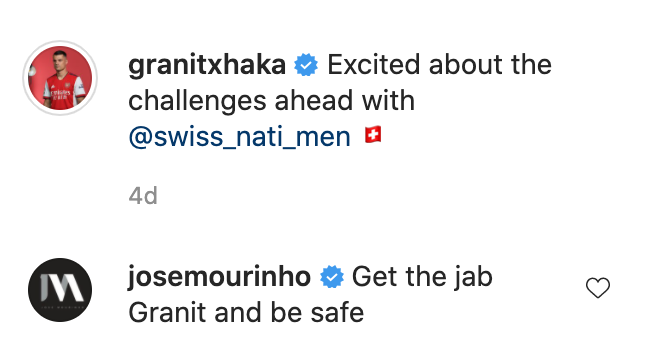 Sincerity vs. sarcasm/trolling can be hard to discern on the internet.

On the one hand, Mourinho has had so many battles against Xhaka, one could see this as mocking him for not getting vaccinated like all the scientists and doctors say to do. Mourinho is notorious for mind games, which often allowed his teams to benefit from officiating errors at the expense of Xhaka and Arsenal.

On the other, maybe Mourinho is sincerely worried about his colleague and wants to encourage him to do the right thing. Xhaka was rumored to be linked to a transfer to Roma to play for Mourinho. Such a move never materialized, though I think many Arsenal fans would have loved to see him leave.

Not long after Mourinho’s reply, Xhaka responded “thank you mister.”

It’s unclear if Xhaka will heed Mourinho’s advice and get the completely safe vaccine for the health and safety of not just himself but those around him, but we can all agree that we all want Xhaka to get healthy soon so he can return to getting red cards for Arsenal.

Until then, you should definitely get the vaccine and any potential booster shots, continue to wear a mask in public and, in the words of Mourinho, be safe.