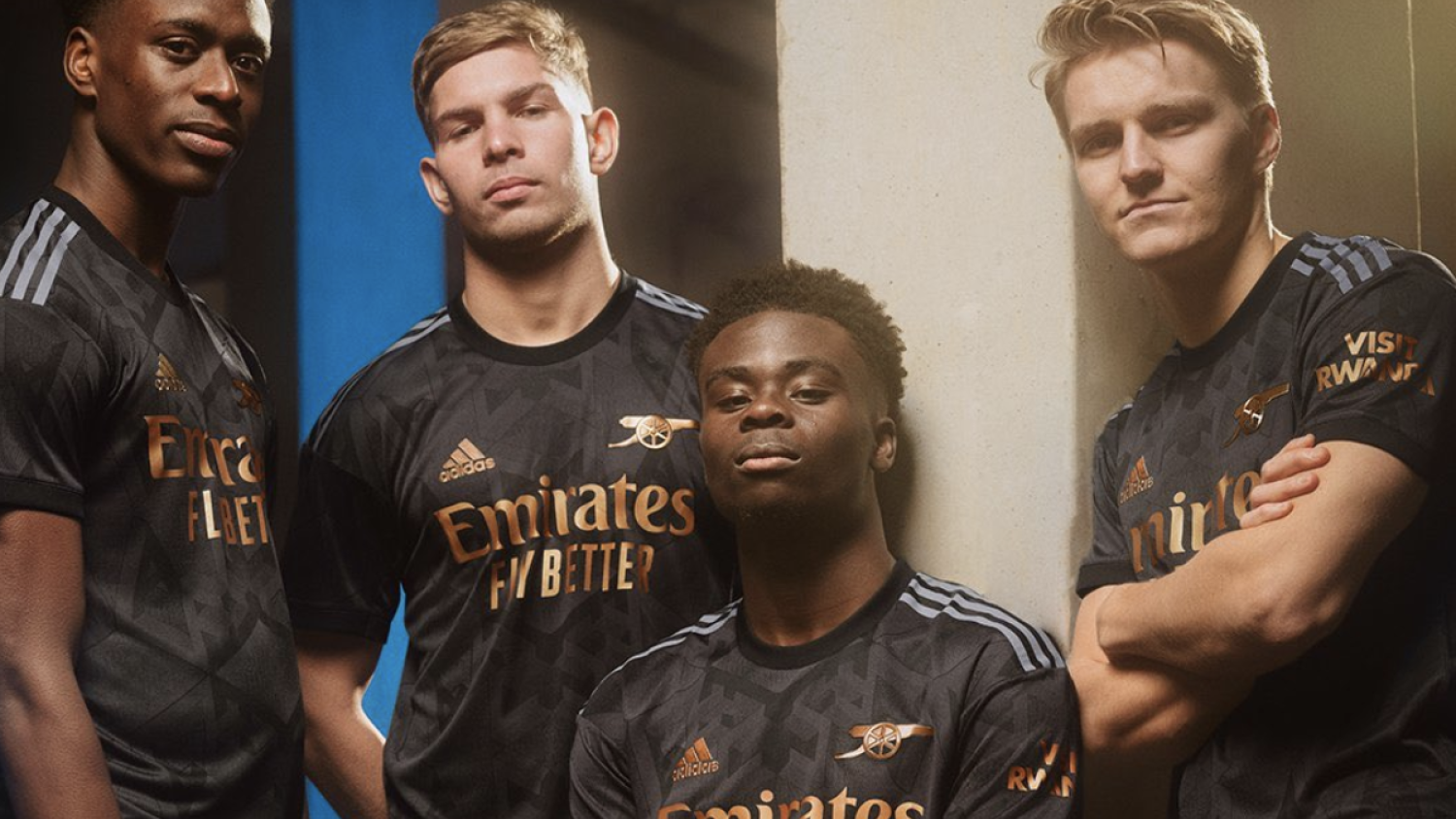 Some teams really know how to design a kit, and some really do not.
Twitter

These days, soccer jerseys are more than just a colored shirt your favorite team plays in. They’re a way to express yourself, who you are and what the sport means to you. It's fashion, it's style, it's a way of life. Every year, clubs release their new home, away and third kits to much scrutiny, and while some are instant classics, many are destined for a life in the back of someone's closet, never to be worn again. With the Premier League well and truly underway today, what better time to decide who is going into this season with the best Premier League jerseys?

Brighton pairs an atrocious home kit with an away kit that makes no sense. The home features what seems to be a fairly standard striped pattern. That is until you notice the giant ‘H’ it creates in the negative space. Is it ‘H’ for home? Who knows, but it looks terrible. The bright orange away kit with a black and white badge guarantees that Brighton will look bad both home and away this season.

A sub-par home kit and one of the ugliest away kits in years spells disaster for any club, but for Everton, it's just the beginning. The leaked images of its third kit are nauseating. Bright yellow, weird pattern and a plain shield instead of its badge? Hummel has had an absolute nightmare.

Southampton is up now, and it's a smaller nightmare from Hummel, but only slightly. The home kit has binned the traditional red and white stripes, opting for a singular red stripe on a white shirt. Not terrible, but not great. The away shirt, however, seems to be this season’s marmite kit. Whether you find it to be good or bad seems to be personal preference, but it feels less like a soccer kit and more like a forced attempt to try something cool. It may look better on the pitch or in person, but at first glance, it looks like a turquoise mess.

A first outing for our home kit tonight!

Orange and black can be an incredible color scheme. Wolves, however, found a way to make it boring. Absolutely no character in the home and a teal away with some weird geometric pattern that allegedly represents some part of its stadium. The only thing that could save it may be the third, which looks a bit better in the leaked images, but it's difficult to tell.

Spurs have officially released their new home kit for the upcoming 2022/23 season...

Ready for the Champions League! pic.twitter.com/Rw8QR8YF0p

The first genuinely good kit on this list is Spurs' new home shirt. Sleek and modern while screaming “Spurs,” Nike hit the jackpot on this one. Unfortunately for the north London club, the away shirt and third shirt undo everything and just ruin the collection. Seriously, what were they thinking? Garish and distracting, the away shirt is easily my pick for the worst kit of the season. Better luck next year, Spurs fans.

The 2022/23 Aston Villa home kit has arrived, available online now and in-store from 8am on Saturday, July 9. #BetterNeverStops

None of Villa’s kits are good, but they’re also not terrible. Exceedingly drab, Overwhelmingly underwhelming. Not one exciting thread in the bunch. Unfortunate.

Chelsea’s home kit this season is painfully plain. Completely blue, with a bit of pattern on the collar and one of the most obnoxious sponsors in the league, the collection is only saved by the away shirt featuring the same pattern on the home kit’s collar, but instead in horizontal stripes around the chest. The “sesame” third kit feels out of place and adds nothing to the overall experience. Only the away kit looks like it may be popular among fans for years to come. Maybe.

This kit collection is marred by poor design choices on every shirt. The home collar is terrible; use an actual collar. Also, what's up with the random gold badge and adidas logo? Speaking of gold, the away kit is primarily black with ugly gold accents. What about the third kit, you ask? You’ll never guess: more gold! Why? I don't know!

Ready for the new campaign.

Our 2022/23 Castore away kit will be available to purchase both in-store and online from 10am tomorrow.#BetterNeverStops

Another plain jersey collection, Newcastle's home shirt is slightly above average, but it's joined by a monstrosity of an away shirt and a decent third. However, all three have one thing in common: a terrible sponsor logo that ruins the collection completely.

While not as good as last year’s kit that saw them win the Championship, this season’s edition is solid and doesn’t mess with tradition. The away is an overly busy adidas template design that makes it look more like a goalkeeper kit than an outfield one. Still not atrocious but not great either.

Next up is a genuine title contender and template kits have struck again. Red on red on more red looks clean, yes, but maybe a touch of white on the collar? Or on the top bit of the shirt? Regardless, it’s definitely a solid shirt, pun intended. The real issue is the away kit, which should come with a prescription for vertigo. With too many colors and too many complicated patterns, it looks like it was designed by Dan Flashes.

x x Everyone Together@afcbournemouth's third kit is inspired by an award-winning campaign Everyone Together, which aims to tackle prejudice and promote understanding pic.twitter.com/mye4PGH5gN

Bournemouth tried something with its kits this season and they turned out OK. They feature a bold pattern on the home shirt that doesn’t really work and an away shirt that also doesn’t really look the part, but the third kit is sublime. A genuine contender for kit of the year, the black shirt features subtle white and gold accents and is inspired by the club’s "Everyone, Together" campaign, which aims to drive out prejudice in the community. Truly remarkable.

Leeds have released their 22/23 Away Kit by Adidas.

Another home kit that has strict tradition associated with it, adidas has done well to not mess up with Leeds. The away kit is another marmite shirt; you either love it or hate it. With a stained, tie-dye-esque pattern on a faded yellow base, it certainly is unique. Is it my favorite kit in the world? Absolutely not. Do I want one with either Aaronson or Adams on the back? Without a doubt.

More needs to be said about Brentford wearing last year's kit and choosing not to fleece their fans https://t.co/Hp37f8Veb8

Brentford has barely above-average kits this season, but it is being given a raise for a bold move it made: deciding to reuse the home jersey for a second season to save fans money. The away also features a vintage club badge, which looks extremely sharp.

A picture of West Ham’s new away kit has been leaked to social media.

Huge fan of this I have to say!

West ham did what Aston Villa should have done. A traditional claret home shirt accentuated by light blue patterns on the shoulders gives the kit character that other ones maybe lack. It is paired with an away shirt that is primarily black with white trim and a multicolor pattern on the sleeve cuffs. The club is only missing a third shirt, which should be sky blue or white to avoid any color conflicts, but that should be released soon.

Next up is a game of brilliant, brilliant trash. It’s like duck, duck, goose, but way worse. City opted for a classy sky blue home kit featuring a central logo. Brilliant. The away is a callback to vintage kits of the past with red and black stripes inspired by AC Milan. Brilliant. The third kit is radioactive neon green with weird horizontal lines across the front. It looks like it got run over by a three-wheeled motorcycle. Just shocking. Trash. Here’s to hoping we don’t have to look at it too much this season and can instead focus on the fantastic home and away kits.

#NFFC have released their home kit for the Premier League season.

Introducing our new away kit for the 2022/23 @premierleague season

Pre-order our new @MacronSports away kit from 5pm today

Nottingham Forest is back in the Premier League following a 23-year absence, and boy, are they doing it in style. A gorgeous home shirt, and somehow an even better third kit is only penalized slightly because of the away. It's not even bad, it just isn’t as great as the other two.

Crystal Palace and Macron have done wonders with these three kits this season. pic.twitter.com/l2t4hkWn89

Manchester United’s new Adidas away shirt for the 2022/23 season.

Rate this kit out of 10. pic.twitter.com/G6zRkp6y4i

Another synchronized effort, Manchester United’s kits are as vintage as they come. A collar that can be popped, a border around the badges and subtle accents on every shirt are just a recipe for success. If the third kit was black instead of bright yellow, the collection would be a 10/10, but alas, the shirt is yellow, and United has to settle for second best.

Arsenal have absolutely nailed their kit collection for this season pic.twitter.com/mseo18oR3b

Arsenal is a perennial contender for kits of the year. The club effortlessly blends fashion with function and this year is no exception. A classic home kit, a truly perfect away kit and a third kit begging to be worn around town. Perfection from the Gunners, once again.