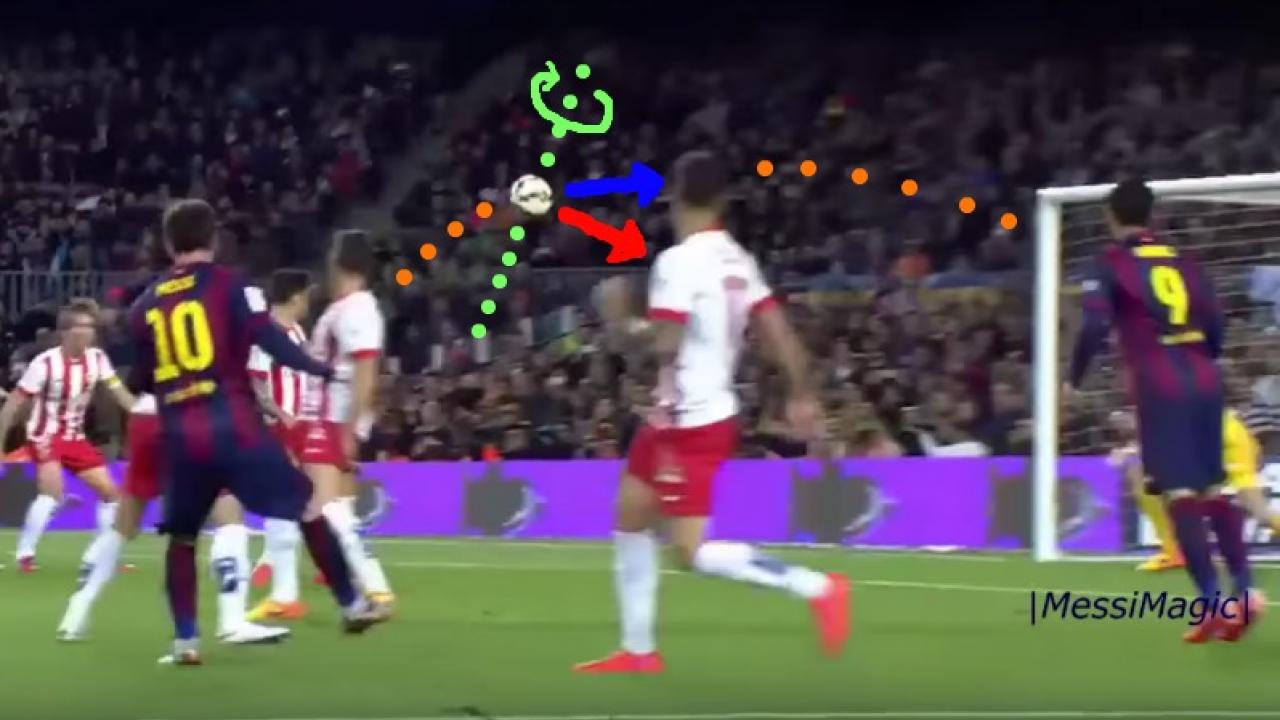 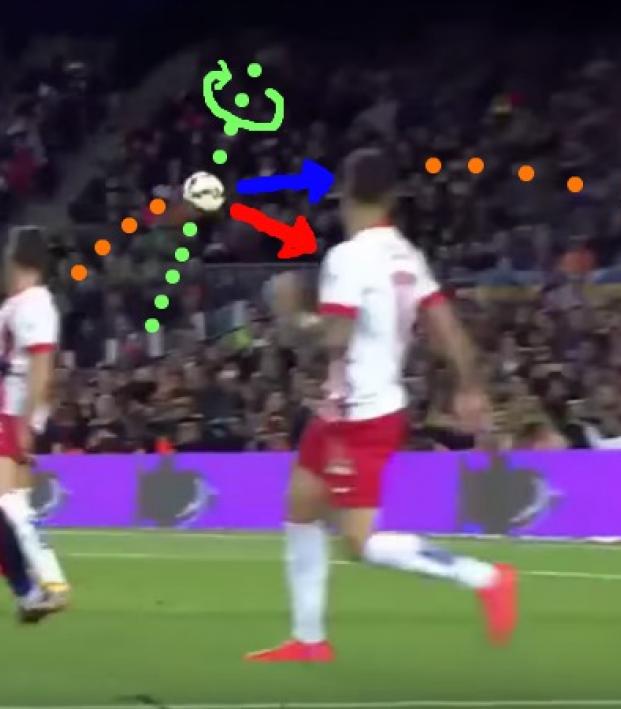 Ivan Anich January 28, 2016
How does he do that?!? We break down the science behind how Messi curves the ball through the air in some of his best goals.

Sir Arthur C. Clarke – a British author and inventor – once said, “Any sufficiently advanced technology is indistinguishable from magic.” So, before we break the spell of Messi’s magic by explaining the physics (a.k.a. “technology”) behind his insane curved goals, we’ll let you revel in them one last time. Behold:

Some say that the mark of a truly great player is their ability to control the ball and not be controlled by it. “The ball control me?” you might say. “Preposterous!” But that is exactly what happens when we take a bad touch and react to it, or slow down while sprinting with the ball at our feet so we don’t lose it. Messi rarely suffers either of those clear indications of a lack of control. He is always in control, and the realm of Messi’s control extends into the sky.

The answer to that is quite simple, and many of you have probably already said it out loud or thought it to yourself: it’s spin. Messi can control the ball while it is in the air because of the spin he puts on the ball. If you have played soccer, this is no surprise to you. But have you ever wondered how putting spin on the ball actually makes the ball curve in the air?

It’s a fascinating thing to think about. Watching Messi’s best curved goals, the ball clearly begins its flight traveling in one direction, then curves and changes direction, and ends up traveling in a completely different direction. It’s as if something moved the ball while it was in the air, which is confusing, to say the least.

Try this: stand up, put your hand on your chest, and using your hand try to push yourself over. You can’t. It’s impossible. The laws of physics say it is impossible: a body cannot exert a force on itself.

So it seems that if the spin on the ball does cause it to push or pull itself, well, then I was wrong before: the ball is breaking the laws physics, and Messi is clearly a master of making it doing so.

So how do we solve this seemingly impossible problem? How do we explain how a ball’s own spin can cause it to change direction as it moves through the air? The answer is literally right in front of us: it’s the air that pushes and pulls the ball. More specifically, the spin of the ball makes the air push and pull on the ball, which forces the ball to curve in the air.

It all starts with drag. Drag, simply speaking, is friction with the air. We all know what friction is. When we pick things up with our hands, friction is what prevents it from slipping in our grip. We feel friction when we slide our feet across the floor. Drag resists motion through the air just like friction resists motion, but a very important difference is that drag resists an object more and more the faster that object moves through the air.

Imagine you are running outside and a gust of wind hits you in the face. That feeling of being slowed down by the wind is due to drag. It’s more noticeable when there is a gust of wind, but drag is there anytime we move, because air is everywhere around us (hopefully, shout out to deep sea divers). The faster we move, or the harder the wind blows at us, the more drag exerts a force on us. The same thing applies to a ball moving through the air.

Now, there is a special kind of drag called skin friction that we have to understand to answer the question: how does a ball curve in the air? Skin friction is the drag felt by an object along its sides. Remember that gust of wind that hit you? Most of the force you felt hit you in the face, across your chest and stomach and the front of your body. But the gust of wind also produced a little force as it passed across the sides of your head, of your arms, of your chest and of your legs. That force was the air dragging against the sides of your body. That drag along the sides is called skin friction, and it is what allows spin to change the direction of a ball.

To explain: When a ball flies through the air, the air doesn’t just exert a force on the ball because of drag, the ball also exerts a force on the air because of drag. This is a basic law of nature – every action has an equal and opposite reaction – that often has very serious and complicated consequences. What is important to understand here is that when a ball travels through the air, it interacts with and moves the air around it. 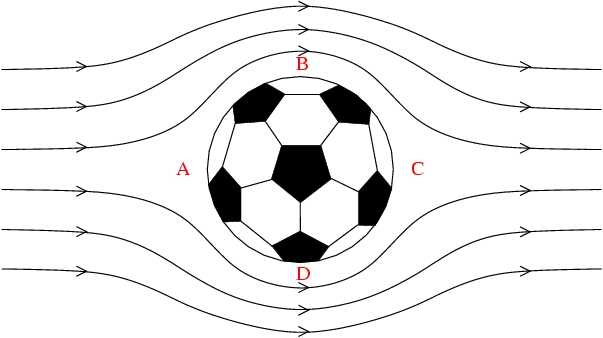 In the diagram above the flow of air is represented by thin black lines. As you can see, the air split by the ball as it flies through the air to the left. As the split air passes across the ball, skin friction will drag against the sides of the ball (at the locations of B and D in the diagram above). And because every action has an equal an opposite reaction, the air closest to the ball will actually slow down as it drags against the sides of the ball at (B an D). 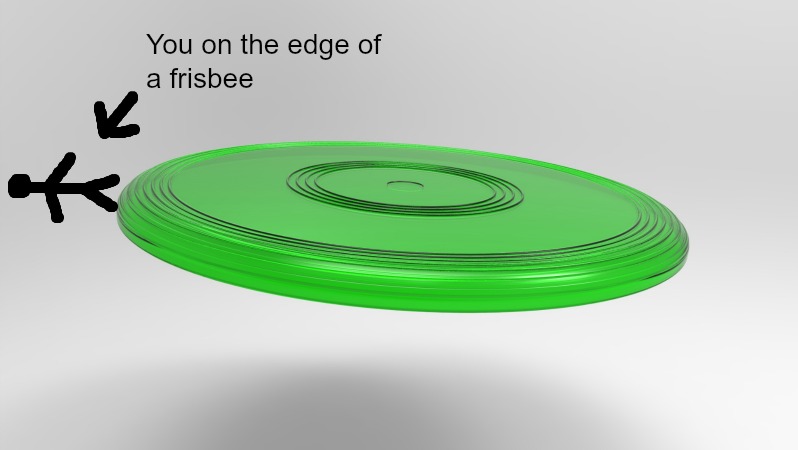 We are about to tie all of this together, so let’s go over all of what we have learned.

How Does A Ball Curve In The Air? Key Facts:

Yes, we just summarized everything we have discussed so far into three sentences. We are now ready to learn really what makes a spinning ball curve in the air.

Bernoulli’s principle also states that when the speed of air increases, pressure decreases. So, on the side of the ball the that the air is moving faster (because that side is spinning away from the direction the ball is flying, with the flow of air) the air is decreased in pressure.

Now You Know The Science. Try It Yourself! 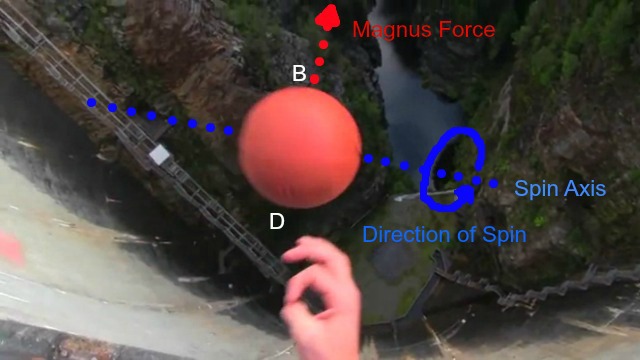 In Messi’s best curved goals — in all of Messi’s curved goals, for that matter — this same Magnus effect is present. The spin of the ball deceases pressure on one side of the ball and increases it on the other, and the resulting difference in pressure exerts the Magnus force which moves the ball so it curves through the air.

Espanyol recently experienced Messi’s mastery of the Magnus effect and the Magnus force the hard way when Messi scored one of the best free kicks of the season.

When they broke down how Messi scored that goal, I doubt they ended up with a picture that looked like this: 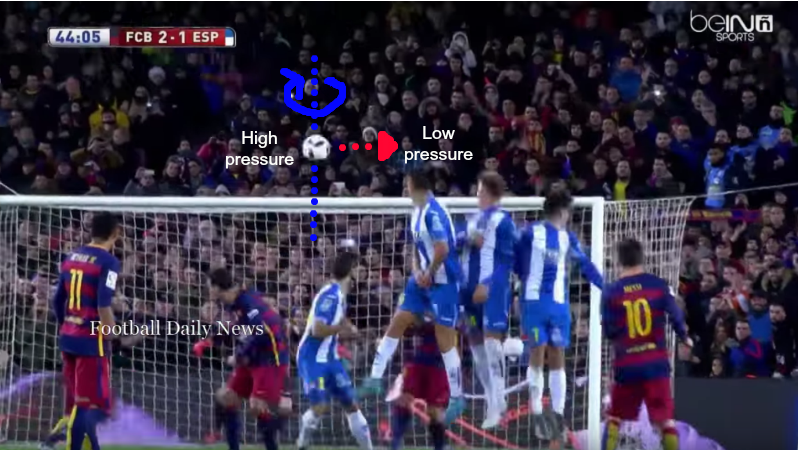 And perhaps that was for the best, because the genius of Messi goes so far beyond his ability to make the ball curve in the air. 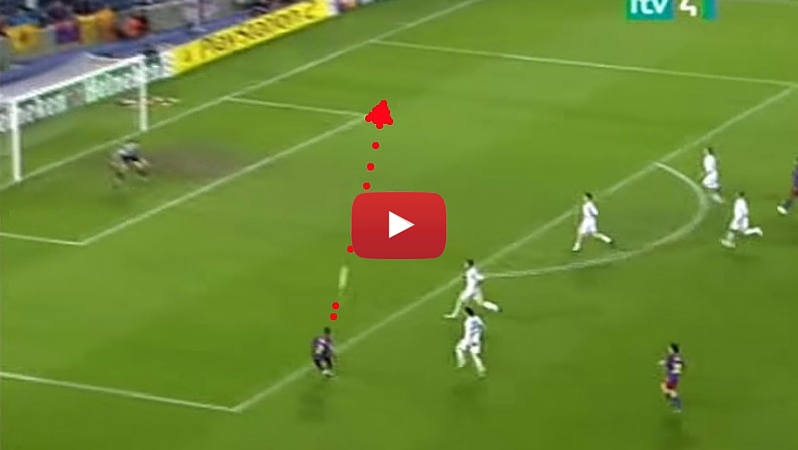 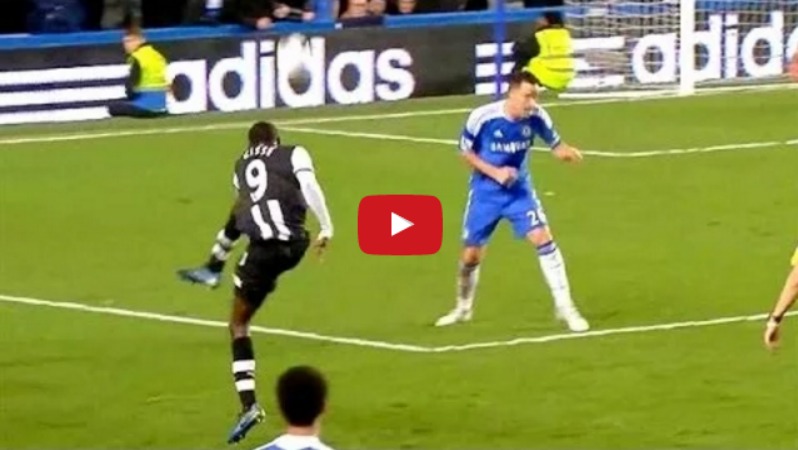