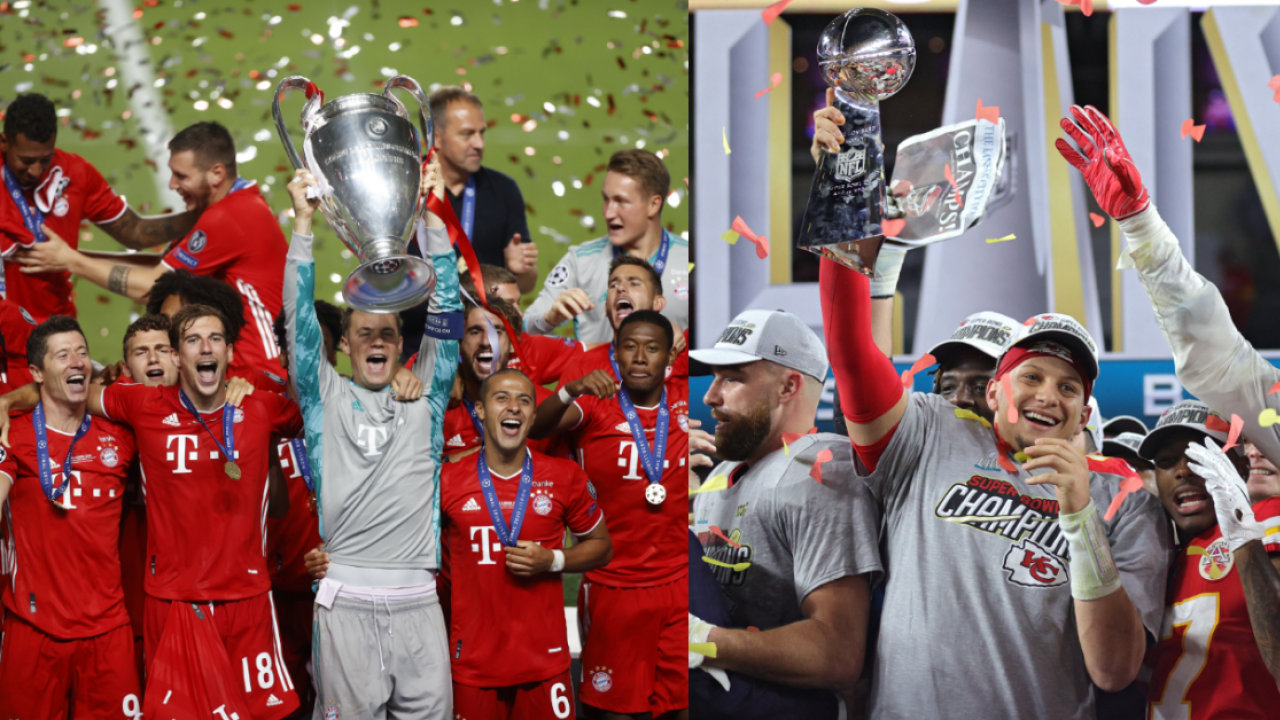 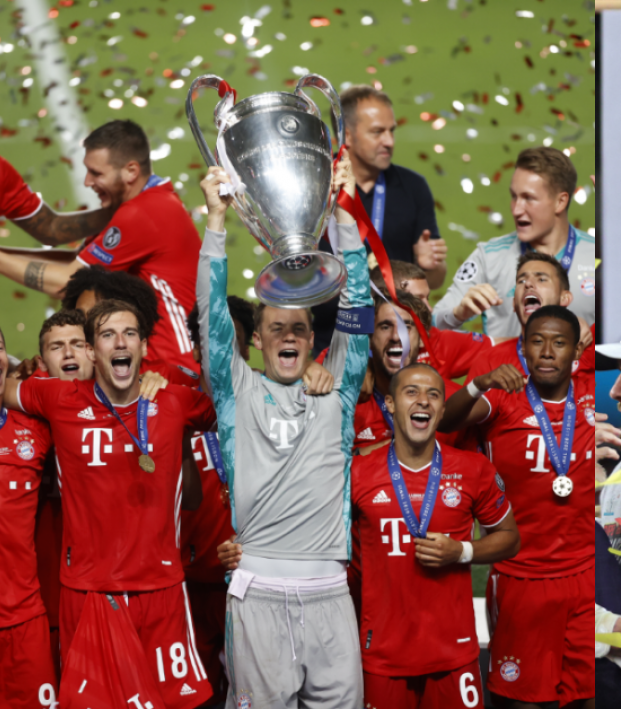 Super Bowl Vs. Champions League: Which Esteemed Competition Is More Difficult To Win?

With Super Bowl Sunday approaching and the UEFA Champions League knockout stage just around the corner, it's time to make a definitive comparison of two of the most popular sporting competitions in the world.

Using advanced analysis, statistical comparison and cross-sport know-how, we will determine once and for all which competition is more difficult to win: the UEFA Champions League or the National Football League's Super Bowl.

For our purposes, we will be starting our investigation in 1997-98, as the format for both the NFL playoffs and Champions League has remained mostly unchanged since then.

Except for a few minor seeding adjustments, the NFL playoffs have remained relatively consistent since 1990 (except for this year). The four division winners and two best wild card teams in each conference make the playoffs, with the top two in each league receiving a first-round bye.

The UCL has made more recent changes, and beginning in 1997-98, the competition began to more closely resemble the one we know today. That season was the first to have multiple entrants from the same country and expanded to six groups of four. Since then, the group stage has added two more groups, bringing the total to 32 clubs, while the knockout stage has similarly expanded to 16 teams. The qualifying rounds have also been broadened significantly in the 21st century, but no team has ever won the cup while qualifying through a playoff.

Since 1997-98, the Champions League has nine unique winners, with six of those sides winning it more than once. Only Real Madrid has successfully defended its title, winning the final three times in a row from 2016-18. The NFL has seen 13 different teams win the Super Bowl, with just five repeat winners. The Broncos and Patriots are the only two sides to win back-to-back titles during this stretch.

In terms of the number of finalists, 18 sides in total have reached the Champions League final during this period, with 10 of them playing in it more than once. For the NFL, 20 different teams have played in the Super Bowl, with 12 teams contesting for the Lombardi Trophy multiple times.

Some of this can be chalked down to the length of the competitions. Following a six-match group stage, a Champions League team must come out on top over the course of six knockout-stage matches in order to reach the final. In the NFL, after a 16-game season, teams either play two or three contests to qualify for the Super Bowl.

A shorter playoff/knockout stage leads to more favorable conditions for upsets to occur.

"Underdog" is a very loose term, but an NFL underdog can be classified as a team that was unfavored at either the beginning of the season or at the start of the playoffs (often a wildcard team) but managed to win the Super Bowl. The same framework can be applied in the Champions League at the start of the knockout stages and for the final.

European soccer has seen a few dark horses win the Champions League in recent seasons. In 2012, Chelsea won the UCL while finishing sixth in the Premier League. Manager André Villas-Boas was sacked in March, replaced by Roberto Di Matteo. While Di Matteo's league form was unremarkable, he somehow managed one of the most remarkable UCL runs in the history of the competition.

He helped the Blues come back from a 3-1 first-leg defeat against Napoli in the Round of 16, then defeated Barcelona in the semis and Bayern Munich in the final, despite being thoroughly out-played in both matches.

Liverpool was another significant underdog in the 2005 final. The Reds finished fifth in the league, a full 37 points behind champion Chelsea, ironically the team it managed to beat in the semifinals, while also defeating Italian title-winner Juventus in the quarterfinals. In the final, the Reds defeated an AC Milan side that featured a catalogue of superstars, such as Andrea Pirlo, Paolo Maldini, Kaká and Andriy Shevchenko.

The biggest Champions League underdog to win the trophy in the modern era of the competition is likely Porto in 2003-04. Managed by Jose Mourinho, the Portuguese champions are the only club in the last 25 seasons to win the tournament without being from one of the "Big 5" countries. Even after defeating Monaco 3-0 in the final, Porto only managed to climb as high as 11th in the UEFA Club Coefficient rankings.

In American football, underdogs are a little easier to determine. Five wildcard teams in the past 23 years have won the Super Bowl: the Denver Broncos in 1997-98 (despite having the second-best record in the AFC), Baltimore Ravens in 2000-01, Pittsburgh Steelers in 05-06 (the first team to win three playoff games on the road before winning the Super Bowl), New York Giants in 06-07 and Green Bay Packers in 09-10.

A couple other NFL teams deserve mention for being significant underdogs, either entering the season or the Super Bowl.

The 1999 St. Louis Rams were 4-12 the previous season and lost starting quarterback Trent Green to a season-ending injury before the first game. But led by QB Kurt Warner, who had previously played in the Indoor Football League and NFL Europe, the Rams offense set NFL records and became known as "The Greatest Show On Turf," with Warner winning regular season and Super Bowl MVP.

The biggest Super Bowl underdog of the last 25 years by point spread is actually Tom Brady's New England Patriots when they faced the Rams in the Super Bowl in February 2002. Brady finished with a 11-5 record in his first season as a starter, a six-win improvement on the previous season, yet the Pats were still 14-point underdogs against The Greatest Show On Turf in the title game. The Patriots won, 20-17, making it the biggest Super Bowl upset since 1968.

With all this talk about underdogs, the next logical step would be to examine betting odds for both the NFL and Champions League.

In the Champions League, the contenders have about the same odds as they do in the NFL: about 15-1 or better, but the top sides usually have better odds than they would in the NFL, with odds reaching into the 4-1 and even 3-1 range.

Last season, Manchester City was a 16-5 favorite to win the UCL (3.2-1), while the preseason Super Bowl favorite New England Patriots were only 7-1.

An even bigger difference can be seen at the back end of the competition, where Champions League long-shots have even longer odds than their American counterparts.

In the NFL, around half-a-dozen teams will have worse than 100-1 odds. In soccer, some sportsbooks will just give 100-1 odds for the teams that only have a prayer of making the final — which often includes half the field (16 teams). Other times, odds reach as high as 1,000-1 or even 2,000-1. Even with these systems, around half of the field still has 100-1 odds or worse, with median odds sitting around 100-1.

The NFL has a slight advantage in parity, with a higher number of unique champions over the past 23 years, fewer repeat winners and a narrow advantage in terms of the number of teams to reach the championship game. A shorter playoff round means the NFL sees more variation than the Champions League, as luck becomes a bigger factor.

It would make sense then that the NFL has seen more underdog teams win the title, as teams that were considerable long-shots either entering the season, playoffs or Super Bowl have won around a third of the Lombardi Trophies since 1997. Champions League underdogs won the competition with much less frequency.

This brings us to preseason odds, likely the most telling category of all. While Champions League favorites have slightly better odds than NFL favorites, UCL longshots have much worse odds than NFL bottom-feeders and significantly more teams are considered longshots in the UCL versus the NFL.

The UEFA Champions League is more difficult to win than an NFL Super Bowl.