What Countries Have Qualified For The World Cup? Complete And Updated List

Before expanding to 48 nations for the 2026 FIFA World Cup, the 2022 competition in Qatar represents the final tournament with 32 competing teams and the cutthroat qualifying cycle that comes with it. With just under a year until kick off on Nov. 21, 2022, what countries have qualified for the World Cup?

Including the host nation of Qatar, we already know 13 of the competing teams at the 2022 World Cup, and the remaining 19 spots are going to fill up quickly over the coming months. We’ll keep this list updated and current for your reading pleasure.

South Africa Claims It Was ‘Robbed’ By Penalty Call, Wants Replay Against Ghana

CAPE TOWN — South Africa will make a formal complaint to the Confederation of African Football (CAF) and global soccer governing body FIFA over the officiating in its 1-0 away defeat by Ghana in the African World Cup qualifiers on Sunday.

The result meant Ghana leapfrogged their opponents to take top spot in Group G and advance to the final qualifying stage in March, where they will hope to be one of five teams from the continent to book their place at Qatar 2022.

Mohamed Salah Will Now Be Taught In Egyptian Textbooks

Mohamed Salah, the greatest African goal scorer in the history of the Premier League, is now a part of the curriculum for primary and secondary school children in Egypt.

USMNT’s 2009 Confederations Cup Team Was One Of A Kind — So Where Are They Now?

The 2009 Confederations Cup was simultaneously the closest the USMNT has come to a major international trophy and a near abject failure. Bob Bradley’s Americans were extremely lucky to escape the group stage but then came within a Lucio header of global glory. A dozen years later, where are those USMNT players? Many of them remain fixtures on our TVs — not all as players, but as pundits. Others now fill the ranks of coaching and technical staffs at clubs around the world.

If he were American, Didier Drogba would probably still be the starting striker for the USMNT. Instead, the 43-year-old former Chelsea star is spending this international break holding a charity match with his former club, Marseille. Even three years after he retired as a member of Phoenix Rising in the USL Championship, the Ivory Coast international’s still got it.

Samir Nasri, on the other hand, has been enjoying his retirement quite a bit, the 34-year-old having only announced he’s leaving the game a few weeks ago.

Is It Time To Crown Mohamed Salah As The World’s Best Footballer?

Liverpool and Manchester City stood toe-to-toe at Anfield on Sunday afternoon, exchanging haymakers and glorious bits of skill in an end-to-end classic that ended 2-2 after an exchange of four second-half goals.

City carved the best opportunities of the first half with Phil Foden tormenting stand-in right back James Milner and Bernardo Silva at his freakish best. This dribble from Silva in the 20th minute deserved a finish from Foden.

We have a Puskás Award contender from Ghana after Mizak Asante, age 15, split three defenders, left another on his backside, dribbled past the keeper in the tightest of spaces and roofed a finish over two defenders on the goal-line.

It's a slow burn that gets better and better as it goes. 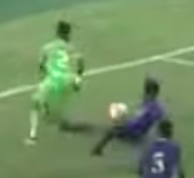 DAR-ES-SALAAM - Tanzania were awarded one of the fastest penalties in international football after five seconds of Tuesday’s World Cup qualifier against Madagascar.

Ugandan referee Mashood Ssali pointed to the spot when a long ball from kickoff was chased by Tanzania’s Simon Mvusa, who was clumsily clattered into by Malagasy goalkeeper Melvin Adrien, who plays club football in France’s fourth division.

With Euros, Copa America And Gold Cup Done, All Eyes Are On Africa After AFCON Draw

Defending champions Algeria were drawn with the Ivory Coast in a tough group for next January’s Africa Cup of Nations finals while hosts Cameroon will kick off the tournament against Burkina Faso.

The AFCON 2021 draw is complete. What are your thoughts? #TotalEnergiesAFCON pic.twitter.com/BpGScc0sJL

More than a few eyebrows would have been raised at the news of Lassina Traoré's move to Shakhtar Donetsk this summer. Just two years after he joined Ajax from the youth side of the Dutch giant's affiliate in Cape Town, Traoré made the $12 million move to Ukraine as one of the first signings of new manager Roberto De Zerbi, who left Sassuolo to take up the post.