Chelsea rolled into the FA Cup quarterfinals with Olivier Giroud scoring his first goal for the club in an emphatic 4-0 victory over Hull City at Stamford Bridge. The 62nd minute also saw the introduction of Kyle Scott, a U.S. U-20, for his club debut.

The 20-year-old midfielder was born in Bath, England, and has been with Chelsea since joining from Southampton at the U-10 level, but he’s represented the United States at both the U-18 and U-20 levels. As well as the U.S. and England, he’s also eligible to represent the Republic of Ireland or Italy, so we’ll see how that plays out. 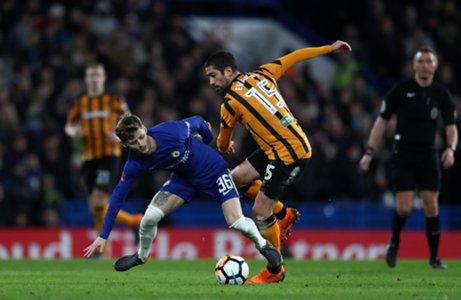 Regardless, Scott is a hugely talented midfielder who’s excelled for Chelsea in both the FA Youth Cup and UEFA Youth League, and he’s currently under contract at the club until the end of the 2018-19 season.

He replaced Cesc Fabregas and recorded 42 touches in a little under a half hour of action. He also completed nearly 94 percent of his passes, although he was booked in the 82nd minute for a pretty rash challenge.

Kyle Scott is known for his technical ability, comfort on the ball, and short passing. But the slightly built 20 year old American midfielder also showed he's not afraid to put in a challenge, earning an 82nd minute yellow card in his #CFC debut. #CHEHUL #ChelseaFC #USYNT #USMNT pic.twitter.com/m4aFR07I3H