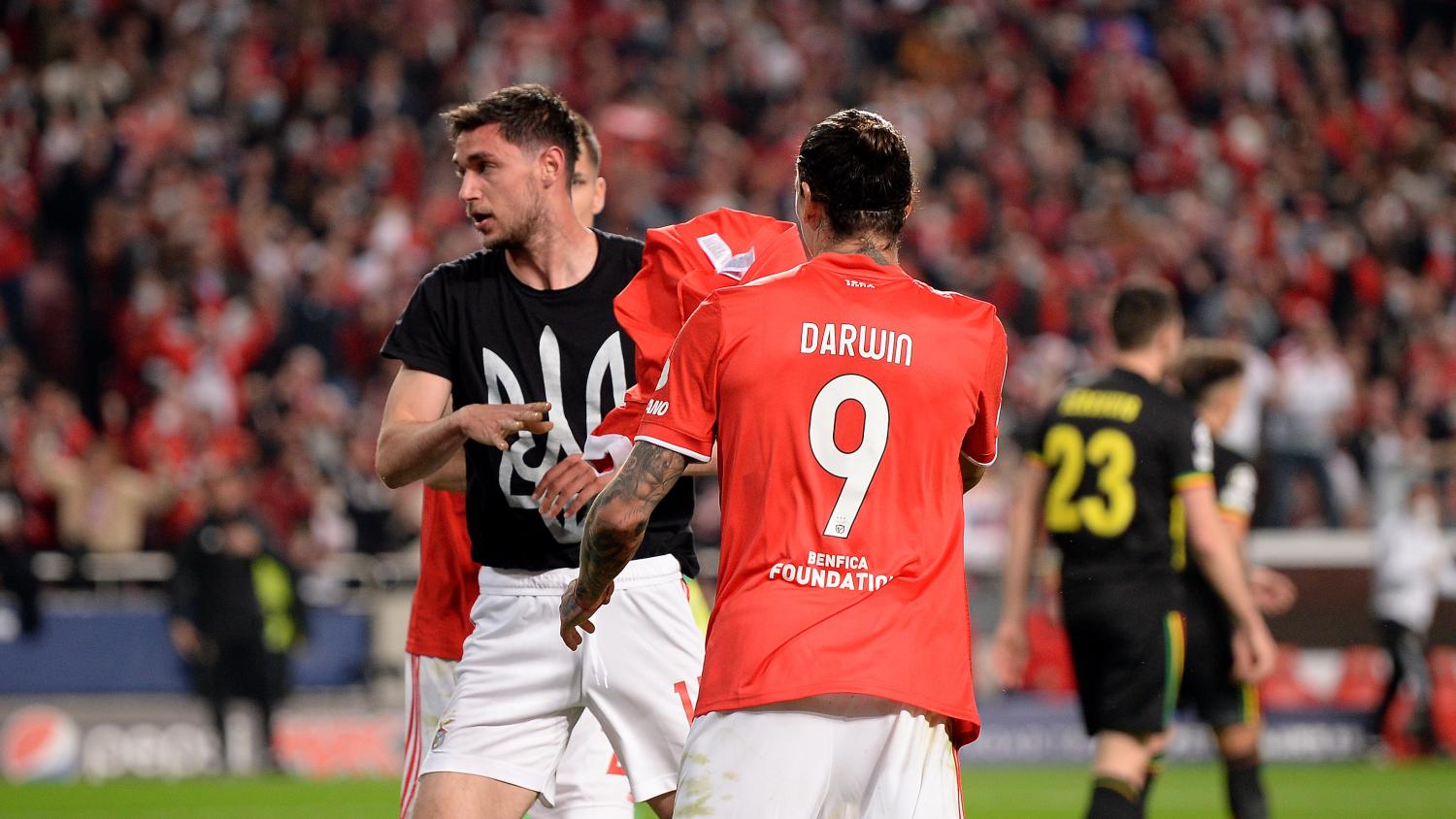 A Roman Yaremchuk Ukraine shirt celebration during Benfica’s 2-2 draw with Ajax in the Champions League caught the attention of fans on Wednesday. With Yaremchuk’s side trailing, the 26-year-old striker was able to bundle in a rebound in the 72nd minute to tie the game. He celebrated the goal appropriately.

What a game it has been at the Estadio da Luz!

Yaremchuk wore the trident of Ukraine under his Benfica jersey. This is Ukraine’s coat of arms. You’ve got to give him credit for seizing the moment on European soccer’s biggest stage. The Ukrainian was brought on as a substitute in the 62nd minute and got his goal 10 minutes later.

Soccer players that represent the Ukrainian national team have had a difficult week playing for their respective clubs while also worrying about their homeland. Vladimir Putin’s latest efforts of recognizing two Eastern regions of Ukraine have stirred fears of a full-scale invasion.

Manchester City star Oleksandr Zinchenko vocalized his displeasure with the situation on Instagram.

“The whole civilized world is worried about the situation in my country. I can't stay away and try to convey my opinion. In the photo - my country. The country where I was born and raised. A country whose colors I defend in the international sports arena. A country that we try to glorify and develop. A country whose borders must remain inviolable. My country belongs to Ukrainians and no one will ever be able to appropriate it. We will not give up! Glory to Ukraine.”

Yaremchuk was one of the first national team players to share support for Ukraine online along with the Ukraine women’s national team.

The Benfica CF has shared a https://t.co/rL1y29wiYl video on his IG story pic.twitter.com/s8xSI8WZmg

FIFA and UEFA are on high alert with Russia’s aggression toward Ukraine and are considering moving the 2022 Champions League final out of St. Petersburg.

The night didn’t start smoothly for Benfica as the home side conceded to Ajax 18 minutes into the game. Dušan Tadić opened the scoring with a beautifully placed shot into the corner of the net.

Ajax would only lead for seven minutes before the Champions League top goal scorer, Sébastien Haller, poked in a goal. Too bad it was into his own net.

Sébastien Haller with ANOTHER goal... but at the wrong end! pic.twitter.com/WYrGNfGew0

Haller chose not to score a hat trick of own goals and made up for his error four minutes later by being in the right place at the right time to score Ajax’s second of the game.

Sébastien Haller with ANOTHER goal... but this time at the right end! pic.twitter.com/s0fkXdtK0c

Haller nearly had another goal in the 44th minute when an Ajax shot hit off the post and he had the entire goal open in front of him. The ball had too much steam on it, and he was unable to direct it into goal.

The second half was back and forth, with both sides creating chances. Yaremchuk’s equalizer in the 72nd minute sets up a delicious second leg in Amsterdam on March 15. With no more away goals, Benfica doesn’t have to worry about conceding two goals at home.