Ivan Anich November 24, 2015
Lionel Messi explains his mentality when he deals the with the pressures and attention of being arguably the greatest of all time.

Lionel Messi is one of the most soft-spoken players in the world. If he wasn’t constantly one of the two best — if instead he was a middling player taking the field for Stoke City every weekend, then there is every reason to believe that only hardcore fans would know who he is. It is incredibly ironic, then, that he has risen to fame at the dawn of the age of social media, at a time when everyone is making a name for themselves through their personalities. Likes and clicks matter more than news and facts, and Messi has risen above it all. The irony of Messi’s success is not lost on him.

In an interview with Guillem Balague for Yahoo Sports, Messi was asked about what it is like to be a star in the age of social media.

Balague asked, “The world of football sometimes seems like something from another planet. Artificial debates are instigated, lies are told as if they were the truth, and great importance is given to things that matter very little. Do you sometimes feel like someone from another world, a boy in a world full of madmen?”

To which Messi responded, “Yes, unfortunately we live in a society that lives at 1000 kms an hour, and in a sport as popular as football that grows and grows and becomes the escape valve for the problems of many people.” 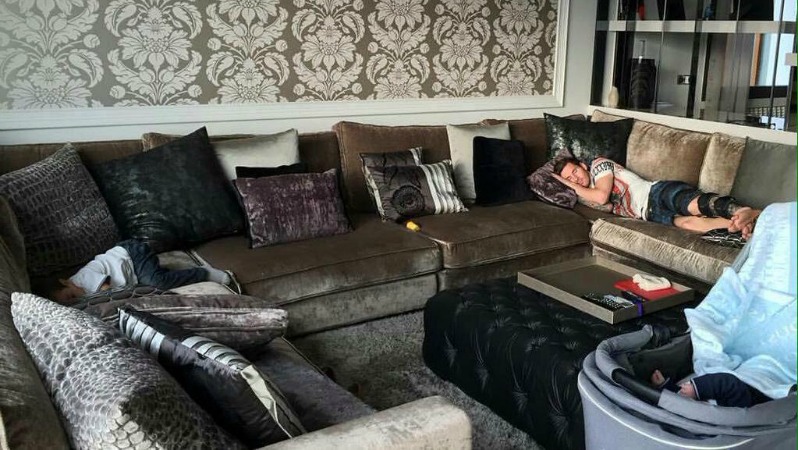 Nap time at the Messi household. Thiago is on the couch towards the left, Lionel towards the right. Mateo is in the crib. Photo: @KawdaBoy | Twitter

Messi knows that he is playing in front of a massive audience, but he doesn’t let that affect him. In fact, playing simply because he likes to play, and because it is his job to do so, is the one thing Messi mentions that he wants his sons Thiago and Mateo to understand about him.

“Who are you trying to impress when you go out onto the pitch,” Balague asked at one point in the interview. “The fans, your father, your sons, your wife? Who do you need to tell you that you did well?

“I don’t need to impress anyone because that isn’t why I play,” Messi said. “I play because I like it and because it is my profession even though to tell you the truth, I would like my sons to understand what I do."

Messi wants his sons to understand what he thinks it meas to be a professional footballer. One who doesn’t crave the spotlight, or the approval of other people.

Messi hardly even wants to hear about himself. When asked if he would read even a small part of a rhetorical book of Messi he responded unequivocally with, “Quite genuinely, no. As I said earlier I prefer to live for the moment and not look either backwards or to the future.”