Jonathan Klinsmann, the 20-year-old son of former USMNT coach Jurgen Klinsmann, made his Hertha Berlin debut, starting for the German side against Ostersunds FK of Sweden in the Europa League on Thursday. The Jonathan Klinsmann debut was highlighted by a save of a late penalty kick to preserve a 1-1 draw for Hertha.

Hertha had no chance to finish in the top two in Group J and thus fielded a handful of young players against group-leading Ostersunds, which had clinched a spot in the Round of 32 but still had first place to play for. First-team keeper Rune Jarstein has been rested for Europa League matches this season while backup Thomas Kraft was out with a cold, setting the stage for the Jonathan Klinsmann debut.

Klinsmann is a lanky 6-4 goalkeeper who signed with Hertha Berlin over the summer. Born in California to his German father and American mother, Klinsmann has represented the U.S. at the youth level, competing for both the U18 and U20 sides. Prior to moving to Berlin, he played for California in the college ranks.

Against Ostersunds, Klinsmann had a first-half shutout but allowed a goal to Sotiris Papagiannopoulos at his near post in the second half. He finished with five saves in a 1-1 draw. 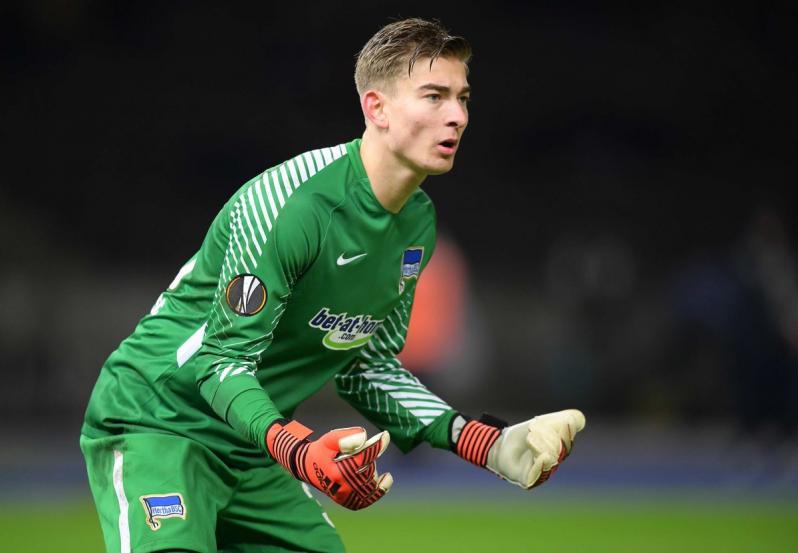 While Jurgen Klinsmann became a star as a World Cup-winning striker, Jonathan has taken up the gloves to keep goals out. While Thursday’s debut may be the start of a long career in the back, Jonathan still has the ability to bang them in.

Jonathan Klinsmann wasn’t the only young player with a famous father to start for Hertha on Thursday. Pal Dardai, whose father of the same name played for Hertha from 1997-2011, started up front for the Bundesliga club. Plus, fellow 20-year-old American Keaton Parks signed a new contract with Benfica on Thursday.