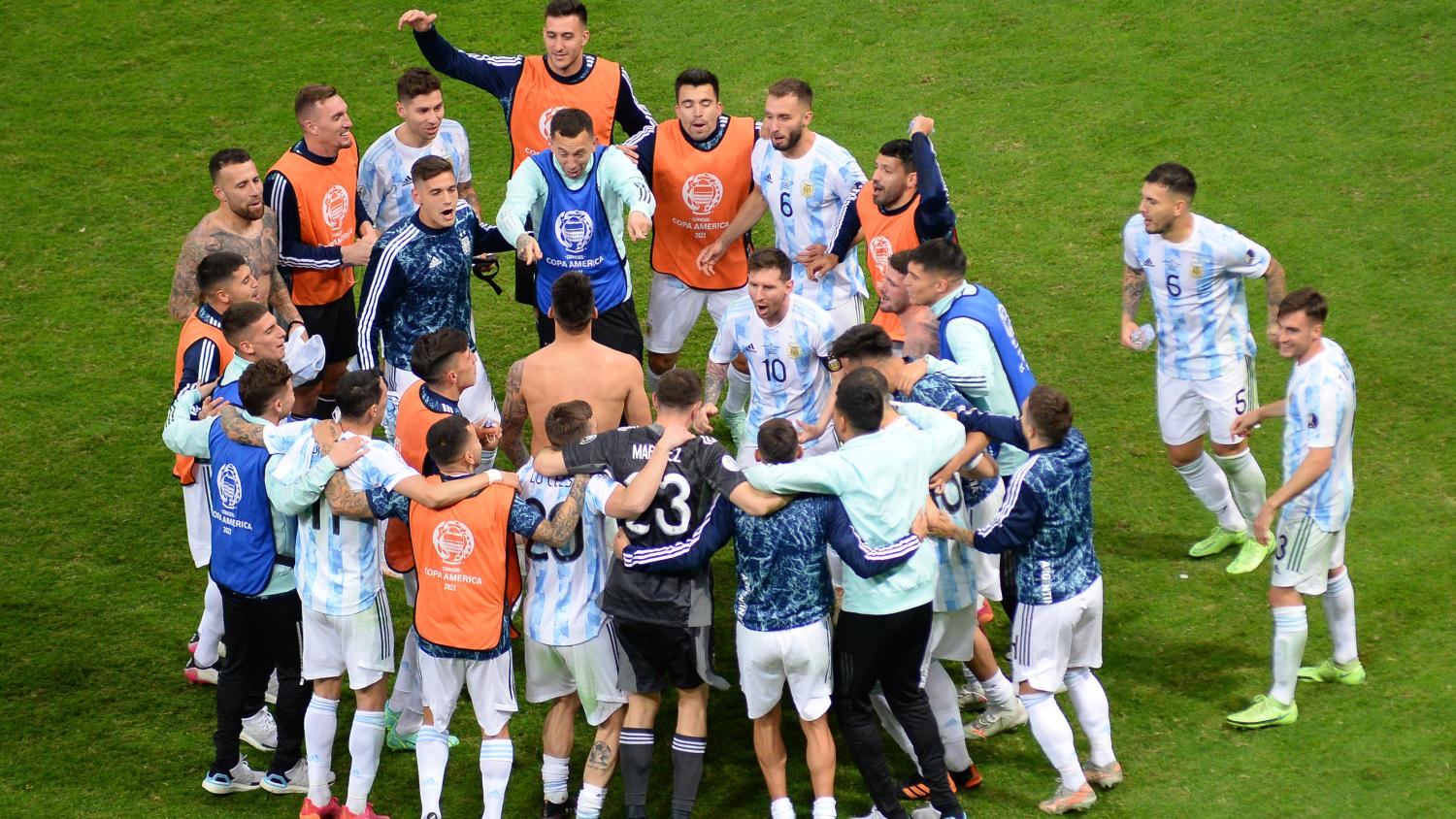 Argentina defeated Colombia in a penalty shootout to advance to the final vs. Brazil.
Getty Images

When Lionel Messi announced his international retirement after missing in the penalty shootout defeat to Chile at the 2016 Copa América Final, he disappeared into the New Jersey night with the crushing final words: “For me, the national team is over. I’ve done all I can. It hurts not to be a champion. It’s been four finals, I tried. It was the thing I wanted the most, but I couldn’t get it, so I think it’s over.”

What drew him back was the draw of another World Cup along with tempered expectations. Messi wanted more direction and Argentina has since found that, and the 34-year-old is now excelling both on and off the pitch as the veteran captain of Lionel Scaloni’s new-look squad.

The expectations have slowly grown again. A third-place finish at the 2019 Copa set the standard, and La Albiceleste remain undefeated after six matches in 2022 World Cup qualifying.

But it was Brazil that won that 2019 Copa. It’s Brazil that leads CONMEBOL World Cup qualifying with six wins out of six, and it was the Seleção that awaited the winner of Tuesday’s semifinal between Argentina and Colombia in Brasília.

Messi entered the match as the tournament’s leading scorer and provider with four of each, and he somehow managed to perform even better tonight.

It began in the fourth minute with a dribble that eliminated three Colombia defenders before finding Lautaro Martínez for a header that drifted narrowly wide.

Messi has an amazing dribble which creates a good chance for Lautaro pic.twitter.com/8xIvGZvo06

Three minutes later, El Toro opened the scoring off a feed from Messi. It was Giovani Lo Celso that played the initial ball through to Messi, and the overhead replay will show you that it could’ve located the God Particle.

In the 34th minute, more Messi.

But the moment Argentina fell asleep in the 61st, they were punished. Edwin Cardona released Luis Díaz with a ball through the channel, and Díaz produced a moment of magic to body the defender and flip the ball over the outrushing Emi Martínez.

Just like that you began to see why maybe it’s just not meant to be for Messi and Argentina. No matter what he does, Fortuna eventually turns her back. Argentina's lead was gone, and then there was the stark reality that if it remained level after 90 minutes, the match would go straight to a shootout. We all know what happens there.

Colombia played for that event, and Argentina created chance after chance but saw the ball repelled by bodies on the goal-line, the post and David Ospina.

Messi was this close to putting Argentina back in front pic.twitter.com/MM1nUrWFEE

Juan Cuadrado converted first for Colombia, and up stepped Messi. The cosmos stood still. He aimed for the corner.

We then started the Emi Martínez Show. Argentina's goalkeeper could be seen chirping at Davinson Sánchez for an extended period of time before saving his penalty and celebrating with a hip thrust.

The pressure shifted to Lautaro Martínez, but he converted to give Argentina the 3-2 lead heading into the fifth round. For the third time, Martínez repelled Colombia to send Argentina through.

That felt cathartic for a team that still bears the scars of its past, but the celebrations won’t last long. Up next is the undisputed champion of South America at the Maracanã. Messi, for a fifth time, reaches the doorstep.

This is what it means to Argentina pic.twitter.com/YYBHnm7tW4