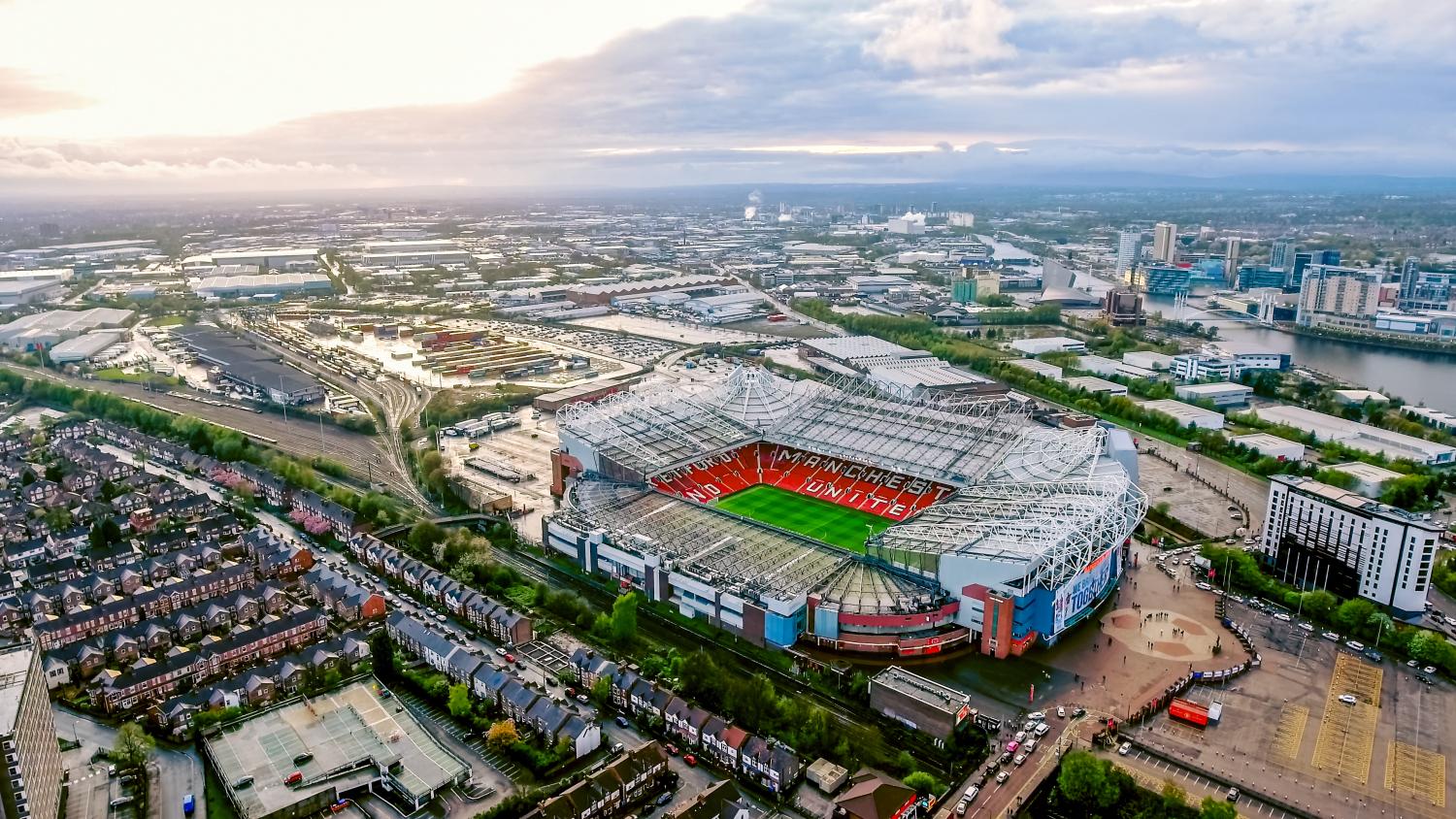 From top to bottom, these are the largest PL grounds.
Richard Heathcote | Getty Images

The Premier League kicks off this weekend as Crystal Palace hosts Arsenal at Selhurst Park, a modest yet perfect example of what soccer stadiums should and can be. With so many teams, and especially the giants, boasting opulent cathedrals of sport, it's only necessary to determine which are the biggest for the 2022-23 season.

Comfortably the smallest stadium on this list, Bournemouth’s Vitality Stadium, also known as Dean Court, serves as a stark reminder of the gulf in class between the teams in the top flight. But the fans show up and rarely do the Cherries play in front of less-than-capacity crowds. Even in the Championship last year the club averaged 9,634 fans per match.

The newest stadium on this list is quite an addition. Brentford, one of the smaller Premier League clubs based in London, opened the Brentford Community Stadium in 2020. Last year it saw its highest attendance figures, with just over 16,000 fans on average. In addition, four UEFA Women’s European Championship matches were played at the ground, with Germany playing there on three occasions.

Old, small and currently under renovation, Craven Cottage is dripping with character. With seats close to the pitch, a charming combination of old and new bits — complete with an actual cottage in the corner of the stadium — what’s not to love?

Selhurst Park, opened in 1924, is the home of Crystal Palace. ❤️

One of the purest grounds in all of soccer, Selhurst Park is uniquely special. As commercial interests quickly have taken over much of the sport, Selhurst Park remains an indomitable haven for what soccer used to be. Fans are the focal point of everything and show their appreciation, as 24,282 people on average make their way through the gates on matchdays.

Following the club’s 23-year hiatus, Forest is back in the Premier League and have a well-sized stadium for hosting games. However, attendance has been less than ideal during the club's time in the lower divisions. Even last year Forest only had an average of 27,167 fans in attendance. This season, we may see that number climb back up closer to capacity, especially for the first home match against West Ham.

Wolves is entering its fifth consecutive season in England’s top flight and the Molineux is ready to play host. Fairly standard among English soccer venues, the Molineux was among the most modern in England when it was renovated in the 1990s. Sadly that's not the case anymore as it has certainly become less exciting over time.

11 years ago today, we played our first game at the Amex ⚪️ #BHAFC pic.twitter.com/D7Qkm3iVBh

Quite the mouthful, Brighton’s stadium is also known as Falmer Stadium but is more commonly referred to as The Amex. The Seagulls' home field boasts a healthy turnout as 30,943 turned up on average last season. The stadium also played host to three games in the UEFA Women’s European Championship this summer, including two of England’s matches.

It's impossible to talk about Leicester without bringing up its 2015-16 Premier League winning season. An average attendance of over 32,000 that year shows just how much it all meant to the fans. Since then attendance has never dropped below 31,500, a truly special ground to play in. The stadium has played host to international matches, European competitions, and most recently, the FA Community Shield between Manchester City and Liverpool due to Wembley hosting the Women's Euro final the following day.

Hearing “Oh When the Saints Go Marching In” while at a Southampton match can be described as a religious experience. St Mary’s is a tight, intimate stadium with a special fan base. While attendance has dropped in recent years, mainly due to the pandemic, Southampton has continued to survive despite a host of talented players leaving for bigger clubs. The stadium itself has hosted several international games, including some group stage matches in this summer’s Euros.

The collective “GO ON!” of a crowd before a massive goal goes in is one of the greatest sounds in the world.

This video from Elland Road on Sunday is sublime.

Jesse Marsch and his American revolution have Elland Road to call home. The club begins its third consecutive season in the Premier League after avoiding relegation by just three points last season. Fairly average attendance, a fairly average capacity and yet the atmosphere is fully there. The combination of shallow sloped stands and steep upper decks in the East Stand gives Elland Road both a League One and Premiership feel, depending on where you are in the ground.

My Obstructed View of Goodison Park from Los Angeles (a thread):
When I first became an Evertonian, one of the things that I was drawn to was the fans at Goodison. The noise I felt through the TV. The rumbling of the crowd. The push they gave the players. The support. In love. pic.twitter.com/CPEOkNJJBM

Finally into the top half of the list and next up is the blue side of Liverpool. Goodison Park is a stark juxtaposition to its local counterpart. Metal beams obstruct sight lines from some parts of the stands, but that’s just the quirks of the place. The Merseyside derby should be on every soccer fan's bucket list but don’t overlook seeing it at Goodison. Fantastic attendance and an electric atmosphere make for a truly unique fan experience.

The oldest venue in the Premier League, Stamford Bridge has seen some great times in recent years. Through two Champions League triumphs and five Premier League titles, among many other accomplishments, The Bridge has been there through it all. The stadium’s capacity is barely above average in the league, but before the pandemic, Chelsea recorded an average attendance of over 99% for seven consecutive seasons, a truly remarkable feat.

Birmingham’s lone Premier League club boasts a rich history and is home to one of the country’s most famous stadiums. Villa Park is a classic ground with a beautiful exterior, especially on the Holte End. Unfortunately, the club has struggled with attendance recently, with the 2007-08 season the last time attendance was over 40,000 per match.

Who knew an apostrophe could be so confusing?

There has been much debate regarding the name of the stadium, as many, including the BBC, argue it should be St. James’s with the second “s” pronounced while the club insists that there is no second “s” and it is simply pronounced “St. James.” While we may never know for sure, what is certain is that St. James’ Park welcomes some of the most loyal fans in the nation, as attendance numbers regularly are above 51,000 per match.

Home to one of the most incredible sights and sounds in the entire sporting world, Anfield truly holds a special place among elite sporting venues. As the players walk out of the tunnel and onto the pitch, the entire stadium sings “You’ll Never Walk Alone” in harmony. Recent upgrades to the stadium have brought the capacity to what it is today, allowing the club to have over 1,000,000 fans in attendance every season, barring the two Covid affected campaigns from 2020 to 2021.

The most dominant side in the Premier League is often mocked online for having no fans and no history. While the second is a bit harder to refute, the first is a flat-out lie. From 2015-2019, the Citizens averaged over 54,000 fans and during games, fans make their presence known. A fantastic stadium and great atmosphere, combined with excellence on the pitch, makes for a must-watch show in the blue half of Manchester.

Built for the 2016 Summer Olympics in London, the former athletics stadium was repurposed following the tournament and welcomed West Ham, who left behind their beloved Boleyn Ground in the fall of that year. There was much controversy surrounding its use and much was said about it not being a soccer-specific stadium. The pitch is far from the fans, the stands are extremely shallow and many fans feel like they are miles away from the action. The club has gained a state-of-the-art stadium in its move, but it seems to have lost its soul in the process.

Another incredible stadium that doesn’t have quite the same vibe as the ground that preceded it, Arsenal moved to the Emirates Stadium in 2006, leaving behind Highbury to be demolished. The Emirates is a fantastic ground with great angles, modern amenities and one of the highest capacities in the league. In addition, Gooners still turn out in hoards, with an average of 59,811 fans per match last season. The Emirates has not seen Arsenal finish as Premier League champions yet, but with a young and immensely talented squad, Mikel Arteta’s men could be bringing titles back to North London soon.

A prime example of “anything you can do I can do better” from Spurs as they replaced long-time home White Hart Lane with the completely modern Tottenham Hotspur Stadium. It features massive screens in all four corners, great sight lines from anywhere and even a retractable American football field to accommodate NFL games in London. By all accounts, the fan experience is incredible, and Spurs certainly have built one of the world's best sporting venues.

The Theatre Of Dreams. The famed home of Beckham, Giggs, Scholes, Rooney, Best and a laundry list of other legends. Manchester United’s home ground is truly one of the greats. You just need to go. While the club has struggled in recent years and crosstown rival Manchester City have thrived, Old Trafford has been full. Between 2006 and 2019, average attendance never dropped below 74,400, and even when the team was at its worst, the fans were there.

Most recently, Old Trafford hosted the opening match of the Women's Euros and set a record for attendance that lasted until the final at Wembley.