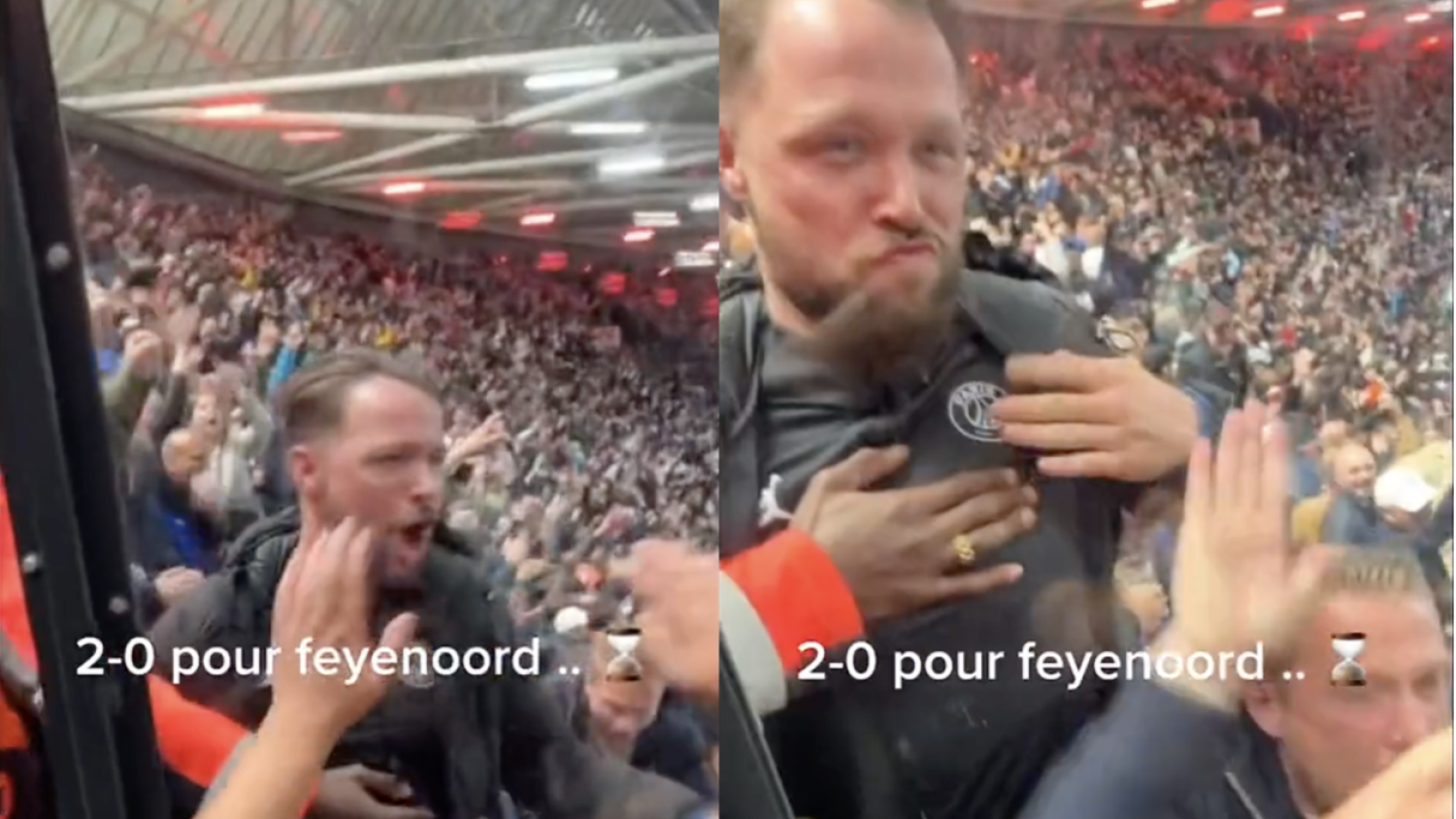 Imagine if that glass wasn’t separating the fans.
@YourLocalPSGfan | Twitter

A clip of a Feyenoord fan vs Marseille fans during Thursday’s Europa Conference League semifinal has gotten over a million views, and it’s easy to see why.

Feyenoord and Marseille played a thrilling five-goal first leg that saw the Dutch hosts take a 3-2 lead in the tie. When Feyenoord took a 2-0 lead after goals in the 18th and 20th minutes, one fan next to the Marseille away section revealed the badge of the visitors’ bitter rival.

A Feyenoord fan vs Marseille pic.twitter.com/9JzxaI4qF2

This is the beautiful game right here. Nothing like a man likely in his mid 30’s pounding a glass wall in front of an army of middle fingers while flicking his tongue and pointing at a club crest that isn’t even his.

Feyenoord and Marseille don’t have any rivalry to speak of, but the energy was still electric in Rotterdam.

Safe to say both Feyenoord and Marseille fans were enjoying themselves last night...

Both clubs have been crowned European champions in the past, but they have only met twice in the 1999 Champions League group stage. With no beef between the two clubs, our shithouser of the day sparked the fight with a PSG logo. Fair play.

The animosity between Le Classique rivals runs deep. Marseille fans despise PSG so much that when Bayern defeated PSG in the 2020 Champions League Final the fans took to the streets to celebrate their enemy’s loss.

Marseille fans taking to the streets to celebrate PSG losing in the Champions League Final is the sort of pettiness we can all get behind. pic.twitter.com/mL2yoaMF19

I can’t imagine the initial reaction those Marseille fans at Thursday’s game had when a random Feyenoord fan whipped out a PSG shirt. It’s too bad there isn’t a video of the Feyenoord fan after Marseille tied the game at 2-2 in the 40th minute.

The second leg will be played on Thursday, May 5, in Marseille. It would be poetic if one of the home fans taunted visiting Feyenoord fans with an Ajax kit.