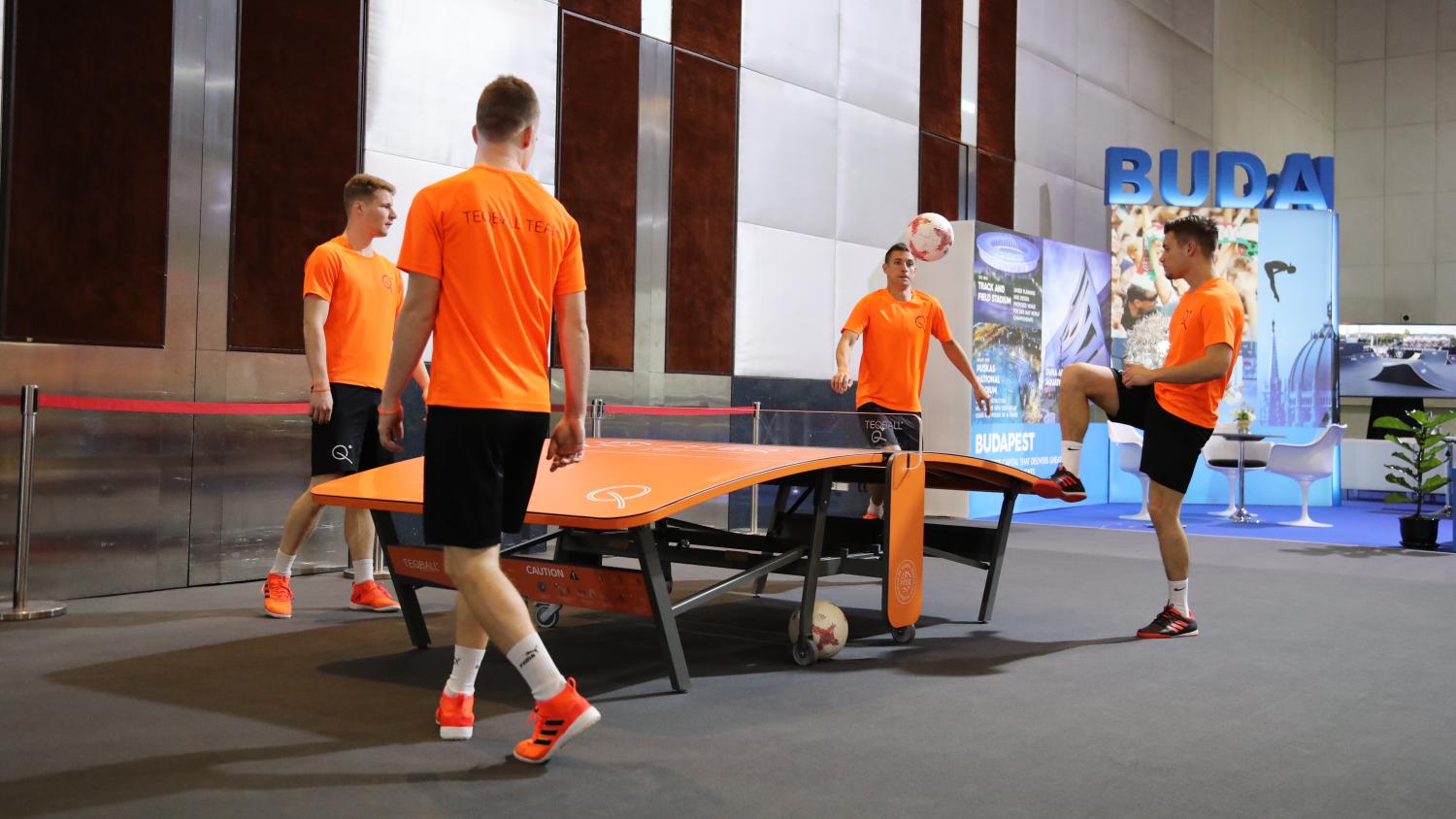 The game has changed dramatically since the days of Puskás.
Getty Images

MANCHESTER, England - A training exercise from the golden era of Hungarian football is enjoying a remarkable revival in popularity with Europe's top clubs and has even become a fast-growing sport in it own right.

When Ferenc Puskás and Hungary's 'Golden Team' warmed up for games, such as their 7-1 hammering of England in 1954, they played 'Foot-tennis' — with pairs of players either side of a net, serving and volleying but with a leather football and their feet.

Given the success that Puskás and his teammates enjoyed, it was a drill that remained popular with Hungarian club teams at all levels well into the 1990's with some training grounds having purpose built mini-tennis courts next to the field. The techniques used in those exercises were also popular with kids, with 'Tango' played on a chalked out grid and no net in the days before cars clogged the streets of Budapest.

In 2012, two Hungarians, former professional player Gabor Borsanyi and computer scientist Viktor Huszar came up with a new version of the game played on a curved version of a table-tennis table and dubbed it Teqball. They then teamed up with businessman Gyuri Gattyan and set about popularizing the sport and selling Teq tables all over the world.

There are now 96 national federations and the sport has held three world championships whilst in football, a number of top teams, including Manchester United, Paris St Germain and Barcelona, use the tables at their training grounds. Huszar believes foot-tennis had an influence on the 'Mighty Magyars' and that Teqball is helping foster similar skills.

"It is really going back to this Hungarian root of technical skill football. Back in the 1950s, Hungary was one of, if not the best team in the world with players like Puskás," Huszar told Reuters. "If you think about players like (Laszlo) Kubala, who played in Barcelona and the others of that era they were incredibly skilled players and typified that Hungarian approach to the game with great individual technique.”

The key lesson the developers learnt was from the attempts made by kids in communist-era housing estates to play football on the concrete table-tennis tables that were often placed in recreation areas.

"There was only one huge issue. The ball never bounced out of the concrete table and also returning the ball was difficult because it always got stuck in the table itself," said Huszar.

So Teq tables feature a curve which ensures the ball maintains speed and bounce, keeping the game fast and rewarding accurate returns. The first prototypes were made of wood but the modern version features synthetic material.

The International Federation of Teqball (FITEQ) became a recognized governing body in record time and claims to be the fastest growing sport in the world, helped by the popularity of social media videos from well-known players, particularly on Instagram where the sport's main account has over 625,000 followers.

The sport is also proving popular in Asia where traditional sports such as Sepak Takraw, a kind of kick volleyball, provide a ready made base of players with the required skills and is part of the Asian Beach Games. Given the rapid global growth, it is not surprising that, although no plan is in place, Huszar dreams of one day seeing Teqball in the Olympic Games.

"I hope that a consequence of what we do will be that one day the IOC will say that Teqball should be an Olympic sport because breakdancing is now an Olympic sport, sport climbing is in the Olympic program, so the IOC is now thinking that youth driven sports should be added to the program," he said. "Fingers crossed, I hope we can get there, it would be amazing."

#TEQuote from the one and only @10Ronaldinho
️⚽ - Would you like to see the win gold at the Olympics?
• #Teqball #WorldIsCurved #Lifestyle #Ronaldinho #GOAT #Legend #Olympics pic.twitter.com/BeWAZzklI6