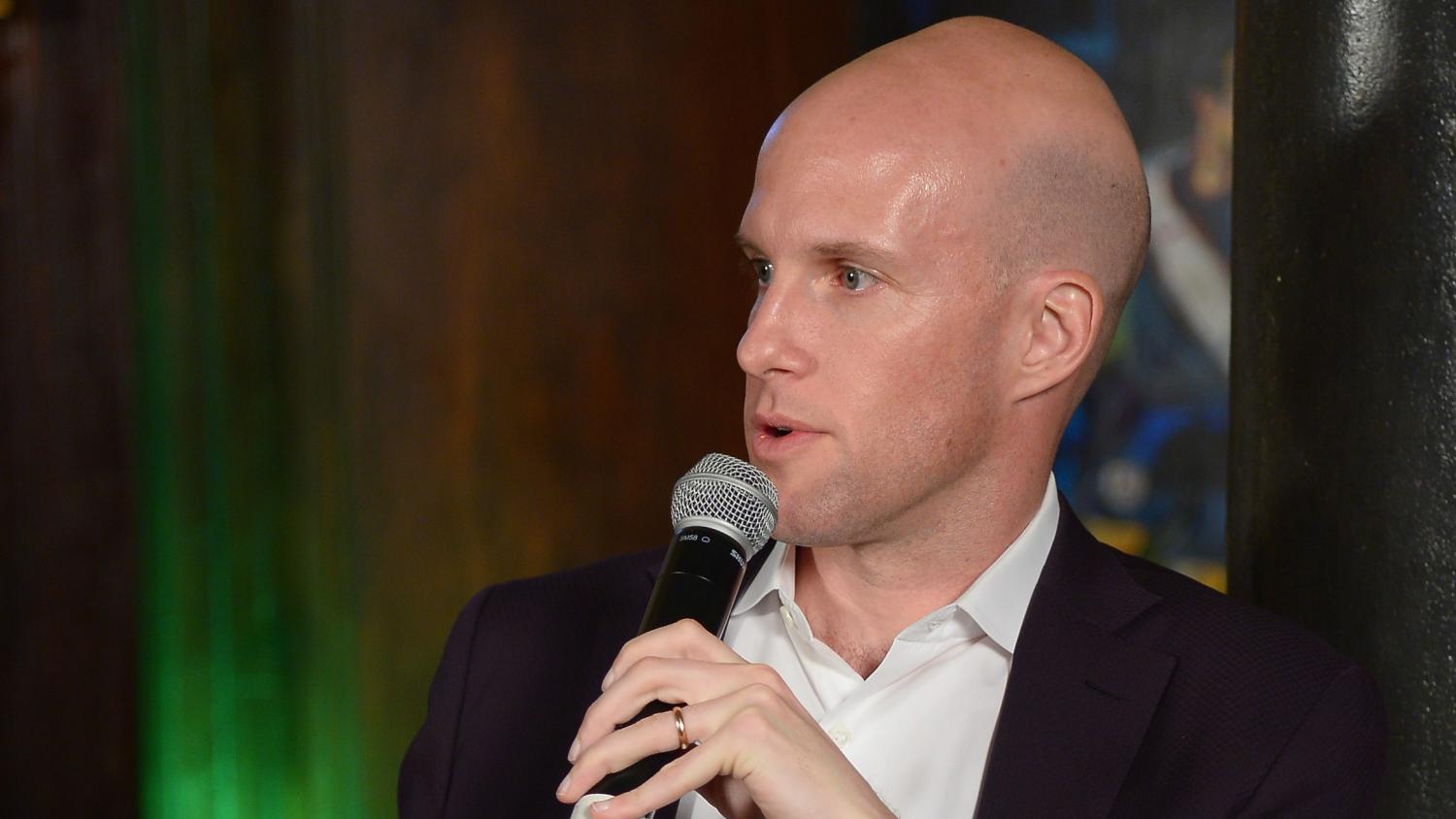 You would be hard pressed to find a sportswriter in America who didn’t grow up reading Sports Illustrated. The iconic magazine brought the sports we love to life each week with superb writing and incredible photography.

Sadly, Sports Illustrated is being destroyed by The Maven, the company that now owns the publication.

Grant Wahl, the journalist and author who I’ve often described as the U.S. soccer laureate, was fired from SI without severance by Maven on Good Friday. To make matters worse, the company then tried to smear Wahl’s name in a company-wide memo littered with false accusations, letting us know just how it feels about soccer in the process.

Maven just fired me from Sports Illustrated. No severance. Nothing.

Sports are having a tough time dealing with the novel coronavirus pandemic. With sports all but dead as humanity stays at home to prevent the spread of COVID-19, leagues, players, staff and media companies have been forced to face difficult decisions. Because few companies actually save enough money in case of emergencies, there have been layoffs and forced pay cuts around the sports world, even at the biggest clubs in soccer.

Sports Illustrated was no different.

Maven announced earlier this week it was laying off six percent of Sports Illustrated’s staff. Many others were forced to take significant pay cuts, including Wahl, who had worked at the magazine for 23 years.

(Before it all but disappeared, Deadspin produced a terrific investigative piece on how Maven was destroying Sports Illustrated by trying to turn it into a shitty content mill, an article worth reading in light of this week’s events.)

Wahl expressed his feelings on the layoffs on his Instagram stories following the moves, saying he was glad to still have his job but disheartened by his employer’s actions. In the posts, which were later deleted, he said he took a 30 percent pay reduction, but Maven wanted to make the pay cut permanent, Wahl accusing the publisher of taking advantage of the pandemic to give someone a salary reduction. 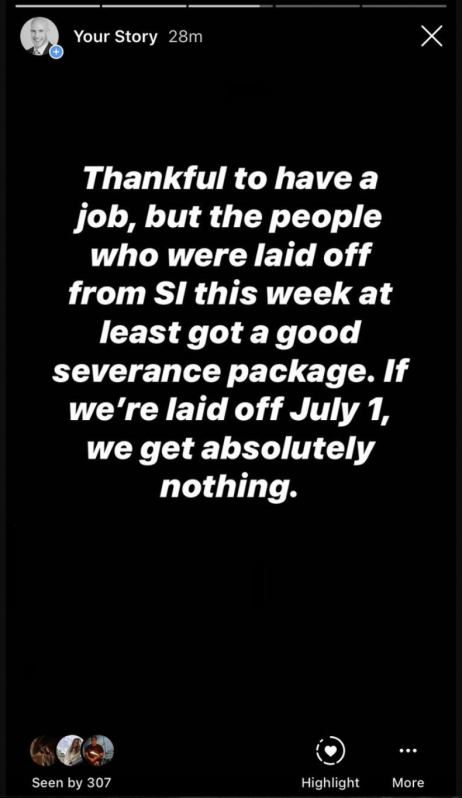 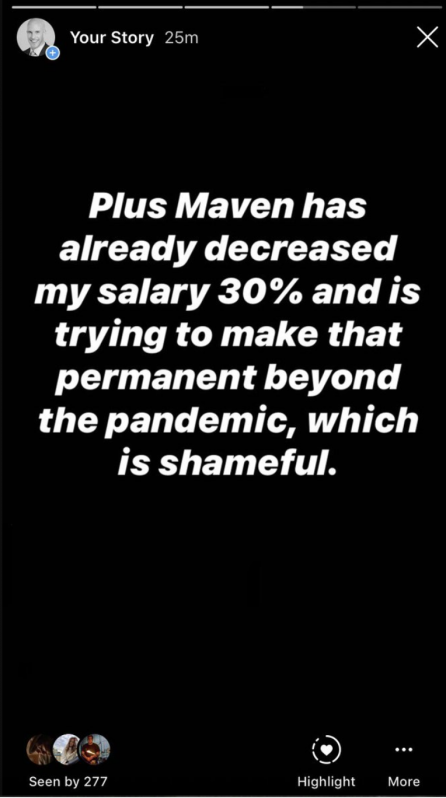 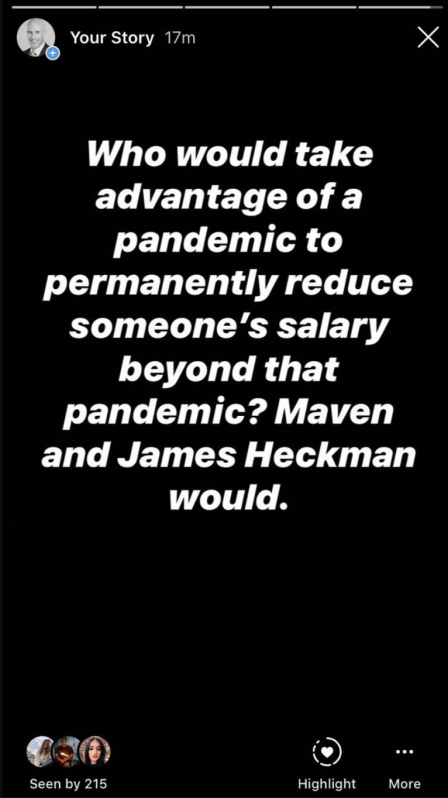 Perhaps not appreciative of being called out on social media, Maven fired Wahl on Friday. An internal memo obtained by Ian Thomas from Maven CEO James Heckman claimed Wahl had a me-first attitude.

“As part of the multi-faceted cost-containment strategy we unveiled last week in the face of coronavirus-driven declines in advertising revenue, a $4 million reduction in compensation was enacted across senior leaders and high-salary members of our team. This move helped limit layoffs to 9 percent of our workforce and we believe saved at least 30 jobs. Every senior staff member volunteered to put their personal budgeted future at risk, to save jobs and ensure stable salaries for those making less. Everyone, that is, but one person.
“This person made more than $350,000 last year to infrequently write stories that generated little meaningful viewership or revenue. Yet he trumpeted that he thought it shameful to be asked to participate in helping his fellow workers. To complain about a personal pay reduction when 31 others had just lost their jobs is incomprehensible in light of the sacrifices others made to help limit layoffs and maintain livable salaries for our staff. Such a me-first attitude is not part of the tradition and culture Maven is committed to maintaining.”

First of all, claiming that layoffs save jobs is a really shitty way to promote a coworker losing his or her livelihood. Second, Maven has already done irrevocable damage to Sports Illustrated’s “tradition and culture.” Third, trying to claim Wahl wrote infrequently with little meaningful viewership is a big “fuck you” to soccer fans like myself who regularly devoured his excellent content he produced frequently.

Heckman went on to say Wahl’s salary would be used to provide additional severance to the other employees who were laid off, added insult to Wahl, who was told he wouldn’t receive any severance.

It should be noted, $350,000 is a big salary, especially in sports journalism, but if any soccer writer deserves that much money in America, it’s Wahl. (I’m all for writers, especially soccer writers, making as much money as possible, because most of us start out making miniscule, NWSL-esque salaries.) Plus, Wahl said his base salary was actually far below the $350K Heckman described, saying he only made more last year because of a bonus for quality work, which would seem to discount Heckman’s statement about producing little meaningful viewership.

1) I told Maven I was fine taking a 30% pay cut during the pandemic. But it was shameful to try to push through a permanent 30% cut beyond the pandemic.
2) My base salary was far below that, but I got a bonus because my bosses said my work was very good.
3) I write frequently. https://t.co/Q5BvV2CTeg

Wahl will probably be fine in the future; who wouldn’t want to hire him? (Come join The18!) Meanwhile his wife, Celine Grounder, is becoming a household name as an infectious disease doctor appearing on major networks across the country to talk about COVID-19. But this is still a sad week for the soccer community.

Not long after the firing, the Sports Illustrated Union put out a statement, saying it was “appalled” by the move.

Our statement on today’s events and those of the last few months: pic.twitter.com/dDV3LAmsqX

Countless soccer writers and fans also voiced their support for Wahl on Twitter on Friday and Saturday, taking target at Heckman and Maven for being complete and utter assholes during a pandemic.

If you're wondering about the outpouring of support for @GrantWahl, it's because he has always taken time to help young journalists and promote others' work, while also growing the sport in this country with his coverage. I have no doubt he'll be working again soon.

Something I really appreciate about @GrantWahl is how he covers the USWNT and women athletes, which is to say, exactly like he covers men.

So of course Maven's CEO is openly attacking his work, saying it "generates little meaningful viewership or revenue."

I'm going to go out on a limb and guess @GrantWahl will be generating "meaningful viewership" long after TheMaven (current stock price 48 cents) ceases to exist.

.@GrantWahl did more for my career than you’ll ever know. A friend, colleague, mentor & partner in crime. If it seemed as if we never disagreed on  via the pod or pftv, it’s cause that was the case. I’ll miss my buddy & despite social distancing, I’m virtually hugging him rn. https://t.co/QayzwZCAnH

Lucky enough to call @GrantWahl a colleague for the better part of two decades. Watched him transition from an elite college basketball writer to the preeminent voice in soccer. Tireless worker and an unbelievable talent.

A shitty, shitty move by @JamesCHeckman to email the remaining SI staff after terminating @GrantWahl — revealing his salary, shitting on his work (which was excellent), and blaming him for Maven’s poor business moves, trying to pit an SI lifer against the rest of the team. pic.twitter.com/vqYPhxEf4j

Grant Wahl will bounce back. He’s talented and hardworking enough to find another job more easily than anyone else in this situation.

But that doesn’t take away the anger many soccer fans in America are feeling today at a clueless company firing a beloved writer and throwing his name in the mud with nonsense in the process.

Sports Illustrated, sadly, is no longer worth a paying subscription, Maven having utterly gutted the once-unmissable magazine.

On Saturday, Wahl was able to collect his thoughts and post some retrospective on his 23-year Sports Illustrated career.

“Sports Illustrated is the only full-time job I have ever hand. I got a subscription from my parents as a Christmas gift at age 10, would read it cover to cover each week and told high school friends that my goal was to write for SI someday. Frank Deford was my hero. I started as an entry-level-fact-checker in 1996, became a full-time SI writer a year later and spent the next 23 years on the most rollicking adventure anyone could have asked for. I will always be grateful for the opportunity Bambi Wulf gave me. Sports Illustrated was the greatest sports publication in history, and the people I covered and the writers I met (including Frank Deford) exceeded all my expectations. Somehow the reality was even better than my dream.
“I covered college basketball and soccer from the start, but soccer became my sport. I loved telling the story of American soccer’s growth, men’s and women’s, and world football provided so many indelible tales in Sports Illustrated’s wheelhouse. As someone who grew up in Kansas and didn’t leave the U.S. until I was 21, I made up for it over the years thanks to SI, which took me to places I never would have imagined. My SI journey ended this week, but the writers, editors and producers, past and present, are tremendous talents whom I was honored to call colleagues. And the readers? What can you say? Your passion always kept us going, kept me going. I hope I can write and podcast for you again soon. I’m one of 16 million Americans who have lost their jobs in the last three weeks. We’ll come back strong, and we’ll beat this virus, and we’ll be in a better place not too far down the road. Thank you for everything. Vamos!”

Wherever Wahl finds his next writing job, legions of fans will follow, unlike whatever Maven does next to Sports Illustrated.