Ranking the best forwards playing at the 2022 World Cup 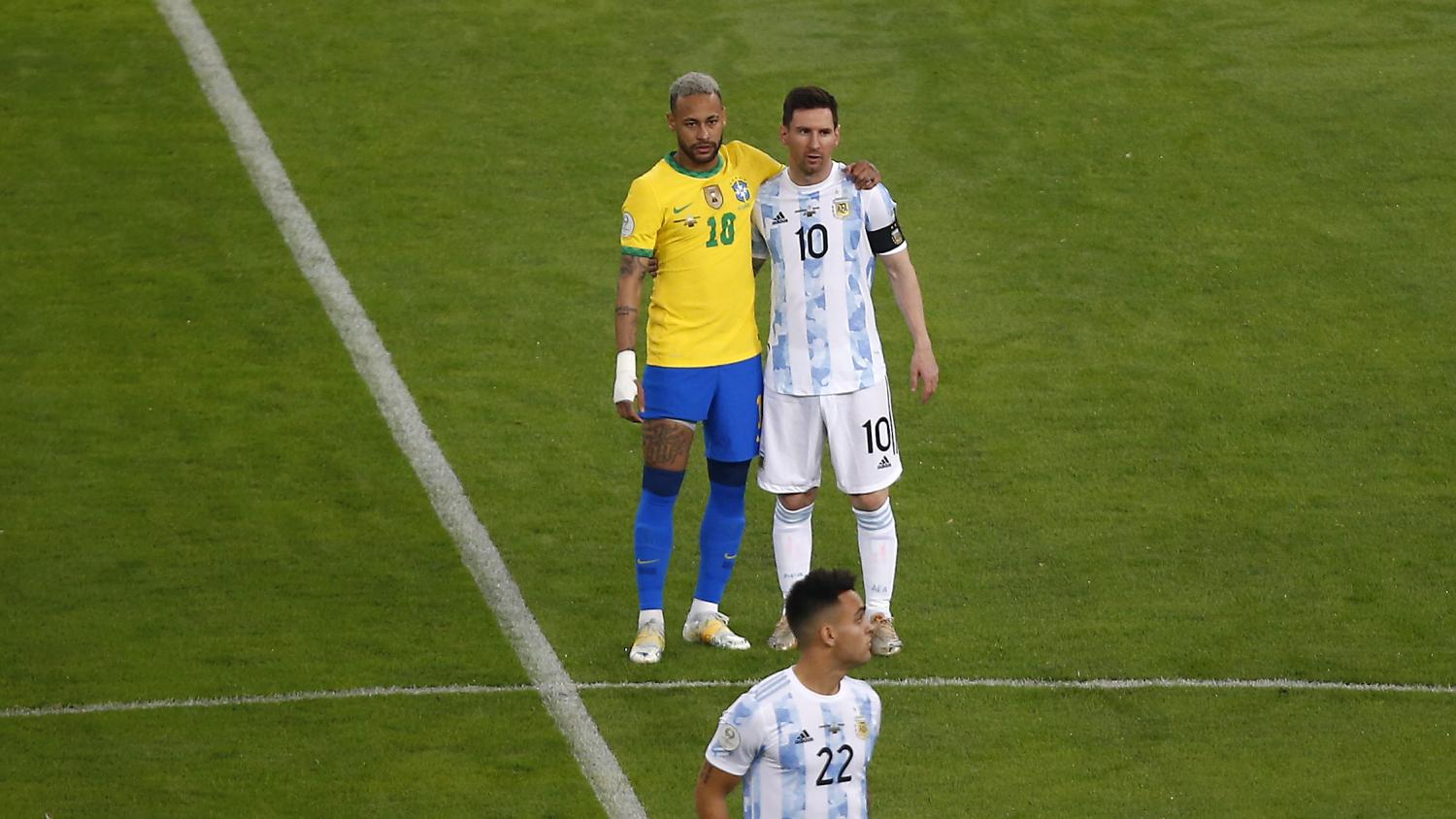 There’s no surprise as to who's number one on this list.
Getty Images

Every four years the World Cup brings together the world’s best players and Qatar 2022 will not be an exception.

On the attacking front, the exotic winter tournament brings us a combination of new talent, legendary strikers, generational wingers and a pair of GOATs.

In celebration of the World Cup being so close, we rank the forwards who are most likely to make an impact at Qatar.

The Brazilian leads his country in yet another World Cup. Although he didn't have the best season at PSG — tallying a combined 21 goal contributions in 28 games — his contributions to the Scratch du Oro in their early World Cup qualification were important.

The 30-year-old scored eight goals and provided eight assists in 10 games — a total of 1.6 contributions per game. Solid.

Neymar has always been held to a high standard since debuting for the verde e amarela, and he’s never disappointed. The winger has scored 74 goals for the national team and sits second in the all-time scorers list. Ney is only three goals behind the legendary Pelé’s 77, meaning he could very well overtake Pelé at the World Cup as the new all-time goalscorer of the pentacampeão do mundo.

After a heartbreaking injury in 2014 and an early exit against Belgium in 2018, the 2022 winter tournament will most likely be the forward’s last real chance to have a strong impact and bring the longly-awaited trophy back home.

If injuries are not present and his form is consistent going into the World Cup, Neymar will surely bring Joga Bonito to Qatar.

The USA should be scared.

Harry Kane is perhaps England’s best striker in the last decade. The 28-year-old is a three-time Premier League Golden Boot winner and was the last World Cup’s top goalscorer with six.

Although he's one of the world’s deadliest finishers, Kane does know a thing or two about creating chances for others.

The Londoner provided nine assists in the league last season and was the league’s top assister (14) in the 2020-21 season. That's a modern-day striker.

Kane’s form for the national team, though, is just as impressive. The striker is three goals (50) shy of breaking Wayne Rooney’s 53 to become England’s all-time top goalscorer.

A record bound to break in Qatar?

However, even when the record is as close as ever, after being knocked out in the World Cup semifinals in 2018 and losing the Euro 2020 final at Wembley, there’s definitely a feeling of unfinished business across the Three Lions.

Son is one of the most interesting talents on this list. It's not very often that we see Asian players make an impact at such an elite and consistent level.

The South Korean has gradually become one of the world’s best players. Like his partner in crime, Harry Kane, Son is a player who can both hit the back of the net and help teammates do the same.

The winger is coming off an amazing 2021-22 season where he was the Premier League’s Golden Boot winner, racking up 23 goals and nine assists along the way.

South Korea were amongst the first in Asia to qualify for the World Cup and will be hoping to surpass the group stage for the first time since 2010.

Plus, Sonny’s a nice guy — he had to make the list.

The Ballon d’Or winner is heading into his fifth World Cup, and it might be his best.

Over his international career, Messi has shared the pitch with generational players like Sergio Agüero, Angel Di María, Gonzalo Higuaín, Diego Milito and Carlos Tevez. However, even though the current squad lacks the depth of elite goalscorers and playmakers, their chances of winning the tournament are the highest they’ve been in 30 years.

La Scaloneta has a perfect combination of fresh, new talent and of experienced leadership — a mixture that made them Copa America champions in 2021 after 28 years.

Individually, Messi did not have the best goalscoring season. After a shocking and drastic move to PSG, Messi struggled to make the impact we’re all used to seeing.

But Messi standards are not quite the same for everyone else.

In his “worst” season, the Argentine bagged six goals and 15 assists in Ligue 1 and scored five goals in seven games in the Champions League — a combined 26 goal contributions in 34 games.

Underrated season if you ask me.

Playing for his country became his "escape" during the difficult transition at PSG. Messi has had the time of his life playing for La Albiceleste and the Qatar World Cup might become the cherry on top.

The Brazilian’s improvement over the last 18 months has been astronomical, and after the appointment of Carlo Ancelotti as Real Madrid manager, Vinícius became another beast.

The 22-year-old took the world by storm in the 2021-22 season, having a combined 42 goals and assists in 52 games and scoring in the Champions League final, sealing Los Blancos’ 14th title.

After his superb season, the skilled winger earned himself a new contract at the Bernabeú, turning him into one of the highest paid players at the club until 2027.

Not bad for a player who can’t finish.

Vinícius has gained the trust of Tite and has landed a regular role on the national team. By the looks of it, if the Brazilian follows his breakthrough season into Qatar, Vini might turn the World Cup into his oyster. And we’re here for it!

You knew he was coming, didn’t you?

The 37-year-old is as ambitious as he was 20 years ago, and he’s showing it both on and off the pitch.

The Portuguese completed a fairytale return to Manchester, coming back to Old Trafford after 13 years. Ronaldo’s return was very promising considering the team was coming off finishing second in the Premier League and had signed the likes of Jadon Sancho and Raphael Varane. Although his return sparked hope for a potential trophy-winning season, the campaign was far from becoming so. The number seven was Manchester United’s only attacking threat.

El Bicho scored 18 goals and provided three assists playing with perhaps the worst United side in the Premier League era. Plus his total of six goals in six games in the Champions League helped the Red Devils go through the group stage and avoid another embarrassment.

Presently, Ronaldo is eager to compete for trophies and playing at Old Trafford might not cut it, at least for now. Consequently, we're not sure where the striker will play in the 2022-23 season.

What we are sure about, though, is that the number seven will continue to bag goals anywhere he goes.

The World Cup will become Mr. Champions League's fifth and like Messi, this might be his last and most probable chance to take the golden trophy home.

The most promising talent on the list is already one of the world’s greatest.

After a groundbreaking 2018 World Cup where he became the youngest player to score in a final since Pelé, Mbappé was is destined for glory.

To put it into perspective, the Frenchman has become so good that although he shares the pitch with players like Neymar and Messi, he still managed to be both top assister and top goalscorer for PSG in the 2021-22 season.

After an everlasting transfer saga between signing for Real Madrid and renewing with PSG, the 23-year-old became the world’s highest paid player after re-signing until 2025. Consequently, the Frenchman, who has 132 goals, will be on pace to become and surpass the club’s all-time top scorer (Edinson Cavani, 200) before turning 26.

The heir to the throne.

Euro 2020 showed the French to be beatable and human, and after a personally disappointing and heavily criticized tournament, Mbappé is looking to bounce back and double-up on the gold to help France become the first to win back-to-back World Cups since Brazil’s 1962 team.

Will "Donatello" be the future #1?

The current most lethal and savage goal scorer on the planet.

The Pole is the definition of a number nine. The striker has completely obliterated the Bundesliga, becoming the top goalscorer in six of the last seven league seasons, putting him 53 goals away from the legendary all-time goalscorer Gerd Muller (365).

However, after basically owning every team in the league and winning the sextuple with Bayern in 2020, the striker’s historic goal tally in the Bundesliga is on hold. The Pole was keen on a move away from Germany and into Barcelona — a deal that's now happening.

If all goes well, we will see the world’s deadliest striker play against the world’s best player (and the #1 on the list) in this upcoming season’s El Clásico.

Kind of nostalgic, isn’t it?

The best player on the planet and the upcoming Ballon d’Or winner, Monsieur Benzema.

After the departure of Cristiano Ronaldo in 2018, Real Madrid's new captain turned into a different beast.

The 34-year-old had an unbelievable season with Real, winning the Spanish Supercopa, LaLiga and Champions League — all titles he was vital in obtaining.

The Frenchman was the LaLiga and Champions League top scorer, scoring in every knockout tie leading up to the final (including hat-tricks against both PSG and Manchester City).

The Galactico tallied 44 goals and 15 assists in 46 games across all competitions. Lunacy.

In 2014, after being involved in an alleged blackmail case involving former teammate Mathieu Valbuena, Benzema was basically banned from the national team and was not called up for almost six years. Consequently, the legendary Madridista missed out on World Cup glory in 2018 and was left in the shadows.

In 2020, the Frenchman was recalled by Didier Deschamps for the European Championship. Although the tournament wasn’t the best for the current world champions, Benzema helped the French win their first-ever Nations League title in 2021.

Now in 2022, the striker hopes to get his share of World Cup stardom. After coming off his best individual and collective season ever, there's reason to believe the five-time Champions League winner will top his Ballon d’Or winning year with a world championship with Les Blues.