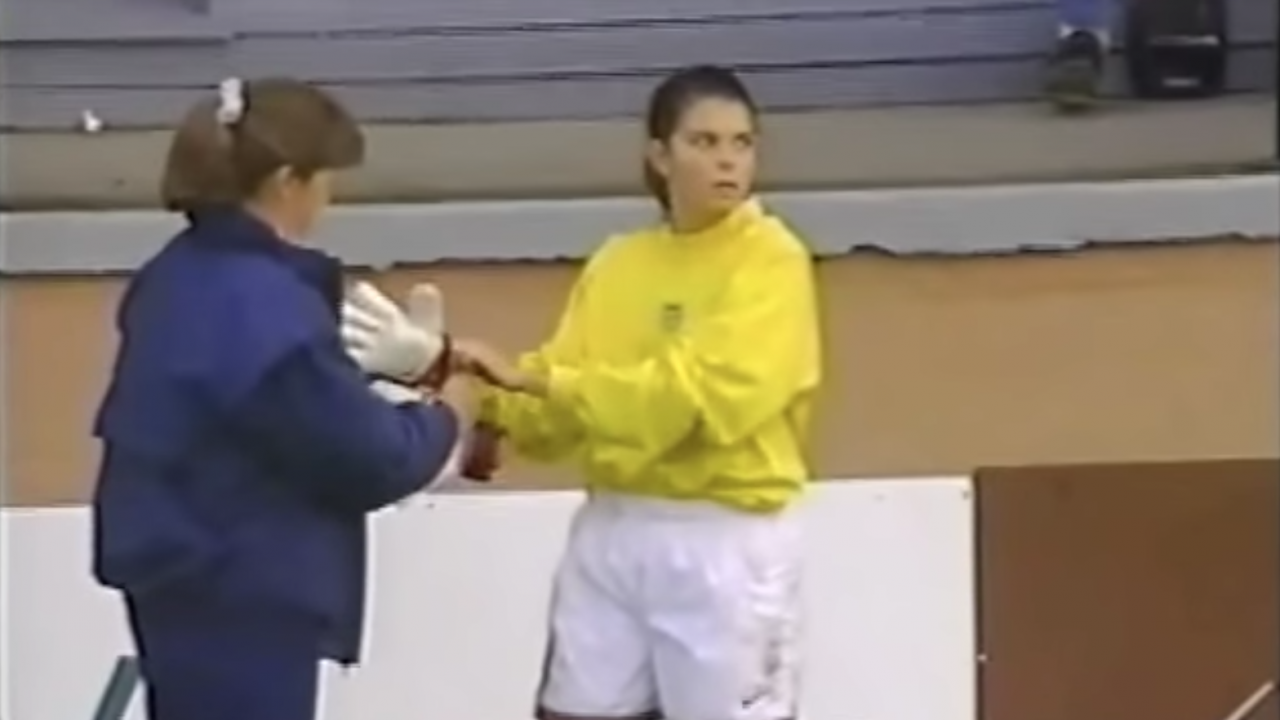 Few players in the history of the sport have impacted women’s soccer as much as Mia Hamm. The feared striker retired as the all-time leader in international goals with 158 (later passed by former teammate Abby Wambach) and still holds the record for most USWNT assists with 145, a mark that may never be equaled.

Third all time in USWNT appearances, Hamm was the face of U.S. women’s soccer for decades, having played from 1987 to 2004. She won two World Cups, two Olympic gold medals and four NCAA titles at UNC.

She was powerful in front of goal, unstoppable at times. She was creative with the ball, regularly setting up teammates. She was hard working up top, the first line of defense for her team. She was the ultimate team player.

Never was this more evident than in 1995 when disaster nearly struck the USWNT at the Women’s World Cup.

Briana Scurry was a legendary goalkeeper in her own right. Although she (and the Chinese goalkeeper) both clearly cheated during the historic penalty kick shootout in the 1999 Women’s World Cup final by jumping off their lines early, Scurry wasn’t typically one to bend the rules or make mistakes.

But in 1995, late in a World Cup group-stage match against Denmark, she made one of the most bone-headed mistakes of her career.

The 23-year-old goalkeeper had played well enough that day, keeping the Danes off the scoreboard two days after she had given up three goals in a draw with China. But in the 88th minute with the U.S. up 2-0, she stepped outside the box while launching a long punt clear.

The linesman saw Scurry hadn’t let go of the ball with her hands when she was outside of the box, and referee Mamadouba Camara showed her a straight red card.

Who would he turn to as goalkeeper for the remainder of the match?

None other than Mia Hamm, the 23-year-old striker.

Hamm was no stranger to the big stage. At 15, she became the youngest player ever to debut for the USWNT. She scored two goals at the 1991 Women’s World Cup at 19, helping the U.S. claim the FIFA’s first international trophy, which back then was known as the “1st FIFA World Championship for Women’s Football for the M&M’s Cup.” (FIFA didn’t think women were deserving of bestowing the title of “World Cup” to the winner.)

Hamm had already scored in the opening group-stage match of the 1995 tournament, briefly giving the U.S. a 3-1 lead against China it would squander. She would add another goal later in the tournament, also against China in a 2-0 win in the third-place match.

After the red card against Denmark, Hamm threw on Scurry’s giant No. 1 keeper’s shirt, tucking it into her shorts so it didn’t go down to her knees. She hurriedly put on some gloves and rushed back into goal.

Hamm’s first task in goal as the match ticked past the 90-minute mark was to defend a free kick from the edge of the area that resulted from the Scurry red card. Fortunately for her, having not had a chance to take any warm-up shots, the effort from Denmark whizzed just wide.

Despite the match being mostly decided, the referee ended up allowing more than eight minutes of stoppage time, the English-language commentator even saying “I do not know where this referee is finding all the added time from — it’s a crazy situation.”

But Hamm persevered through the final minutes, making two saves to close out the 2-0 clean sheet, which was important as a single goal would have cost the U.S. its spot at the top of Group C.

Maybe it shouldn’t be surprising that Hamm was a capable fill-in as goalkeeper. She’s clearly a supreme athlete and can do it all. Who can forget the time she threw Michael Jordan to the floor in a judo match?

After the Denmark match, the U.S. lodged an appeal of the red card. DiCicco was pissed after the match, according to this report from the LA Times, which said DiCicco blamed FIFA, as others also did, for employing inexperienced referees.

"It’s naive officiating,” DiCicco said. “Obviously, I don’t agree with the call. Maybe it’s a hand-ball. Maybe, if the goalkeeper is trying to sneak an unfair advantage, it might even be a yellow card. But I think a red card is really harsh.

“The (U.S.-China) game the other night done by the Swedish referee (Ingrid Jonsson) was outstanding. I think anybody who was here saw that she had total control of the match. Today, it was simply not as well officiated.

“I have filed a formal protest because I think it’s an incorrect call and there’s no way that an athlete should be put out of the championship for a referee’s misinterpretation.

“In the spirit of the game, it was an incorrect call. If (Scurry) came out and handled the ball because somebody was breaking in, yes. If she takes somebody down, that’s the correct call. But this was incorrect.”

Hard to argue with DiCicco there. Nonetheless, Scurry was suspended for the next match, in which Webber played in goal, a 4-1 win over Australia. Scurry returned for the knockout rounds, starting with a 4-0 shutout of Japan in the quarterfinals. However, Ann Kristin Aarønes netted past Scurry in the 10th minute of the semifinal match as eventual champion Norway knocked the Americans out with a 1-0 victory.

Hamm, Scurry and many of the other members of the 1995 team would return four years later, better than ever, to win the 1999 Women’s World Cup in front of record crowds.