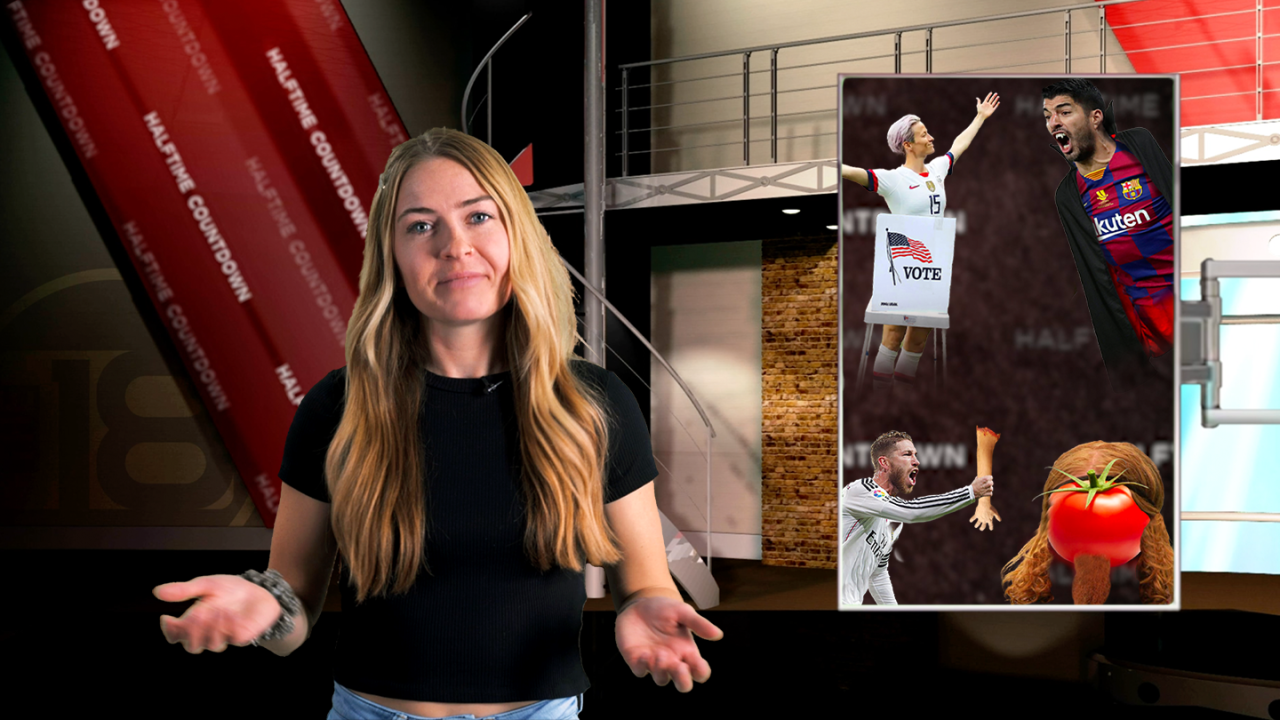 Welcome The18's Halftime Countdown of the Best Goals Ever Scored!

Breaking into this list for the first time ever, Kurt Zouma. Man, you drop kicked your cat, that’s not cool.

Okay for number 8 on our list (honestly should be number one) are Adam Johnson, Benjamin Mendy, Mason Greenwood, Robinho, and everyone else who fits this category.

We’re just going to lump all the accused and convicted rapists and assaulters into one spot here and move on, because they don’t deserve our time or attention.

Up next is Megan Rapinoe and there's a lot of different routes you could go here. You're probably one of these three people:

A. You hate politics and can't stand when she talks

B. You're a hair stylist and can't stand her hair.

Or C, you play on the Thailand national team and watched her slide by your bench at the World Cup after she scored the US's 9th goal against you.

Either way, you hate her.

At number six we have Neymar (Thiago’s going to hate us for this) But he has to be on this list. He’s known as a professional diver, everyone loves to hate him. Especially when he misses penalties. This man can’t go to the bathroom without taking a dive. He’s impossibly good but everyone hates him for his propensity for flopping and love of big parties, especially if it’s his sister’s birthday.

SET PIECES!!! Sorry, I don’t know what came over me. The dude was a good player in his time, but these days he’s just an obnoxious talking head, and don’t get me started about that attempted music career.

Sure, he was a decent player in his prime, but go ahead and watch 15 minutes of him on FOX Soccer and then get back to me.

Next up, N’Golo Kanté

All right, coming in at number four we have Sergio Ramos. Ah, Sergio, I’ve always hated this guy. He picked on Messi for over a decade and tried to rip off Mo Salah’s arm in the Champions League Final. He’s just overall one of the dirtiest players in the game. The man’s got more red cards than Hallmark on Valentine’s Day!

Oh man, Jamie Tartt. He was such a prick at the start of Ted Lasso (great show by the way). He bullied Nate, was a self centered brat, was a jerk to Keeley, and his baby shark chant is god awful. We don’t care that he had a redemption arc in Season 2 or that he isn’t real, Jamie Tartt belongs on this list.

At number two we have Luis Suarez. All right, this one’s an obvious one. You know it’s bad when you’re known, as a soccer player, for something other than soccer. And he didn’t just bite one guy, I think it was, three? That’s crazy, man. He also denied Africa a World Cup semifinal with a handball goal line clearance and he got an eight-match ban for racially abusing Patrice Evra. Man’s just full of top-tier shithousery.

Top on our list of most hated players is Dutch winger Arjen Robben. You only really need to see one image to agree on the fact that this man is an absolute piece of shit. Even if you’re not a Mexico fan, you have to hate this guy. Robben singlehandedly extended El Tri’s Round of 16 curse at the World Cup in 2014. That’s all the reason we need to make him Number One.