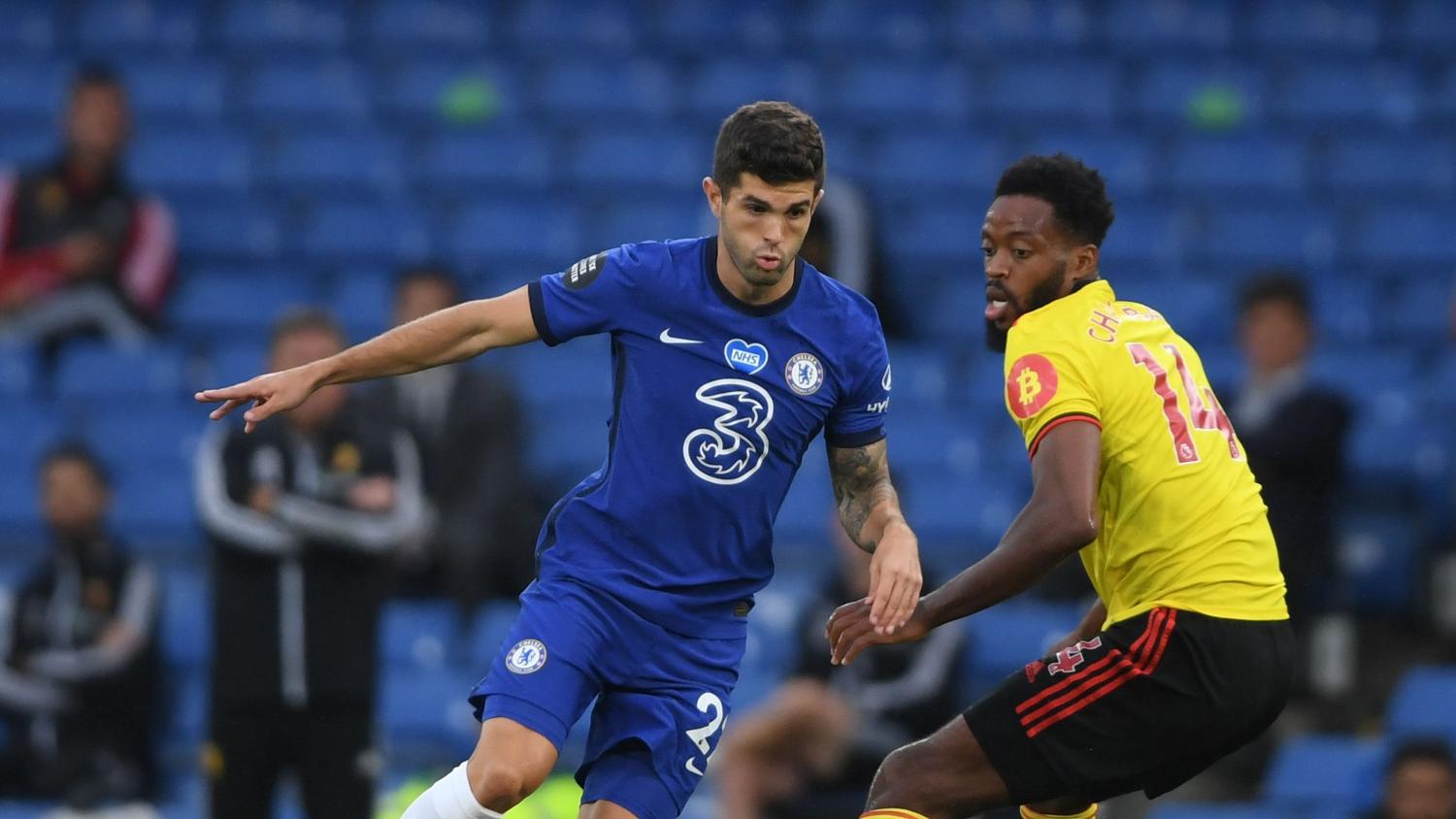 Chelsea beat Watford 3-0, in part due to a penalty drawn by Pulisic.
Getty Images

LONDON — First-half goals from Olivier Giroud and Willian and a late strike from Ross Barkley earned Chelsea a 3-0 Premier League victory over struggling Watford on Saturday and a boost to their ambitions for Champions League football next season.

France striker Giroud hit the target in the 28th minute, after a brisk move between Barkley and Mason Mount, with a low left foot shot that bounced in off the post.

Brazil's Willian sent goalkeeper Ben Foster the wrong way from the spot two minutes before halftime, after American winger Christian Pulisic, racing down the left, had drawn a clumsy foul from Etienne Capoue.

Barkley added a third in stoppage time, after being set up by captain Cesar Azpilicueta, following a flowing move between Ruben Loftus-Cheek and the ever-busy Pulisic.

It was a vital win for Chelsea, who lost to lowly West Ham United in midweek, as it returned them to fourth place after Manchester United had stolen the coveted spot for a few hours by beating Bournemouth 5-2.

Leicester City also cemented their third place with a 3-0 victory over Crystal Palace.

So Chelsea, as well as relegation-threatened Watford, were under pressure and Frank Lampard made key changes from the West Ham defeat, bringing in Giroud for Tammy Abraham, as well as Kurt Zouma and Reece James in defence.

But the home side laboured through the first half hour despite enjoying most possession against the bright yellow ranks of a well drilled Watford defence.

Giroud, then Willian twice, and Mount smashed the ball into the defensive wall from usefully placed free kicks outside the area.

But Giroud's sharp strike relaxed the London side and rattled the visitors. The second goal came as no surprise with Pulisic's speed and movement a constant irritation to Watford. Capoue floored the American though he was running wide of goal and shook his head in disappointment when Willian calmly put away the penalty.

Giroud looked keen to add to his tally in the second half, forcing Craig Dawson to save with a well placed leg and Foster to smother another shot from close range.

Watford, fourth from bottom and only a point above the relegation zone, enjoyed a purple patch late in the half, earning their first shot on target when substitute Adam Masina's distance effort was comfortably held by Kepa Arrizabalaga.

Masina had another crack from a free kick but again Kepa collected it.

And Kepa had to dive low in the 81st minute to parry a shot from another Watford substitute, Danny Welbeck.

But it was Chelsea who capitalised on their 70 percent possession at the death, with a smart move involving Loftus-Cheek, Pulisic and Azpilicueta who crossed the ball for Barkley to ram home.

"We needed that one today," Pulisic told Sky Sports. "We came out with a lot of energy and we needed a huge result, especially after dropping points in the last game. There was a bit of extra energy because of that loss and we wanted to prove a point."