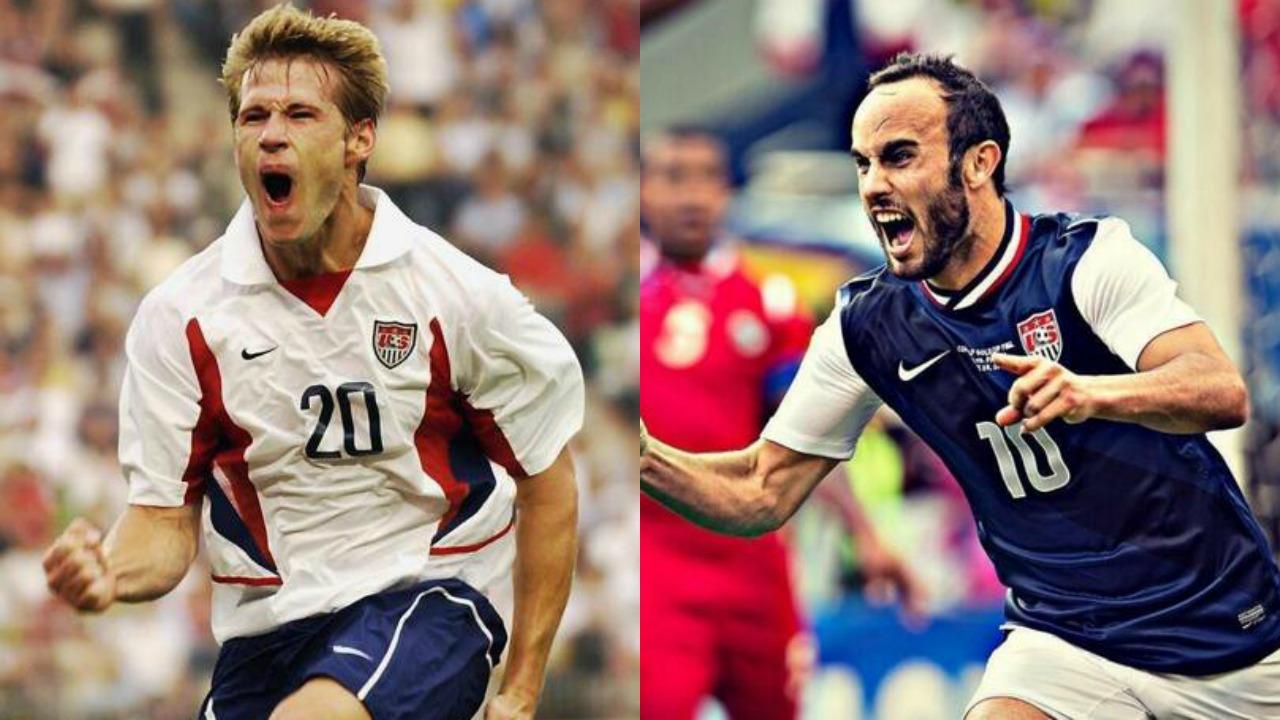 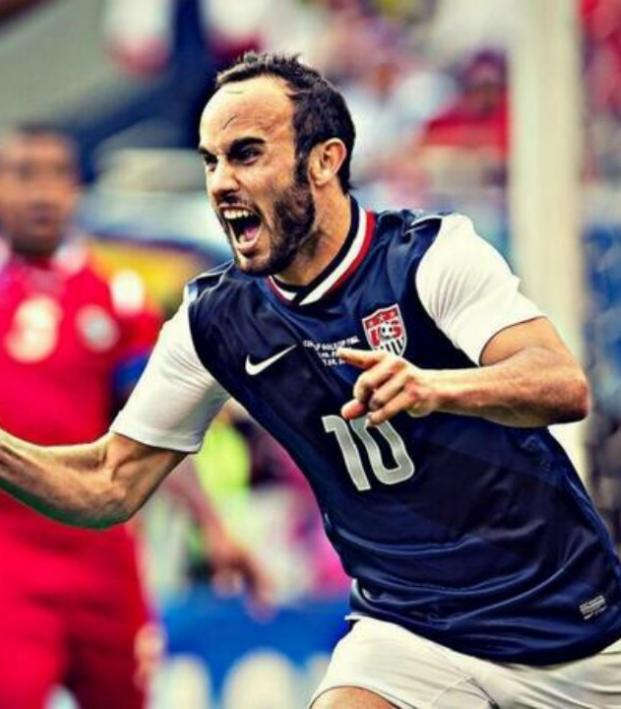 The United States has appeared in 10 FIFA World Cups, including the last seven straight. Out of those 10 appearances, they've fallen at the first hurdle on five occasions. The most notable exceptions include the first-ever World Cup in 1930 when the side finished third in the 13-team tournament and their run to the 2002 quarterfinals in Japan and South Korea.

In the 33 total matches the USA has played on the world's biggest stage, who've been the greatest performers? Using strictly World Cup finals matches as our barometer, here's a starting XI of Americans that've excelled at the World Cup. 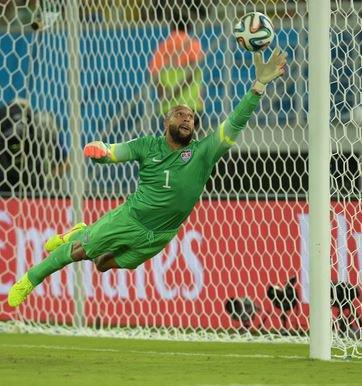 Tim Howard makes a save at the 2014 FIFA World Cup against Belgium.

With his record-setting 15 saves against Belgium in the 2014 FIFA World Cup Round of 16, no American has ever had a finer individual performance for the USMNT on the world's biggest stage. Howard's performance was one of the main talking points of the tournament, and it's generally forgotten that he was also named FIFA's Man of the Match against Portugal in the group stage.

Howard was also America's No. 1 at the 2010 World Cup, keeping a clean sheet against Algeria and helping his nation finish above England in group play.

Honorable mention: Brad Friedel — Friedel was in goal when the USMNT advanced to the quarterfinals of the 2002 World Cup. He saved two penalties during regular time, including one in an incredible performance against South Korea that salvaged a draw for the USA. 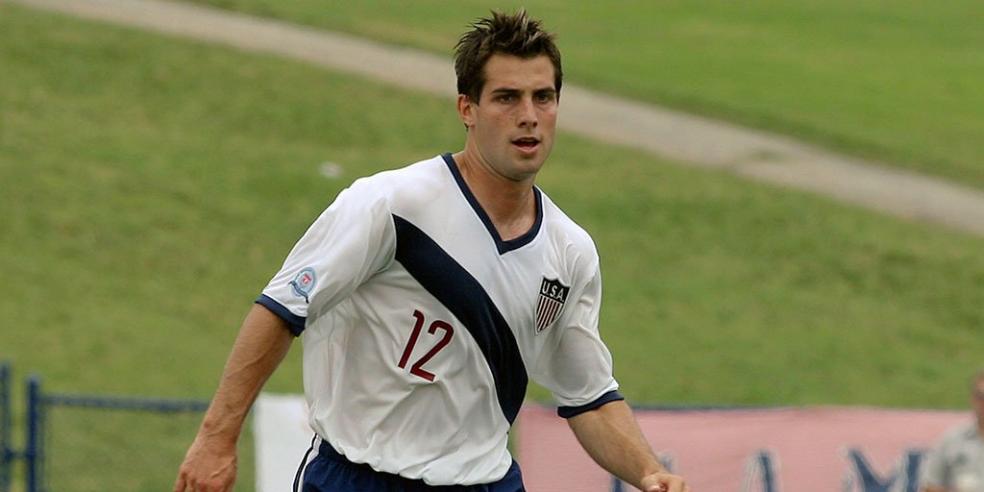 Carlos Bocanegra appeared in six World Cup matches for the USMNT — two at the 2006 event and four at the 2010 tournament. Bocanegra served as manager Bob Bradley's first-choice captain for the 2010 event, and he played every single minute of his side's run to the round of 16.

Honorable mention: Frankie Hejduk — Hejduk played for the States at both the 1998 and 2002 World Cups, and he started all three group matches at left back for America in Japan and South Korea. 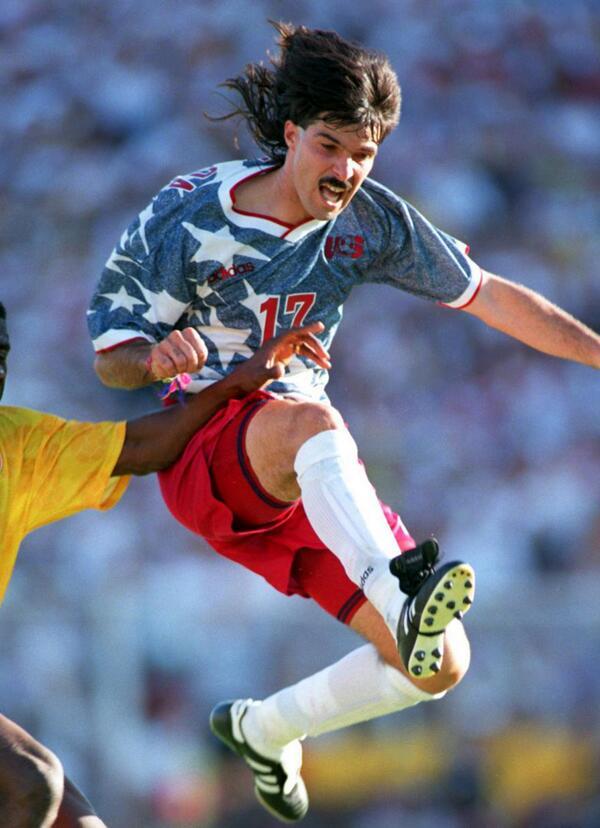 Marcelo Balboa defends against Brazil at the 1994 FIFA World Cup.

Marcelo Balboa appeared in eight FIFA World Cup matches for the United States while anchoring the defense at both the 1990 and 1994 World Cups. His performances for the U.S. at the 1994 World Cup cemented his reputation as one of the finest defenders in the history of the USMNT.

Honorable mention: Alexi Lalas - Lalas was an honorable mention All-Star at the 1994 World Cup when he played 90 minutes in all four of the USA's matches on home soil. 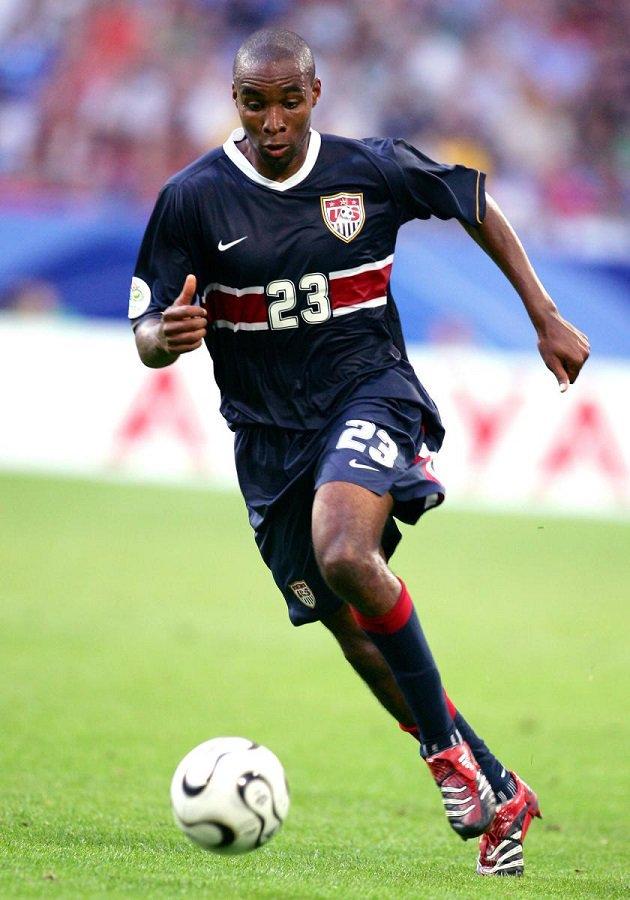 Eddie Pope in action at the 2006 FIFA World Cup.

Eddie Pope played in nine World Cup matches for the USMNT, and he was instrumental in America's run to the quarterfinals in 2002, shutting down a Mexican attack led by Jared Borgetti and Cuauhtemoc Blanco in the round of 16. Pope's final World Cup appearance for the U.S. ended in farce when he was sent off for two incredibly soft bookings against Italy in 2006.

Honorable mention: Matt Besler - Besler started all four games in the center of defense for the United States at the 2014 World Cup, playing with a consistency that few American defenders have ever come close to matching at the tournament. 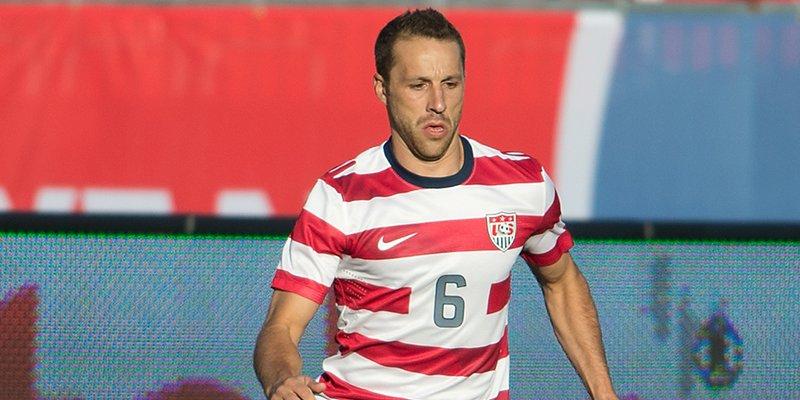 Steve Cherundolo playing in the Waldo stripes for the USMNT.

With seven World Cup appearances, Steve Cherundolo was a key performer for the States at the 2006 and 2010 World Cups — only an injury prevented him from playing at the 2002 tournament. He played all 390 minutes at the 2010 Cup, and he famously assisted Landon Donovan on his last-minute winner against Algeria.

Honorable mention: Tony Sanneh - Sanneh played every minute of the American's run to the 2002 World Cup quarterfinal, and he registered an assist for Brian McBride in the USA's upset of Portugal. 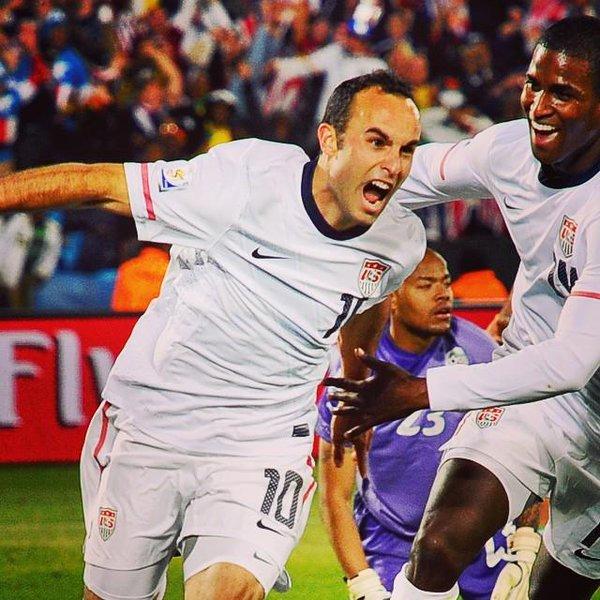 Landon Donovan celebrates his goal against Algeria at the 2010 World Cup.

No American has ever lit up a World Cup like Landon Donovan did at the 2002 event in South Korea and Japan. Named the tournament’s Best Young Player, Donovan played a key role in the American’s victory over Portugal, and he scored goals against both Poland and Mexico.

A superb save from Germany’s Oliver Kahn stopped him from writing his name into the history books in the quarterfinals. Following a disappointing 2006 World Cup, Donovan again outlined his importance to the USMNT with a heroic showing at the 2010 World Cup.

His memorable goal against Slovenia was subsequently topped by a last-second winner against Algeria, and he drew the penalty against Ghana to give the States hope in the round of 16.

With five World Cup goals, Donovan is the all-time top scorer for the U.S.

Honorable mention: Earnie Stewart - Stewart played in 11 World Cup matches for the USA spread over three different World Cups. Most famously, he scored the winning goal in America's shocking upset of Colombia at the 1994 tournament. 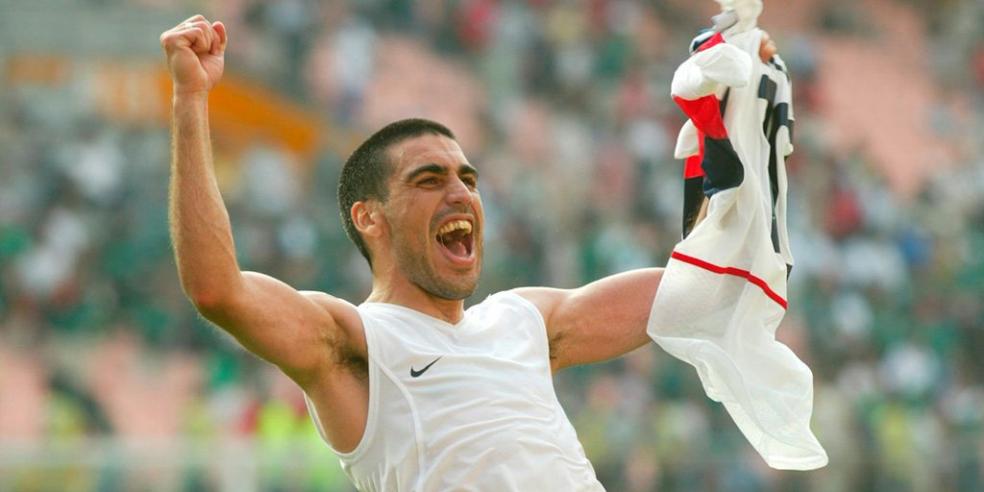 Claudio Reyna celebrates the USA's victory over Mexico in the World Cup round of 16.

Claudio Reyna became the first American in the modern era to make the World Cup all-tournament team with his performances from the heart of the USMNT midfield. For both the 2002 and 2006 tournaments, all good things funneled through Reyna, a player whose technique and ability was unmatched in the American squad.

He had an excellent match against Italy at the 2006 World Cup, but his international legacy ended on a sour note in the USMNT’s 2-1 defeat to Ghana. Reyna sprained his MCL when losing the ball to Haminu Draman, allowing Ghana to open the scoring while Reyna was substituted and later retired altogether.

Honorable mention: Michael Bradley - Bradley has been a key performer for the USA at the last two World Cups. In 2010, he scored a brilliant volley against Slovenia, and in 2014, he registered the assist on Julian Green's goal against Belgium. 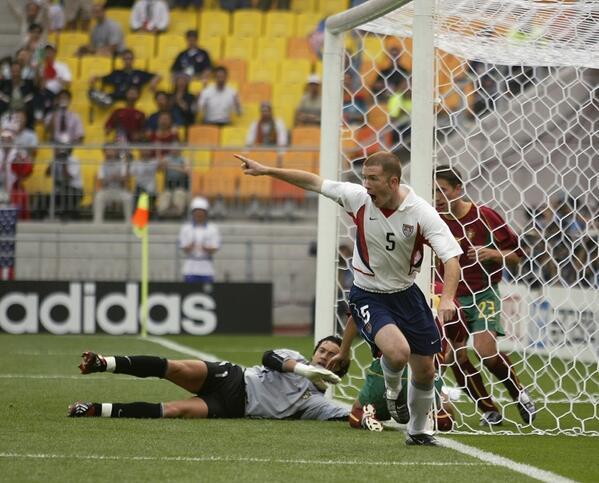 John O'Brien opens the scoring against Portugal at the 2002 FIFA World Cup.

John O’Brien was on the squad for three World Cups, but he failed to make an appearance at the 1998 tournament and an injury limited him to just one 45-minute appearance against the Czech Republic in 2006.

But O’Brien managed to play every minute of the 2002 World Cup as a defensive midfielder for the States, scoring against Portugal and providing the assist for Clint Mathis against South Korea. Paired alongside Reyna, the USA midfield went toe to toe with the likes of Portugal, Mexico and Germany and frequently dominated.

Honorable mention: Tab Ramos - Ramos appeared in three World Cups for the United States between 1990 and 1998. He suffered a fractured skull at the 1994 tournament in the USA's knockout round match against Brazil. 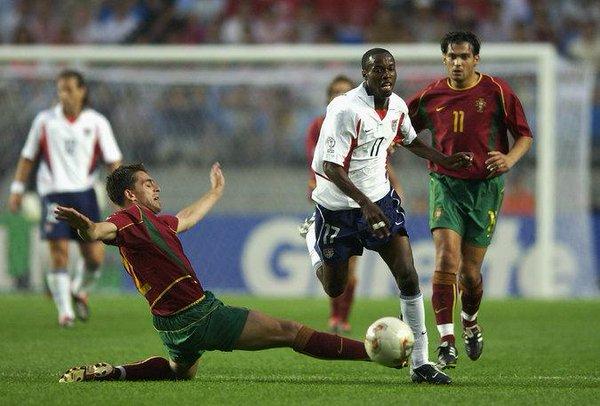 DaMarcus Beasley has participated in four World Cup for the USA, and he may add a fifth in 2018. The winger was a revelation at the 2002 tournament, and he assisted on Clint Dempsey's goal at the 2006 tournament. He made only one appearance at the 2010 Cup, but he played in all four USA matches at Brazil 2014.

Honorable mention: John Harkes - Harkes was a key player at both the 1990 and 1994 World Cups before being controversially omitted from the 1998 World Cup squad. 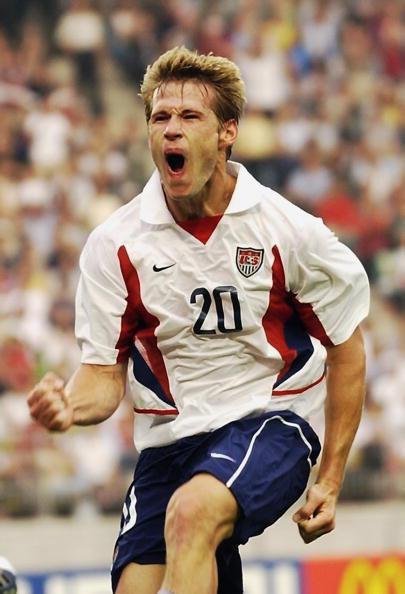 A member of three different World Cup squads, Brian McBride was only the second American to ever score at multiple World Cups. His goal against Iran in 1998 was the only bright spot of an otherwise disastrous tournament for the Americans, but it was his goals against Portugal and Mexico at the 2002 World Cup that secured his legacy as one of the greatest American strikers of all-time.

A lasting image of McBride will certainly be the gnarly gash he received after being elbowed by Daniele De Rossi at the 2006 World Cup — a blatant offense that earned the Italian a four-game suspension.

Honorable mention: Eric Wynalda - Wynalda played in three World Cups, and his 28-yard free kick against Switzerland at the 1994 tournament is perhaps the finest strike the USA has ever had at the World Cup finals. 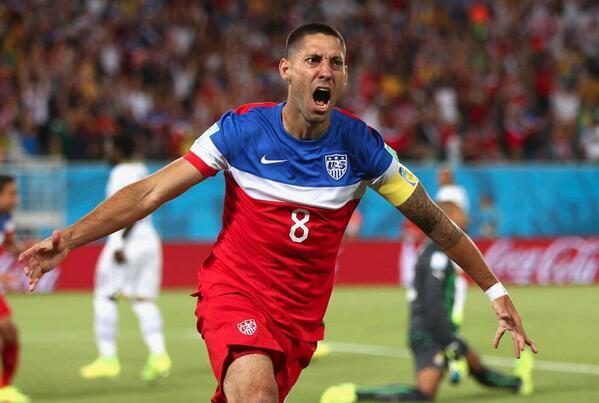 Clint Dempsey scores against Ghana at the 2014 FIFA World Cup.

The first American to score at three consecutive World Cups, Dempsey played a vital role in getting the United States beyond the group stage at both the 2010 and 2014 World Cups.

With two strikes against Ghana (one in 2006, one in 2014) to go along with goals against England and Portugal, the USMNT has never seen a more consistent attacker on the world’s biggest stage.

Honorable mention: Bert Patenaude - Patenaude scored the first hat-trick in the history of the World Cup back in 1930. He also scored against Belgium in that tournament, helping the United States finish third in the 13-team field.