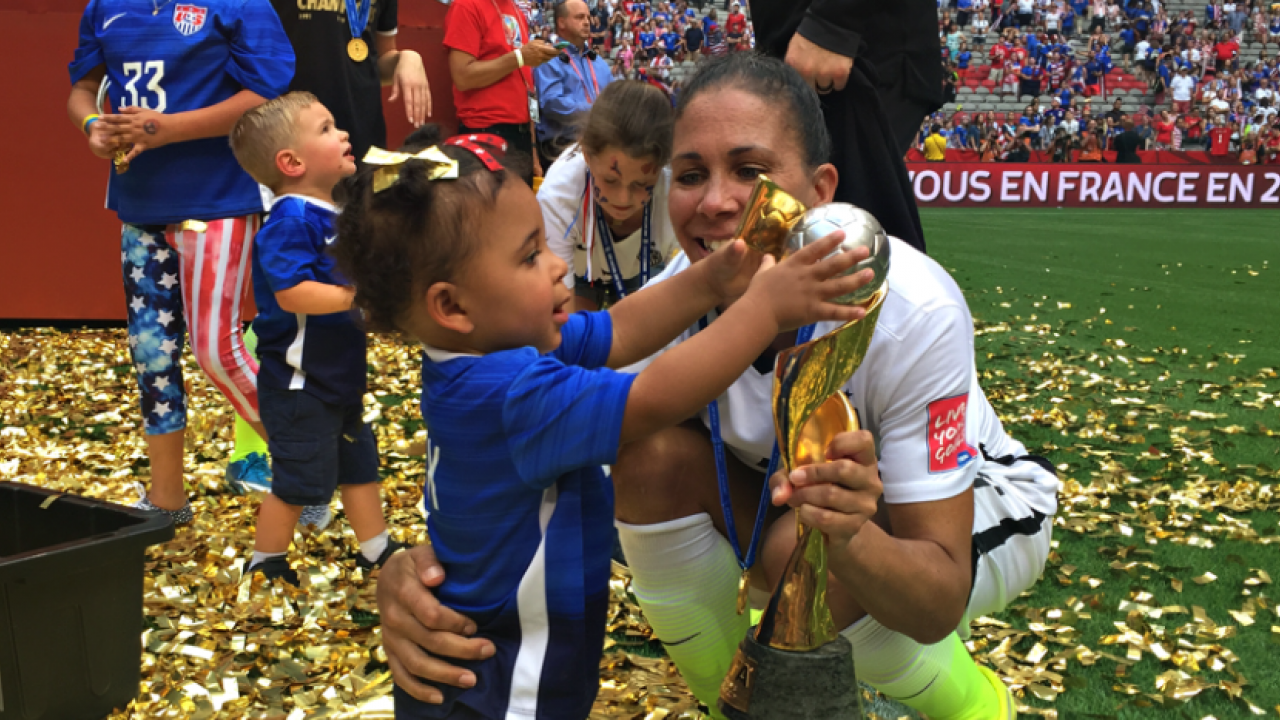 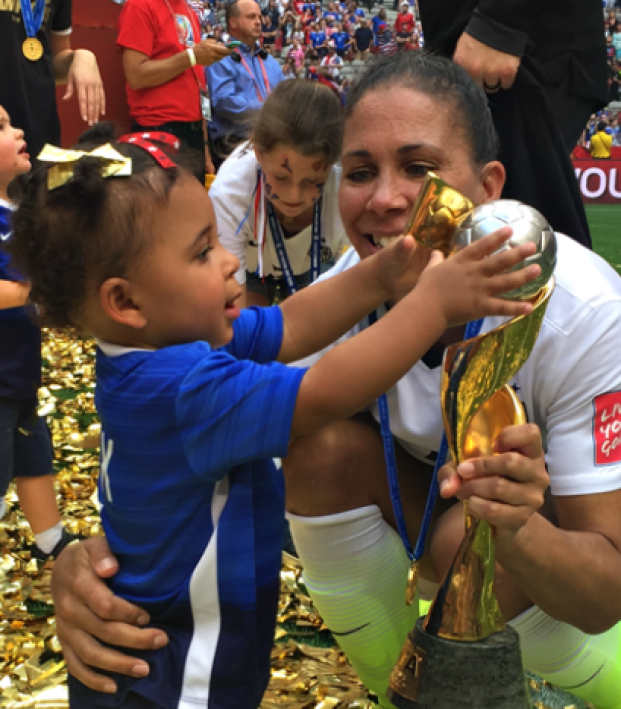 Female athletes have to deal with the physical side of becoming a parent. Male athletes do not have to worry or stress about their bodies changing over time, they are able to fully focus on their careers. Men don’t breastfeed, these female soccer players make a living with their bodies, which makes it even more impressive for them to return to the game they love after giving birth.

Christie Rampone, Amy Rodriguez and Shannon Boxx were able to find a balance between World Cups and motherhood. “If you love what you do, you’ll stay true.” 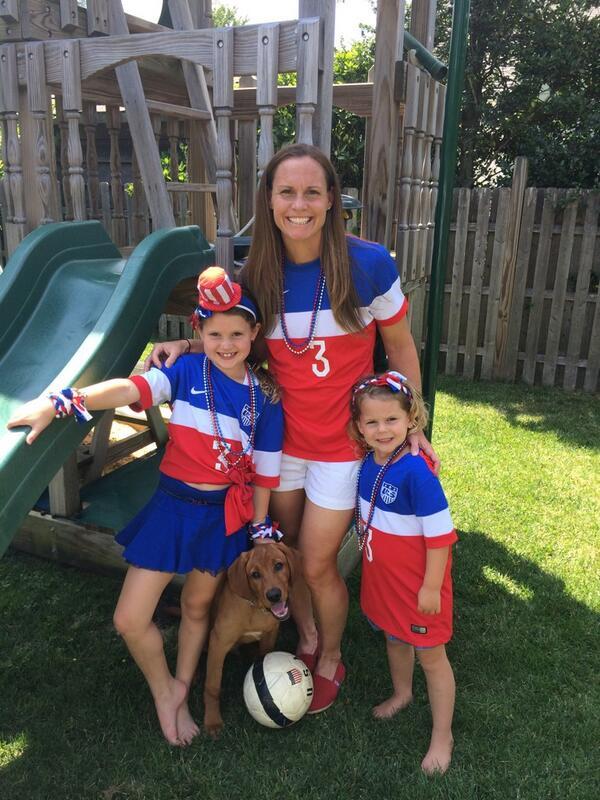 Christie Rampone ready to cheer on the USMNT with two daughters and family dog. GO USA.

If you follow Christie Rampone on Instagram then it is obvious how much love she has for her two daughters. Riley and Reece, ages ten and six, are Rampone’s biggest fans as well as future soccer players. The U.S. defender and mother of two is actively involved in her daughter’s personal and soccer lives but hasn't missed a World Cup or Olympic appearance since 1999. How does she make it work?

Julie Foudy, Rampone’s former teammate and friend, says Rampone has the hardest time when she is away from her kids. Foudy told The Guardian, “You are training for the World Cup and you are away from your children, that’s hard. But you are pursuing a dream and that is what you have to do.”

Rampone admitted to having a harder time getting back into shape after a torn ACL than after having kids: “With a pregnancy, you can workout pretty much all the way up to delivering, and then it was six weeks off.”

Rampone’s kids have bonded with her teammates since she often brings her family with her on the soccer-road. The girls are used to traveling for their mom’s soccer games, which allows for more family bonding time during Christie’s jam- packed schedule.

For moms who also have a hard time being away from their kids, Rampone suggests FaceTime. The soccer star will FaceTime her kids when they are picking out an outfit for school or working on their homework.

Rampone explained, “Having a child puts things in perspective. I want to inspire my girls to continue to do what you want to do even though you have a family and a career.” Fortunate for Christie, Riley and Reece will always be her number one cheerleaders. 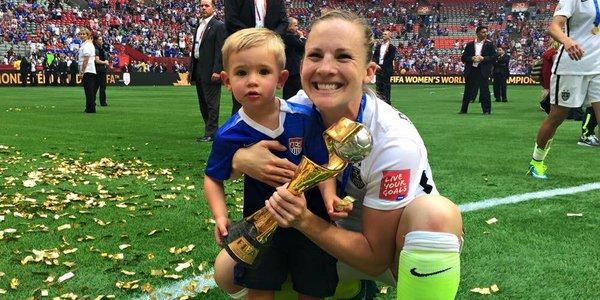 Amy Rodriguez first joined the USWNT in 2005, where she later won gold medals at the 2008 and 2012 Olympics and the 2015 World Cup. After three years of being married to college sweetheart Adam Shilling, Rodriguez discovered she was expecting.

“When I first found out I was pregnant, I was really scared. I didn’t know what that meant for my career. I didn’t know how I was going to do it,” Rodriguez stated after an unplanned, yet exciting pregnancy. Amy Rodriguez became a mother to son Ryan in 2013 but was not ready to give up her love of soccer.

Rodriguez returned to the game after being traded to FC Kansas City. She helped her team win the NWSL Championship by scoring both goals in their 2-1 victory in 2014. “I always joke with Christie Rampone that she made being a mom look really easy because I did not realize how hard it was,” Rodriguez explained. “I was so young when Christie had her kids in camp. Now I realize that when she had her kids around, I should’ve been lending a hand, asking, Christie, do you need something? I was so young and naïve. I just thought all the moms had it under control. Now I realize they don’t.”

Rodriguez was able to balance soccer and motherhood with a little help from her teammates, “Ryan had twenty other ‘aunties’ to help take care of him and hold him.” She recently welcomed another beautiful baby boy this past July. Congratulations Amy! 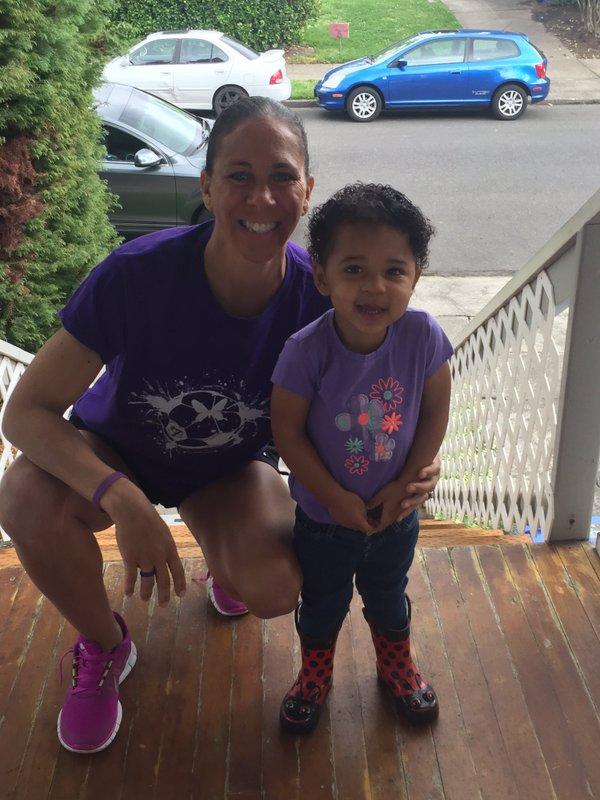 Shannon Boxx spent more time off the field in 2013 than on it. She originally planned on leaving the national team for a couple of months in order to receive knee surgery. She continued to take time away from soccer after finding out she was pregnant.

After giving birth to her daughter, Zoe, she found herself back at square one. “Getting back to where you were is tough, especially at 37,” Boxx said. She was also battling Lupus, a chronic auto immune disease, which became worse after her pregnancy.

Even though the gap in her professional career was longer than planned, she still wasn’t ready to say goodbye to soccer forever. “I missed the game so much and when I first got back to the field, the main thing I felt was excitement to play. I couldn’t wait. I was so happy to be out there.” Boxx explained. “This [was] my last World Cup run. It’s so cool to have my daughter at my games; just knowing she’s in the stands is the coolest thing. Even though she’s too young to know what’s going on, I love just having her there to take her picture and be able to say one day, ‘You were there, you were a part of this experience,’” Boxx shared.

Shannon Boxx has previously been seen with a soccer bag on one arm and a diaper bag on the other. Boxx's teammates have been more than teammates over the years. For example, Abby Wambach has been on baby duty in the past, helping Boxx's daughter stay happy and busy before the team's training session. 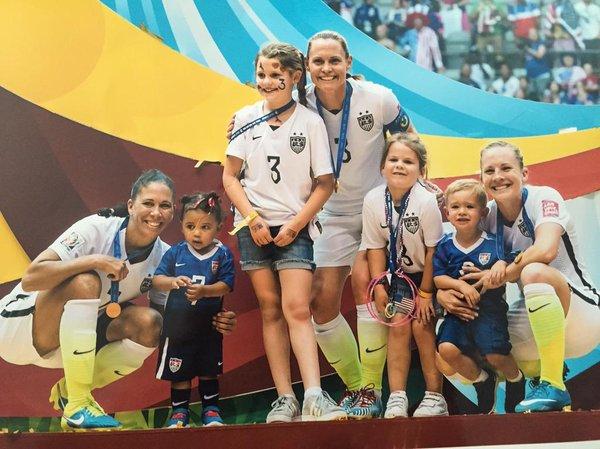 Rampone, Rodriguez, and Boxx posing with their children on the field after a great win.

Being a mom and a professional soccer player can be tough. Mother’s do not want to be separated from their children for too long. Luckily, U.S. Soccer provides 24-hour nannies for mother’s who choose to bring their kids on the road. They are available to help and accompany the little ones while the team has to focus or go train.

As soon as the team has downtime, they are able to continue playing with the youngsters. “All the kids on the team have 23 aunts who are ready to play with them, and when it’s time to change a diaper you give them back,” Heather O’Reilly joked to The Guardian.

There is an expectation for women to drop everything and retire during pregnancy in order to cater to her newborn. Most women want to cut back at work so they can be home and spend more time with their family. Moms who love what they do should be allowed to return to work post-pregnancy.

Rampone, Rodriguez and Boxx found the middle ground and are able to balance their soccer careers as well as family life. Even though they have all experienced stressful times on the road, they all suggest staying focused and calm because things happen, it is what it is. All three moms eventually returned to the field and couldn’t be happier. All it took was love, support and a positive mind…retirement can wait.