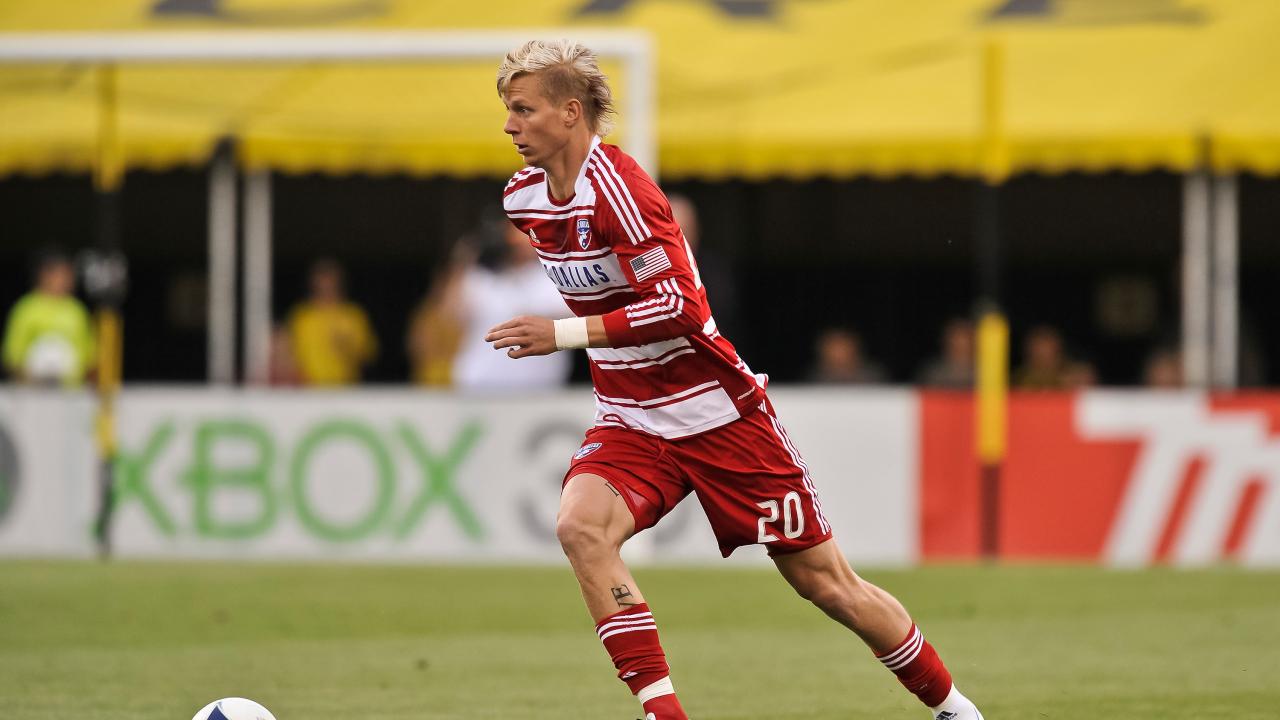 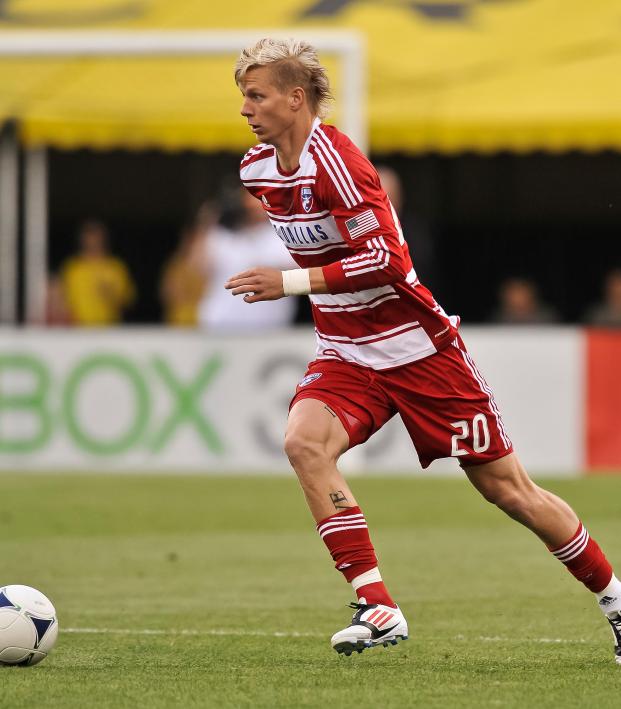 Four Coaches And Seven Years Ago: The Young American Talent From FIFA 14 Was Mediocre At Best

Not long ago, the American soccer landscape was a barren wasteland devoid of talent. Americans either played for boring MLS teams or obscure European clubs, always moving laterally and rarely improving.

Kids these days have Christian Pulisic at Chelsea and Sergiño Dest at Barcelona. We had a promising central defender at Birmingham City that now works at a financial company. Man, they have it easy.

FIFA 21 currently has 24 Americans age 23 or younger that have 80+ potential in career mode. That includes four players that can reach 84 or better, with Dest and Gio Reyna leading the way with 88 potential. That's wonderkid level.

How tough was it? Here's a list of the young Americans, age 23 or younger, with the highest potential in FIFA 14. It gets even better when you see where they're at now.

Even before his game-winning goal vs. Ghana at the 2014 World Cup, Brooks was the most promising American in FIFA 14 career mode. Brooks enjoyed four successful seasons in Berlin before earning an $18.7 million move to Wolfsburg in 2017, where he has been a steady performer ever since. Brooks is the only American on this list with a potential over 80.

FIFA 21 Rating: Not in the game

Gil was just 17 during his debut season with Real Salt Lake in 2011 after having previously spurned Arsenal. He had nearly 100 MLS appearances by the time he turned 20, but the talented midfielder never quite became a star. In 2015, he moved to Mexico to join Querétaro but never caught on. After multiple loan spells, Gil joined FK Viktoria Zizkov of the Czech second tier on a permanent basis in 2019. Gil now plays in the Czech second division with FC MAS Taborsko.

Palmer-Brown was only in the game for a month at this point, with his addition following his first professional contract at age 17. The young defender was subjected to a $1 million bid from Juventus just months earlier, which Kansas City rejected. Palmer-Brown failed to make an impact in MLS, but joined Manchester City in 2018 and has since fashioned out a solid career, albeit solely through loans.

He has spent the last two seasons on loan at Austria Vienna of the Austrian Bundesliga. While he might not reach the 83 overall I improved him to in FIFA career mode (maybe the best American I played with), Palmer-Brown is still just 23 and should be a USMNT consideree.

2013-14 marked the season of Shea's third and final appearance in the Premier League, a 31-minute cameo in a 4-0 loss to Everton. Shea moved to Stoke from FC Dallas the previous January for a $3.3 million fee but never quite broke through in England, making just 19 appearances across three seasons with Stoke, Barnsley and Birmingham.

His return to MLS in 2015 coincided with his last USMNT appearance, and Shea has experienced a quiet career since. In FIFA 14 though, he was one of those "broken" players that would inconceivably reach 89 overall a few seasons into a career mode even though he was still painfully slow. 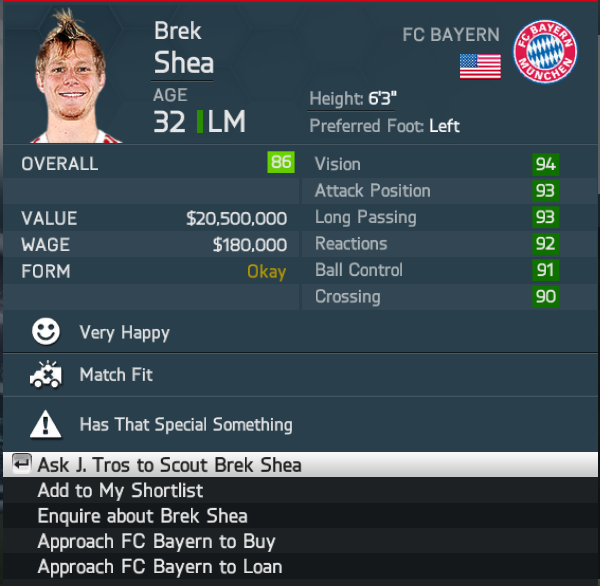 International superstar Brek Shea carving it up for Bayern Munich in the year 2022.

If not for injuries, we might be talking about Josh Gatt and not Christian Pulisic right now. Gatt was an 18-year-old in 2010 when he made his European debut for second-tier Austrian side SC Rheindorf Altach, which he chose over collegiate soccer at Indiana. He was then signed by Ole Gunnar Solskjær to play for Molde FK in Norway.

Gatt made almost 70 appearances for Molde, including seven in the Europa League, before a serious knee injury in 2013 devastated his career. He played just seven matches over the next three years before returning home to play in MLS. Just last week he signed for the Pittsburgh Riverhounds of the USL Championship, hoping to take the next step in an injury-riddled career.

Really excited to announce the next chapter in my career! I am very excited to be heading to the Riverhounds! Can’t wait to bring home a trophy in black and gold!  https://t.co/grB6CPqHIs

International Caps: 0 (one bench appearance in 2014)

FIFA 21 Rating: Not in the game

Born to an English father and an American mother, Packwood grew up in the states and moved to England at age 14, joining the Birmingham City academy. He made his senior debut as a 20-year-old in 2013-14, performing quite well in eight appearances for League Two Bristol Rovers on loan, then returning to Birmingham and playing in 12 Championship matches.

Packwood showed promise during two more loan spells the following season, but Birmingham chose not to extend his contract and released him. After a trial with the New England Revolution failed to produce a contract offer, Packwood's soccer career was over. He now works as a private equity associate at Hellman & Friedman in the Boston area according to his LinkedIn page.

Three substitute appearances at the 2014 World Cup made Yedlin seem like the best thing to ever happen to American soccer. At times, he almost was that. But too often he wasn't. Yedlin's best period came from 2014-16, when he joined Tottenham, then went out on loan to Seattle Sounders, Sunderland and then was purchased by Newcastle. His form for Newcastle has decreased significantly, and in January he joined Galatasaray.

Much like Yedlin, Green was hailed as the future of American soccer following his performance at the 2014 World Cup, during which the 19-year-old Green scored against Belgium in his lone 14-minute subsitute appearance of the tournament. He was a member of Bayern's B-team at the time, but would only make four senior appearances for the German giants, instead spending much of his career there with the second team or out on loan.

In 2018, Green moved to Greuther Fürth of the 2.Bundesliga, where he has steadily improved. 2020-21 has been his best year, posting seven goals and two assists thus far. After three years out of the USMNT, could an international call-up be in order?