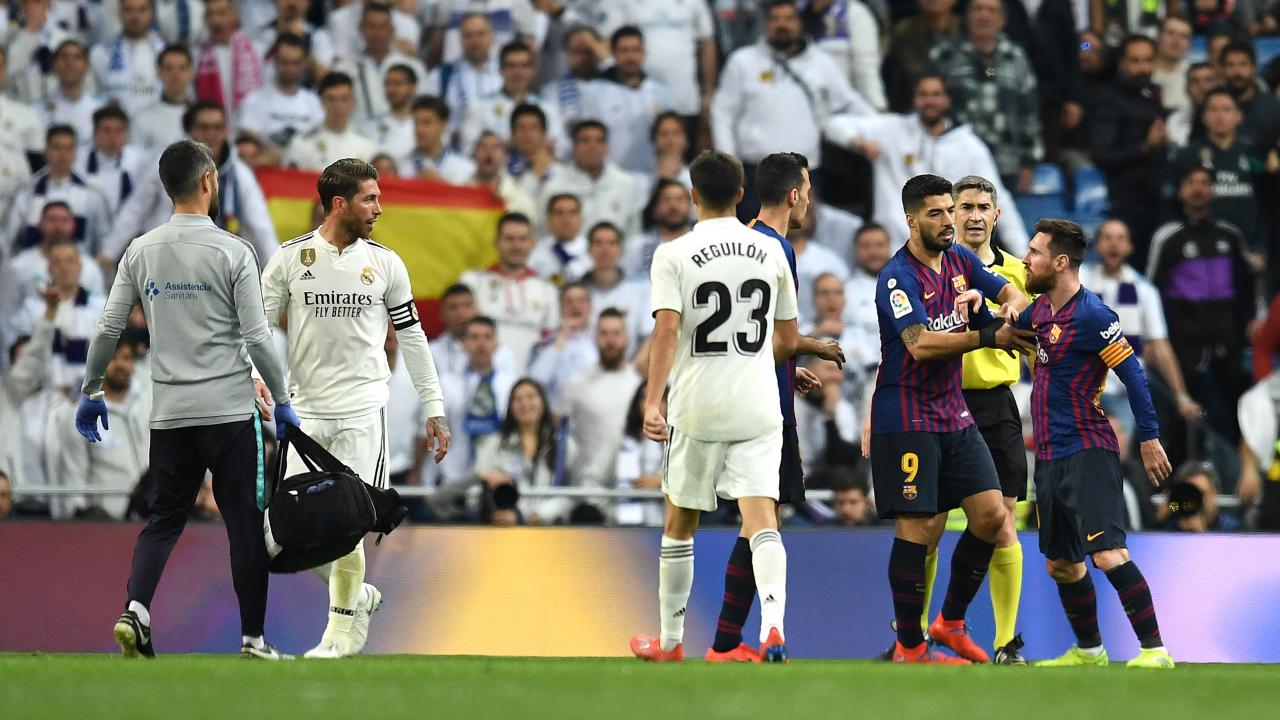 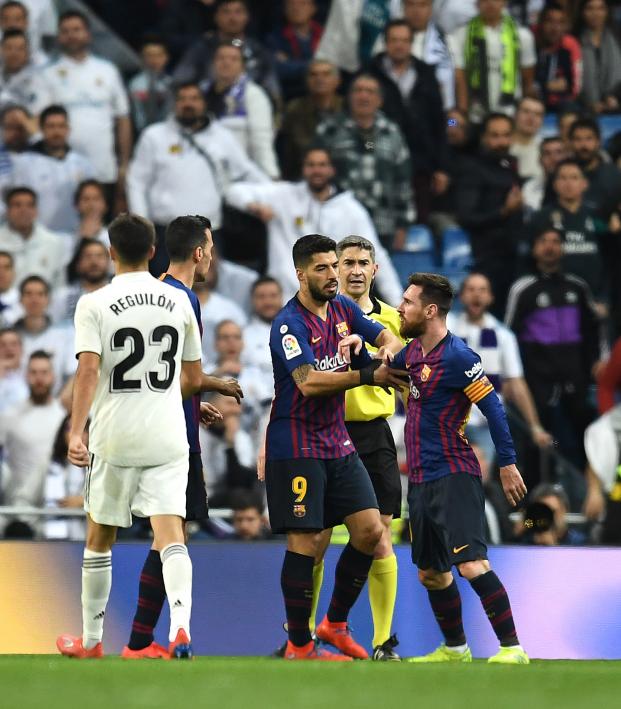 The History Of El Clásico, From Searching For People ‘Who Like This Sport’ To Flying Pigs

The El Clasico history and corresponding rivalry between Barcelona and Real Madrid is entirely without equal in the world of sports. To say otherwise is to be completely ignorant of the animosity between these two clubs forged over conflicts of identity, philosophy, civil war and the simple fact that these two great cities frequently house the best football teams on the planet.

Barça and Real are foundational institutions with beginnings around the turn of the 20th century. Real boasts the most LaLiga titles all time with 34 (Barça has 26), Barça has the most Copa del Rey triumphs (30 compared to 19 for Real) and Real is the most successful team in European competition history (13 Champions League titles compared to five for Barça).

The rivalry certainly proliferated in modern times with Cristiano Ronaldo at Real Madrid and Lionel Messi at Barcelona, but Ronaldo’s now gone and Messi will soon follow suit. Still, Real and Barça will remain the two clubs that footballers cannot say no to, and El Clásico will forever remain the most looked forward to event on the club calendar.

Here's a brief history of El Clásico, along with some select matches, events and records.

Barcelona was founded in 1899 after traveling want-to-start-a-football-club guy (one of the finer professions of the late 19th century) Joan Gamper placed an advertisement in Los Deportes requesting “that everyone who likes this sport contact him, come to his office Tuesday and Friday nights from 9 to 11.”

Real Madrid, on the other hand, was founded three years later (1902) by a group of interested participants who’d broken away from some of the first clubs in the city to form Madrid Football Club. Julián Palacios was the first president at the age of 20, and he was succeeded by the wonderfully bearded Juan Padrós a couple years later. 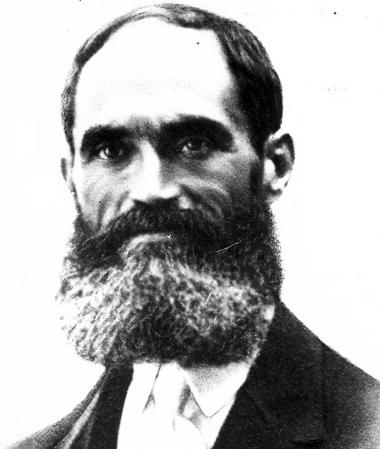 Competition was mostly regionally based around this time, but the Copa del Rey was first introduced in 1903, making it the oldest football competition in Spain. The Primera División (LaLiga) was formed in 1929 and included six previous winners of the Copa (Real Madrid and Barcelona among them), as well as four other clubs for a 10-team first division.

Meetings in the Copa and LaLiga formed the basis of El Clásico, and the strength of the rivalry has been helped by the fact that Real and Barcelona (along with Athletic Bilbao) have never been relegated from the top flight.

The first-ever competitive meeting between the clubs was the 1916 Copa del Rey semifinals, where Real Madrid ultimately won a four-game series (two wins, one loss, one draw) with club legend Santiago Bernabéu scoring eight goals over the course of it.

The first LaLiga meeting took place on Feb. 17, 1929. The first European contest between the clubs was the semifinals of the 1959-60 European Cup, which Real Madrid won 6-2 on aggregate with Ferenc Puskás scoring three and Alfredo Di Stéfano adding two.

The First Spanish Republic existed between 1873 and 1874 but quickly gave way to the Restoration, which was achieved by way of coup d'état and restored the monarchy under Alfonso XII. The system faced opposition around the country, most notably from Basque and Catalan nationalists.

It was around this time that Catalonia aimed for self-government and recognition of the Catalan language — a feeling which grew following the end of the Spanish-American War.

The period of the Restoration ended in 1931 with the founding of the Second Spanish Republic, which lasted until 1939 and the outcome of the Spanish Civil War. That outcome, after roughly 500,000 casualties in Spain, was the establishment of a military dictatorship under Francisco Franco.

The Spanish Civil War also saw Josep Sunyol — the president of FC Barcelona and a member of the Republican Left of Catalonia — arrested and executed by Franco’s troops while traveling north of Madrid. This period also saw Barcelona become synonymous with Catalan nationalism while Real Madrid became synonymous with the establishment and Franco’s regime.

Francoist Spain lasted until the dictator’s death in 1975, and then the country transitioned to democracy with the 1977 general election. This history has sown the longstanding view of Barcelona being aligned with left-wing ideology and Real Madrid with the right-wing.

According to many, the real animosity between the clubs began with a meeting in the semifinals of the 1943 Copa del Rey — a match that, in hindsight, now bears all the hallmarks of a modern Clásico.

The first leg was won by Barcelona 3-0 in Catalonia, but Real wasn’t happy about the treatment they’d received from opposition players, fans and the referee. The return leg in Madrid was stoked by malicious reports in the press and Barcelona players were met with a barrage of stones, coins and bottles.

Real went up 3-0 and Barcelona had a player sent off, leading to the “absurd and abnormal” scoreline and bitter feelings on both sides of the divide.

The Transfers of Alfredo Di Stéfano and Luís Figo

By 1990, Barcelona still hadn’t won the Champions League. Real Madrid, on the other hand, had already won six. Key to that was that the first five editions of the European Cup — staged between 1956 and 1960 — where all won by a Real squad led by Di Stéfano.

The Argentinian-born forward was a target of both Real and Barça after running shit with Millonarios, and he was initially supposed to split his time between the two clubs after a drawn out legal battle that saw FIFA serve as the intermediary. However, this initial agreement angered Barcelona members and led to Di Stéfano signing a four-year contract with los Blancos, as well as the resignation of Barça president Enric Martí Carreto.

In total, 39 players have made the switch between the rivals with the most recent being Javier Saviola (168 Barcelona appearances; 29 for Real Madrid). However, the most notorious transfer was that of captain Luís Figo for a new world-record fee of nearly $73 million back in July of 2000.

After making a number of promises to his teammates, fans and the Barcelona board about his desire to stay at the Camp Nou following five hugely successful seasons, Figo’s sudden U-turn sent shockwaves around the planet.

He would also spend five seasons with Real Madrid, but his every return to the Camp Nou was met with flying oranges, bottles, cigarette lighters, mobile phones, golf balls, coins and a pig’s head. 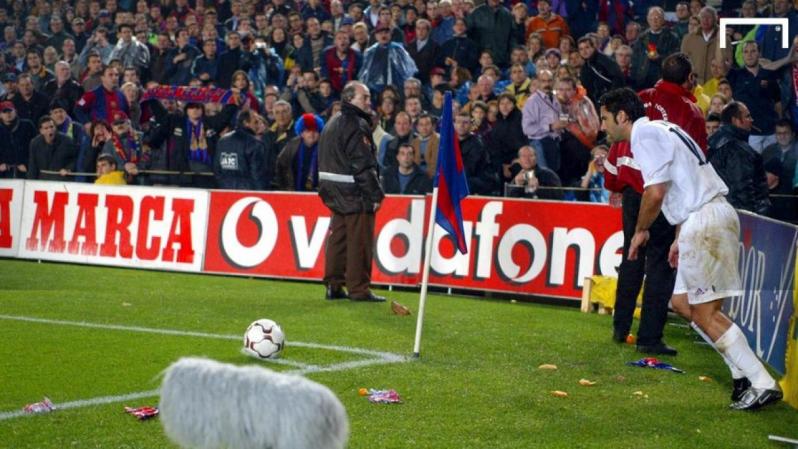 Real Madrid snapped Barcelona’s winning streak by earning a 1-1 draw in league play, but the two clubs would meet again in the semifinals of the Champions League with Barcelona winning 3-1 on aggregate after Messi scored a brace in his side’s 2-0 win at the Bernabéu. Here’s Busquets with the greatest assist of all time for Messi's second.

An incredibly good Real Madrid, under the leadership of José Mourinho, won the 2012 league title — bringing an end to Barcelona’s three-year run — by collecting 100 points and scoring 121 goals.

The season saw Messi and Ronaldo reach otherworldly levels as the Argentine scored 50 league goals and the Portuguese hit 46. However, with only five match days remaining and the two clubs racing neck and neck for the title, it was Ronaldo’s late strike at the Camp Nou that settled things.

His “calma” celebration is now the stuff of legend.

Gareth Bale before Madridistas hated him for having a hobby.

Messi wins it at the death — you know the celly.

In competitive matches — we really don’t care about the ICC in Miami — the rivals have met 244 times. Real Madrid has won 96, Barcelona has won 96 and 52 games have finished level. No matter how many times I hear that, my mind still boggles.

Most Assists In El Clásico