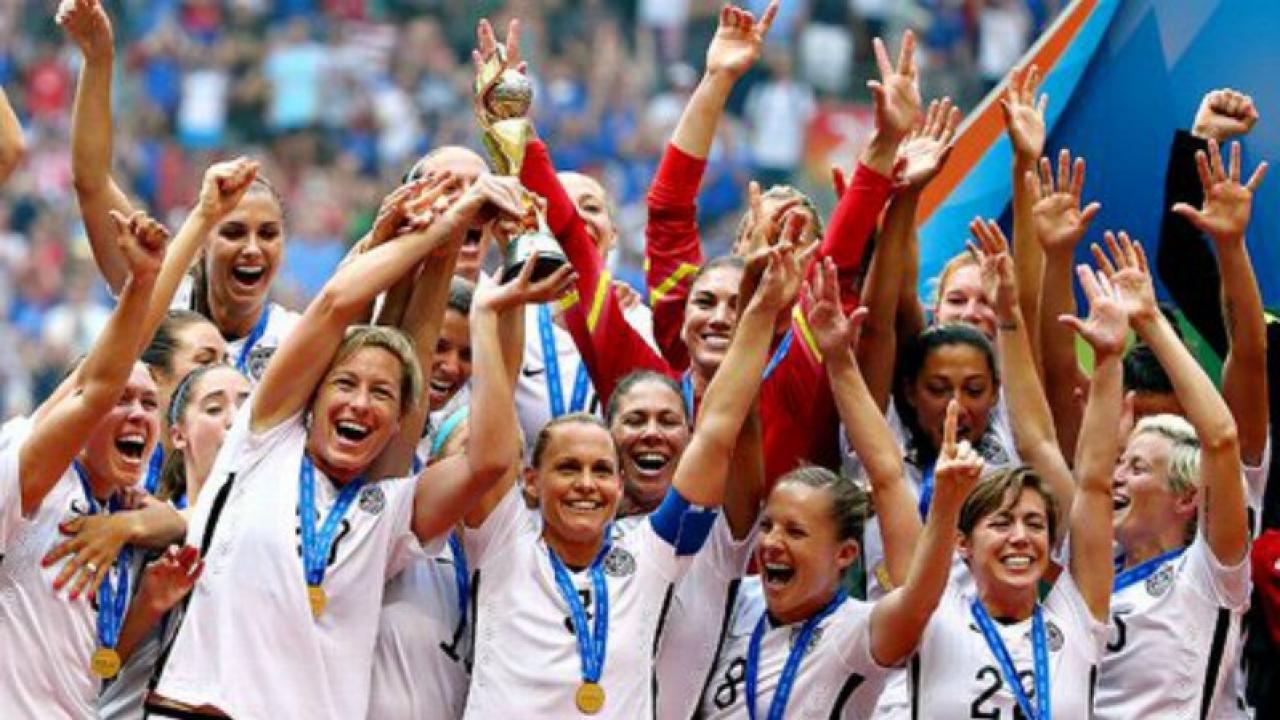 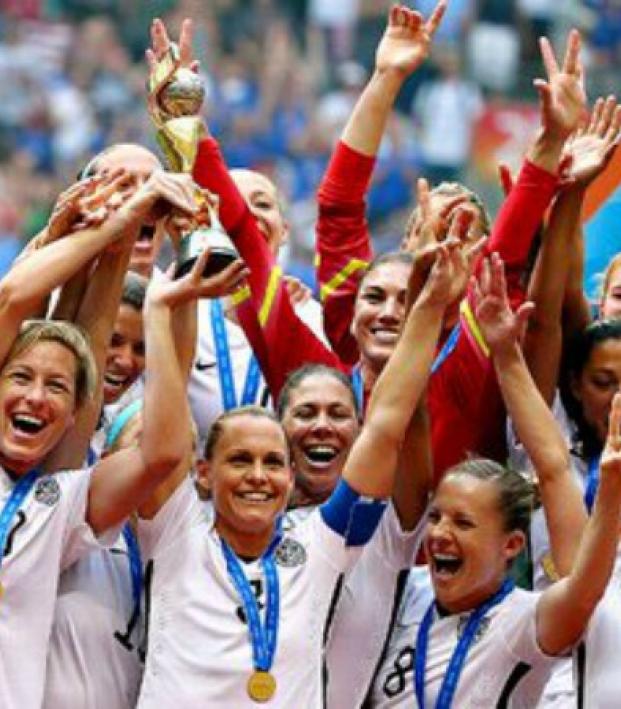 Now That The World Cup Is Over, The Real Game Begins

Sam Klomhaus July 12, 2015
Now that the USWNT has won the World Cup, is the growth of women's soccer in the U.S. sustainable?

Hand-wringing was an appropriate response to how the U.S. Women’s National Team began their World Cup run.

After a 3-1 win versus Australia that, to hear the Matildas tell it, was dominated by the losing side, the U.S. slogged to a disheartening 0-0 draw with Sweden — disheartening, anyway, for at least a few fans and everybody who gets paid to have opinions on the USWNT. They escaped (and/or won, depending on your perspective) the group of death with a 1-0 victory over Nigeria. They looked sharper in the knockout round, advancing 2-0 vs. Colombia in the round of 16 and 1-0 vs. China in the quarterfinals. There were a lot of questions whether the U.S. could hold its own against the likes of Germany and, if they reached the final, Japan.

Then Carli Lloyd pressed the “NOS” button and the rest was history (for an overview of factors that allowed Ms. Lloyd and her teammates to press the “NOS” button, click here).

“That will happen during a tournament,” said Western New York Flash midfielder Becky Edwards. “You want to be playing your best at the end.”

The same could be said for a lot of things, but I’m going to say it now for sports in general. Sports have never been as closely followed as they are being followed right now (example: this site couldn’t have existed even five years ago). Any sport finding itself on an upward trend in popularity like, say, women’s soccer, is going to have an advantage over sports on a relative decline like, say, baseball.

So, if ever women’s soccer needed a big splash, the moment had arrived. And Carli Lloyd and company gave women’s soccer the biggest splash possible. But was it enough?

“I think it’s been pretty incredible to see the support and the interest from America and the world,” Edwards said.

Portland Thorns defender Rachel Van Hollebeke (formerly Buehler) said she thinks the popularity of women’s soccer will continue to a certain degree no matter what. Whether that growth is sustainable remains to be seen.

“There’s interest, but will that continue is the question,” said Edwards, who last October was traded to Western New York from Houston for Carli Lloyd. “Hopefully it carries over to the Olympics.”

The USWNT will likely be favorites in the 2016 Olympics in Rio de Janeiro, Brazil after their victories in the World Cup and the 2012 Olympics. Between now and the Olympics we will see whether women's soccer can keep itself in the public eye.

“It was just a joy to watch them win,” former NWSL and USWNT defender Nikki Marshall said. “I certainly hope it propels people to look at the women’s game more.”

The National Women’s Soccer League was founded in 2012 and has nine teams, each of which employs the services of at least one player on the WWC champion team. Among Van Hollebeke’s Portland teammates are World Cup standouts Nadine Angerer (Germany), Tobin Heath and Alex Morgan (both USA).

The NWSL is a fledgling league, in a spot right now with more questions than revenue streams. The World Cup victory can only help the league, but how much?

Hopefully, they will want to watch her in person.

“The biggest thing is buying tickets,” Edwards said. “We need to bring in more revenue. We need more money in our league.”

Edwards said it’s important for the general public to realize many NWSL players are not as well-off as those who play for the National Team.

The highest-paid players in the NWSL make less than the minimum salary in MLS, but USWNT players have far more endorsement opportunities plus tournament bonuses (they will each take home $300,000 for winning the World Cup).

Also, USWNT players live a cut above the rest when they’re with the national team. Their hotels, airplane seats and facilities are better than what NWSL clubs can provide.

With continued growth of the NWSL, female soccer players will receive salaries that allow them to live comfortably, if not in the luxury that we associate with professional athletes today.

Women's soccer players are also nice people, even when some idiot media urchin (in this case me) asks them a question straight from the “How to Bore a Professional Athlete to Death” handbook.

“They went in and did what they needed to do,” Lomnicki said of the team’s form in the knockout stage after “struggling” in their group. “I never really had a doubt they would improve.”

So women's soccer players have good manners. One thing athletes in other sports have, though, is recognition. Women’s soccer is lacking in that particular category, but the players are hoping the World Cup victory can spearhead women’s soccer into the mainstream.

It will not be easy, but, at the very least, the conversation has begun.

The first question is easily answered. Aside from a few noteworthy events (Babe Didrickson’s career, the battle of the sexes, whenever the USWNT wins the World Cup, etc.) women’s sports have been second-class citizens. Like, sports fans have been saying, “That’s nice, girls have sports too. They’ll never be as exciting as the men though” before turning back to the T.V. to watch a batter call timeout to adjust his cup.

Men’s soccer has been criticized for years because of the injury-faking and because of the players generally acting like toddlers. That trend, though, is not limited to soccer. Mainstream sports like football and basketball are not far behind (hockey is an exception to this, but nobody watches hockey anymore), and closing the gap rapidly.

The funny thing is that female soccer players exemplify all the characteristics that we as a sports-watching society value in men. Sportswriters, particularly the old, stodgy newspaper-columnist-types (Dan Shaughnessy, for example), decry the loss of qualities like humility, toughness, loyalty and resiliency in modern athletes.

Female soccer players are by and large keep-your-head-down, gritty types who would have their praises sung from the mountaintops by sports media if they were men.

Still the best explanation of women's vs men's sport I've ever seen: pic.twitter.com/gVOuRzBDQg

Convinced that female soccer players are as tough or more as we want our male athletes to be? Good. Now watch it again.

The point is this: the best way to get the message across to “mainstream” athletes that they should be tougher is to watch a sport that already exemplifies the qualities we want to see.

It takes just one moment of recognition, like “Hey that girl’s pretty tough. I think I’ll keep watching.” If they keep watching, then they’ll begin to grasp the nuances of the sport. Once that happens, they become soccer fans.

The question is how to get people to realize that they would actually like women’s soccer if they just gave it a chance.

A lot of people gave women’s soccer a chance during the Women’s World Cup final, and Carli Lloyd et al. gave them a hell of a show.

That show could lead to good things for women’s soccer, which is growing more than any sport in the U.S. (whether that’s because soccer has more room to grow than other sports is up for debate).

First, Van Hollebeke said, is the fact that soccer is being introduced to people who previously were not part of the soccer culture. She referenced her husband, a construction project manager, who noticed a rise in soccer knowledge from his coworkers, both because they worked with someone married to a professional soccer player and because the World Cup was going on.

A big part of this phenomenon is the FIFA video games, which have achieved massive popularity and next year will feature select women’s national teams, including the USWNT.

The NWSL has seen a spike in ticket sales, but Van Hollebeke said a similar spike occurred after the 2011 World Cup and quickly petered out. If this new growth in attendance can be sustained remains to be seen. If the U.S. women hadn’t shaken off that slow start, would their game be as popular? Probably not. Even just a few days later, you can see the heightened awareness of the women’s game. The reason the USWNT shook off that slow start, though, is because they are exactly the archetypes of world-class athletes that we see in our minds’ eyes.

“I was a bit worried about where they would land, but they really came on strong. I think it’s just a part of their character,” Marshall said. “It’s kind of corny but I think it’s just the American mentality.”

If there’s any group of people who can collectively decide that they are not going to be stopped by society and break through the glass ceiling and put women’s soccer, and soccer in general, into the mainstream of the American sports consciousness it’s the group of women who shook off a sub-par group performance and rampaged their way to the World Cup title.

“These women are incredible role models for our game,” Edwards said. “They had the attention of the whole world and that’s truly special.”

Now all they have to do is keep it.