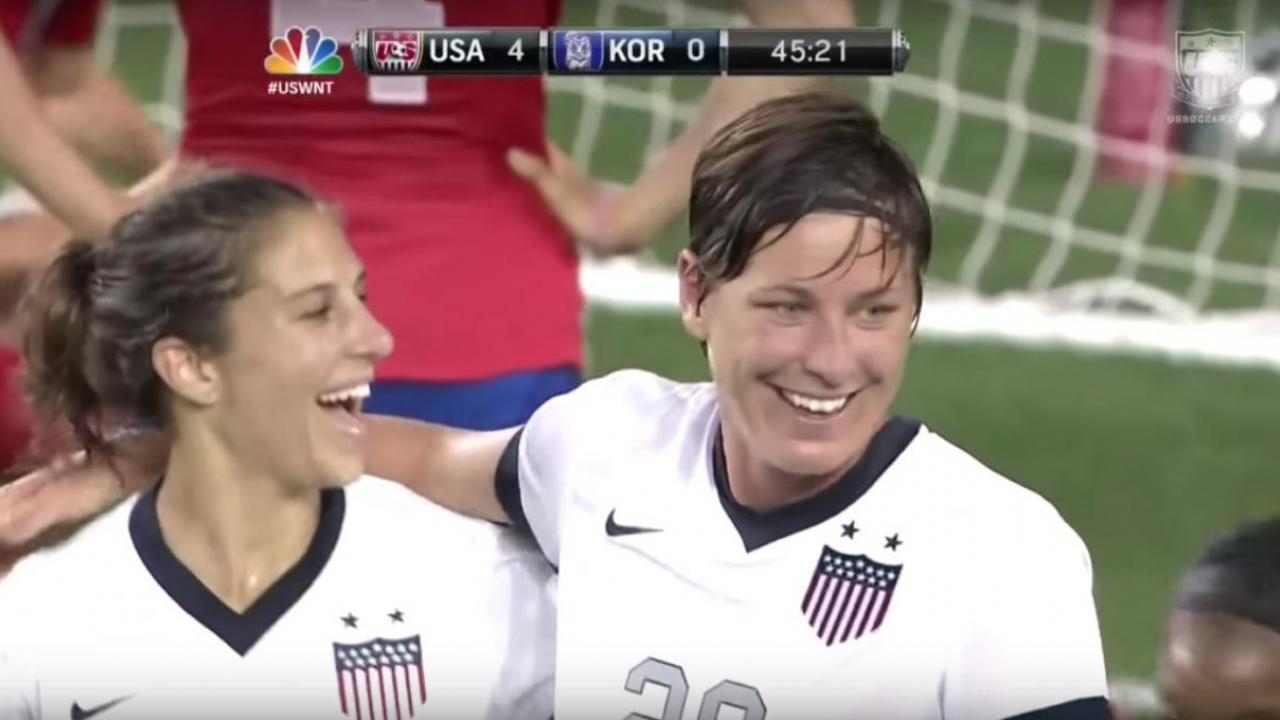 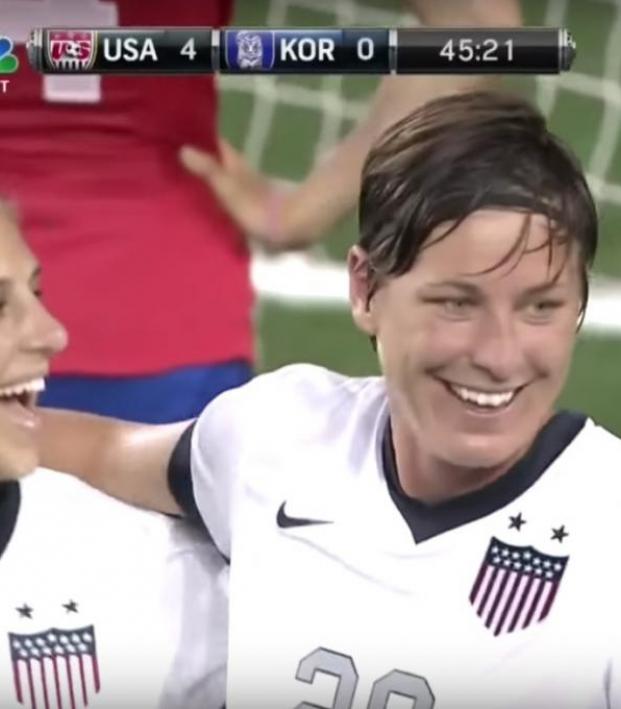 Ivan Anich February 25, 2016
Wambach is the all-time leading scorer in international soccer history. A title that will be held by a woman for a long, long time.

Abby Wambach is the all-time leading scorer in international soccer. She has a stunning 184 goals; 23 more than her nearest female competitor, Christine Sinclair, and 75 more than her nearest male competitor, Ali Daei.  No man alive today has a legitimate chance at breaking Wambach’s record. She originally claimed the record during a friendly against South Korea on June 20th, 2013. She scored four times as she did so. A feat that will remind some of Lionel Messi, who has a habit of scoring a hat trick when he breaks a record, and perhaps does so fittingly. Messi might score hat tricks, but Wambach did him one better; Messi might be an amazing player, but he has zero chance of taking the title of all-time leading scorer in international soccer away from Wambach. In fact, no man alive can.

Since that day in 2013 Wambach has raised her total, and the all-time record, to 184 goals (in 255 games for a scoring rate of 0.72 goals per game). An achievement that rings out as one of the greatest in sports. Now that she is retired, the world has a chance to match it, but that won’t happen anytime soon.

The aforementioned nearest female competitor is Canada’s Christine Sinclair. Sinclair currently has 161 goals and a scoring rate of 0.69 goals per game. With that rate she would need to earn approximately 34 more caps (jargon for international matches/appearances) in order to break Wambach’s record. Calculating the average number games per year the Canadian WNT has played over the past decade, and using that number (15.8 games per year) to make an estimation, she would have to play at least two more years in order to break it. Should she do so at this pace, she would be around 34 years old when she claims the top spot. Sinclair's chase of Wambach is legitimate, and just might be the only one in the world.

Looking at the best male players active today, we see some massive names but relatively mediocre scoring rates. Messi and Cristiano Ronaldo have 49 and 55 international goals in 105 and 123 caps, for scoring rates of 0.47 and 0.45 respectively. Wambach’s career rate was 0.72. Messi and Ronaldo would have to play about 287 more international games to break Wambach’s record, assuming they could maintain their current goal scoring abilities throughout. The unlickliness of that is comounded by the fact that, at the rate they have been earning international caps throughout their careers, they would have to keep earning earning caps well into their 50s. They are amazing players, arguably the best of all time, but that is just not going to happen.

The situation doesn’t get any better when we expand the field outside of Messi and Ronaldo. Zlatan Ibrahimovic has 62 goals in 111 international games for a rate of 0.56 goals per game. Wayne Rooney, 51 in 108 for 0.47. Robin van Persie, 50 in 101 for 0.50. Robbie Keane, 67 in 143 caps for 0.47, and he’s the highest active scorer in international soccer. Keane, Zlatan, Rooney, and RvP would also have to play well into there 50s in order to break Wambach’s record. 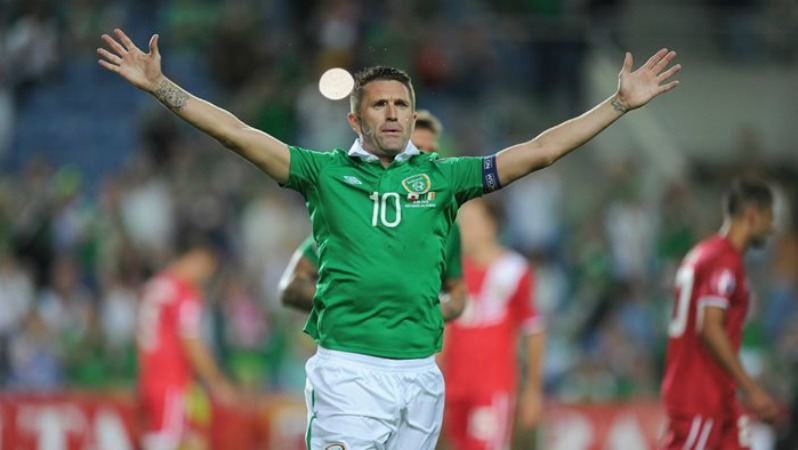 This discrepancy in goal scoring rates can be attributed to a large competitive gap in women’s soccer. While men’s national team programs are often well estasblished across the globe, some countries neglect their women’s programs, leaving them under-resourced and disadvantaged. Some women’s programs newer and less established than other countries’. Some women’s programs have no professional players because there is no domestic professional women’s league, so they field amateurs. Whatever the reason, the top 10 or 15 women’s national team programs in the world routinely dominate lesser ones. It is normal for a team in one of these programs to have a year filled with several competitive results against good teams (1-0, 2-2, 3-2, etc) and many blowouts against bad teams (5-0, 6-0, 10-1, etc).

Goal scorers on these good teams benefit from these blowouts, often throughout their entire careers. Players don’t change teams nearly as often. A lesser country can’t simply go out, buy the best talent, and all of the sudden compete with the best teams in the world. Consequently, those aforementioned best 10 to 15 women’s teams in the world can remain so for a decade or more. That’s a lot of time for the established stars on those teams to rack up goals.

Furthermore, female mainstays on national teams tend to earn far more caps than their male counterparts. If we look at the most capped active men’s and women’s players, the top 10 women have earned 2,056 caps while the top 10 men only have 1,428. There are 17 women who have earned 200 or more caps throughout history, and 2, Christie Rampone and Kristine Lilly, have earned more than 300. The most capped active male player today is Iker Casillas with 165, and no man has ever earned more than Ahmed Hassan’s 184.

The highest scoring man in international soccer history, Iran’s Ali Daei, retired in 2006 at the age of 36 with 109 goals. He arguably also benefitted of playing against lesser competition in the Asian Football Confederation, and his high scoring rate of 0.72 goals per game speaks to that, but he had only earned 149 caps by the time he was 36 (Wambach was 30 when she earned her 149th cap). Daei simply didn’t play enough international games throughout his career to come close to Wambach’s record. 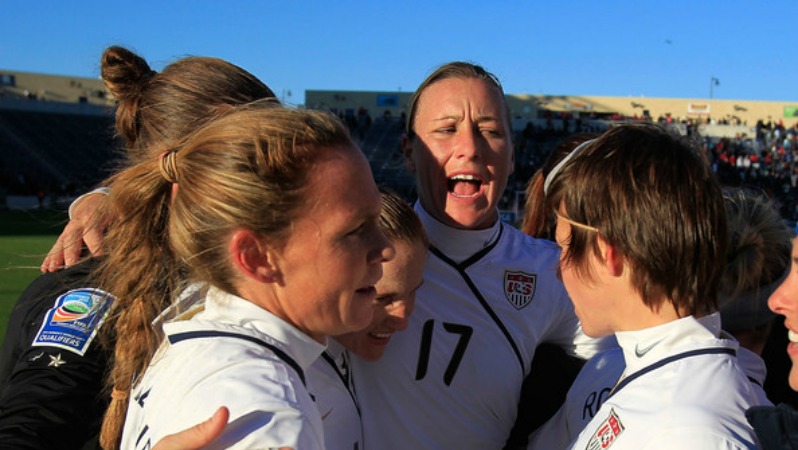 The effect of all the extra caps on team chemistry is worth more exploration, though it would be hard to quantify.

The combination of playing fewer games and scoring at relatively low rates makes it incredibly hard for any man alive today to break Wambach’s record. Simply put, unless one of them manages to increase his scoring rate by an absurd amount, or manages to have an absurdly long international career, no active male player will break it. The international scoring record belongs to women and women alone.

It would be easy to get caught up in the debate of men vs women right now, but that’s not the point of all of this. It doesn’t matter if men score at a lower rate because they face stiffer competition. It doesn’t matter that Abby Wambach played 90 more games than the highest capped male player alive. Her team did not write a good scoring rate into her contract. US Soccer didn’t donate a bunch of national team caps to her career. She had to score each goal, she had to earn each cap, and the fact that she did so is what is worth paying attention to.

This record reflects the greatness of Abby Wambach’s place in history, nothing else. We may look back on Wambach’s, or Sinclair's, or some other women's international scoring record in 50 years much the same way we look at Pele’s 1281 career goals. He too scored when there was a large competitive gap (although it was there for different reasons). He too took advantage of lesser teams and a ludicrously long career by today’s standards (21 years). But he is still known as one of the greatest players of all time because of what he accomplished at that moment in history. Great players don’t choose the time they play in, they do whatever it takes to be great at that point in time.