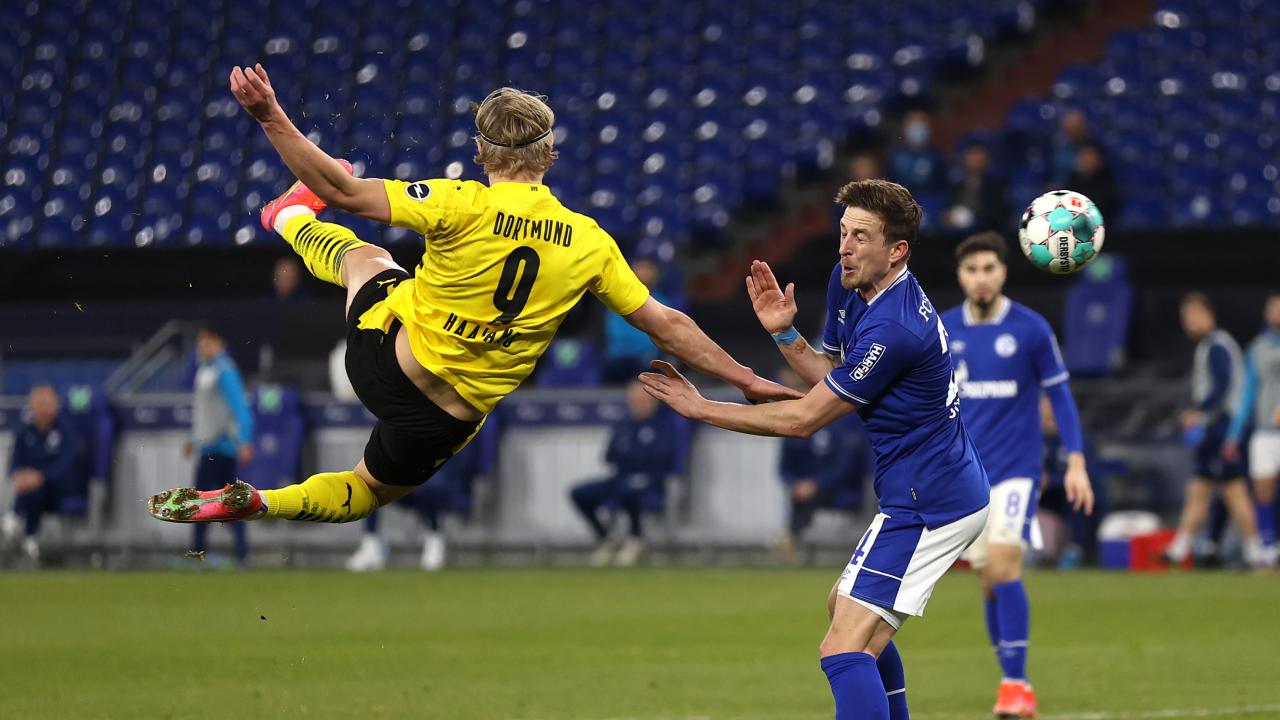 There is something special about what Erling Haaland is doing right now.

The 20-year-old Norwegian striker is scoring at a remarkable rate, with 27 goals across all competitions. That’s more than Cristiano Ronaldo, Lionel Messi, Mo Salah and Kylian Mbappé. Only Robert Lewandowski (31) has scored more from Europe’s top leagues this season. Borussia Dortmund’s young star has an incredible knack of both getting into the right positions to score easy goals and converting from tough positions. Entering Saturday, he had scored seven more than his Expected Goals tally would suggest.

What Haaland did on Saturday was another reminder of the young man’s undeniable class in front of goal, a stunning volley in the Revierderby against Schalke.

Dortmund won its first Bundesliga match since January by dispatching its rival 4-0 at the Veltins-Arena on Saturday thanks to two strikes from Haaland, the first a must-watch goal.

Jadon Sancho opened the scoring with a great finish following a Schalke giveaway to become the youngest player (20 years old) to reach 35 Bundesliga goals. He then set up Haaland’s beauty moments later for a 1-2 knockout blow at the end of the first half.

Three minutes after giving his side the lead, Sancho found Haaland in the box with a lobbed pass. What Haaland did next belongs on the cover of FIFA 22.

To generate that sort of power while being perpendicular to the ground and after taking a half-step back from goal is nothing short of astonishing. Credit must also be given to Sancho for the superb pass to create the goal.

Dortmund’s third came in the 60th minute through Raphaël Guerreiro following a nice piece of combination play with Marco Reus, who was influential throughout the match. (See the full highlights below.)

Haaland added a second in the 79th minute to cap the blowout. Dortmund’s young Englishmen linked up on the right wing before Jude Bellingham set up a tap-in that was almost too easy for Haaland.

Haaland now has 17 goals in 17 Bundesliga matches. Add to that eight Champions League goals (in five appearances) and one each in the DFB-Pokal and DFL-Supercup, the 20-year-old’s tally is 27 from 25. In all, Haaland has 43 goals in 43 games in all competitions since arriving at Dortmund from RB Salzburg just over a year ago.

For our obligatory American watch, Matthew Hoppe started and played 66 minutes for Schalke, failing to convert a chance that could have made it 2-1. Gio Reyna came on to stretch his legs for the final 10 minutes with the game already in hand.

Here are the full-match highlights from the Revierderby, including another look at that Haaland volley vs Schalke.