Two Generations, One Team: Quotes From Two Of America's Best

March 18, 2022 National Peanut Board Brand Publisher
Landon Donovan and Jordan Morris discuss the past, present and future of the USMNT.

The United States soccer team finds itself at the beginning of a bright new era.

The squad is young, hungry and ready to make its mark on the world’s stage, but the emerging generation knows it’s standing on the shoulders of those who came before them and helped establish the U.S. as a global force.

Landon Donovan — widely recognized as the best male U.S. soccer player of all time — is a legend of the American game, while Jordan Morris — winner of the Hermann Trophy (top college player) and MLS Rookie of the Year — is viewed as a difference maker for years to come.

As the official sponsor of teamwork, the National Peanut Board sat down with both players to discuss their childhood beginnings, professional careers and the ingredients that fuel championship winning teams.

Jordan Morris (JM):  "Playing with my dad and my brother in the backyard. My brother was a big inspiration to me. I think whatever sport he went into, I would've gone into. Very thankful he decided to go into soccer, so I followed him."

Landon Donovan (LD):  "When I was five or six I played on my first AYSO recreational team and my best friend, who lived across the street, also played, but he played on another team. I remember I got in trouble at school one week, and my mom said I couldn't play the game that weekend and we were playing my best friend's team. It was the one game I was looking forward to all year.

“Not only did she not let me play, she took me to the field and made me sit and watch. It actually gives me goosebumps thinking about it because any time I got benched as a pro, or didn't get to play, or I had to sit and watch, it triggered that for me. I'd be like, 'I'm never ever sitting on the bench again,' and it would just motivate me." 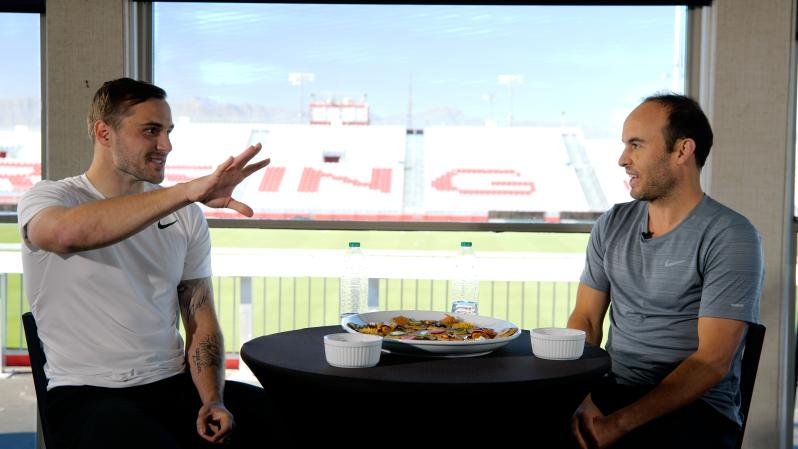 JM: "This guy (Landon), honestly. He was huge, that whole generation — guys that I look up to and would go try to emulate in the backyard. Watching those national team games growing up, watching you guys in the World Cup. Every kid aspires to be playing in the World Cup and wanting to be just like you guys."

LD: "As far as idols go, mine were mostly foreign players because every Christmas or birthday I would get VCR tapes of the thousand greatest goals in Serie A or the Premier League. I would just sit and watch them and there were no Americans on there, unfortunately.”

LD: "I have a different perspective now that I'm coaching. As a coach, what you're looking for is as much consistency as possible. If I'm your coach, I want to know what to expect from you every day. I know that there are going to be days when you're really good, and I want to know what does your worst day look like? If you can't consistently show up and perform every day, it's hard for me to trust you as a coach."

IMPORTANCE OF DIET AND ROUTINE

LD : "It's interesting for me now as a coach of players who are not at the highest level in this country and trying to help them understand the value of treating their bodies right. They don't always see it, but what I try to explain is the margins are not big. The difference between a USL player and an MLS player is not as big as they make it in their mind.

"They're little, small margins, and that can be one of the things that helps push you over the edge. It's challenging because when you're breaking habits that have been around for years, and maybe decades, for some people, it's challenging, and it's difficult."

JM: "I know this isn't necessarily relatable for a lot of people, but I'm a diabetic. Since I was nine, I was really thinking about food, it's something that I really had to take seriously, and understand how it's going to affect my body. I think learning about that at such a young age, I think it has been beneficial for me coming up because your diet is so important as a pro. I've really tried to get into a routine of what I eat because I know that I'm going to feel this the next day, I'm going to feel fit and sharp the next day."

LD: "I like peanut butter on wheat bread with bananas and honey."

JM: "I like peanut butter with yogurt and granola. Kind of my nightly routine."

HOW THE USMNT USES PEANUT BUTTER TO ESTABLISH HEALTHY ROUTINES

LD: "We'd have a heavier meal. Whatever the hot food is, but 70, 80% of the guys, after the meal grab a piece of bread, peanut butter. Whether they want peanut butter and jelly, peanut butter and honey, bananas. It's just a snack where, as a professional athlete, you're burning so many carbs. Two hours after the meal you're like, 'I need something,' and you have it there, and you just eat it, or you grab a banana with some peanut butter in the training room. Now that I'm actually thinking about it, it's more critical probably than I ever realized.”

JM: "It's a staple. Every night at dinner there's the granola, fruit and peanut butter station, and everyone goes and grabs some of that after dinner, because like you said, you're on the field training, working so hard. You're burning so many calories and so much energy. To replenish that, peanut butter's a great food for that and also fills you up, keep you full, throughout the night and it's a great food for my blood sugar. It keeps everything really stable and I know that when I eat it I'm going to feel good afterwards." 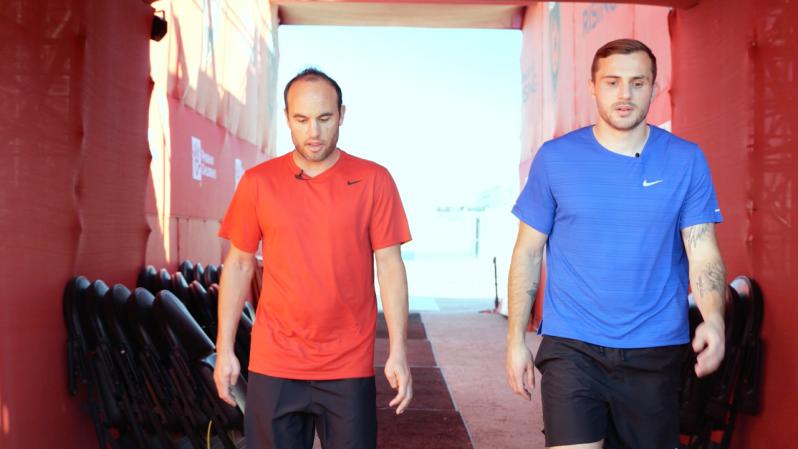 JM: "I've been fortunate enough to be a part of some great teams and some teams that ended up winning some championships. I think the underlying thing in that is that we were just a great team on and off the field and in the locker room. You just felt so connected to the guy next to you and you'd got out and battle for them."

LD: "Soccer is unique in that all those interactions are amplified, because in basketball almost every time you come down the floor you have some set or some play or type of play. Football, for sure, you snap the ball, five-yard out, whatever. Everybody's got these defined roles.

“In soccer, it's so much more instinctive, so there's a real human connection that happens that you can't manufacture, you can't fake, and if you care about the guy genuinely, and you're willing to help him when he makes mistakes and vice versa, and 11 guys like that come together, plus other guys in training. That's when you get teams that win championships from my experience, and that's why soccer's so unique.

"Then when you see a play come together like that with 11 other guys trying to ruin it, plus an environment, plus the crowd, plus the referees, plus all that. That's why people celebrate the way they do when soccer players score because there's this thing that happens that's so special, that's unique to our sport. Those things are hard to manufacture as human beings, if there's a real connection on the field, off the field, you see that come out on the field and that's what good teammates do, and that's what the best teams do."

JM: "It's just an incredible honor. I remember the first time I put on the jersey and listened to the national anthem, and it just all felt so surreal. Because it's what you grew up as a kid wanting to do, to represent your country and play for the national team."

IDENTITY OF THE U.S. SQUAD

JM: "I think this is a testament to the coaching staff — they have established a clear identity of how they want to play, and so no matter where you come from, where you're playing with your club team, whatever, when you come into camp, and when you come to be a part of the team, you buy into your role and understand what your role is within the team.”

LD: "That's taken time to get right because when you're in a club environment, you get to practice every day. When you come into a national team, you're together for three days or five day or a couple of weeks but that's really hard. In the beginning there were some major hurdles to get over. Now you're seeing the team really understand what the identity is. That's been fun to watch."

JM: "I think everyone knows, especially not going to the last World Cup, how important this year is to qualify and get to Qatar. I think that's everything. When we go into these camps, the whole focus is getting ready to try and be part of that qualifying group at the end of the month and qualify for the World Cup because again, I think everyone knows how the last qualifying cycle went and the disappointment that obviously comes with that."

LD: "What we also have to remember is the group of players who are in now are really young and inexperienced in qualifying. It's just the reality. I think what they've done so far has been phenomenal. It's weird, we have this expectation that the U.S. should be this, should be this, should be this. There's a lot of 18, 19, 20, 22-year-old kids who have never been through this, but they’re in a great position.”

LD: "The beginning of my career, I would have said scoring in a World Cup, playing in my first World Cup match, things like that. At the end of my career, the moments that resonated the most were of winning championships. Celebrating with a group of 20, 25 players, plus a bunch of staff who were together for a year that made something happen is so unique."

JM: "As I've gotten older, all I want to do is win. Win championships with my team, so I think that those moments, like you said, are incredibly special. Just the amount of work you put in, and I think it all goes back to teamwork."