Connor Fleming July 14, 2022
Minnesota Aurora is only getting started.

On Wednesday night at TCO Stadium in Eagan, Minnesota Aurora — the state's fledgling, community-owned women's soccer team — made history with a record crowd of 6,200 inside the ground for a USL W League playoff quarterfinal against Indy Eleven.

TCO is the usual practice facility of the Minnesota Vikings and draws big crowds there for training camp, but not even the Vikings have ever drawn this many to the state-of-the-art performance center that opened in 2018.

Aurora actually wasn't too far behind Major League Soccer's lowest attendance Wednesday night — 10,027 at DRV PNK Stadium for Inter Miami vs. Philadelphia — and it's worth noting that just 10 miles to the north, Minnesota United announced a crowd of 19,657 at Allianz Field for a visit from Sporting Kansas City.

It's a very affordable ticket ($14.30) with the seating plan almost entirely general admission. The large concourses and a grassy knoll behind one goal add to the family-friendly atmosphere, and there's plenty of great vantage points for those who'd prefer to stand along the outer rail. For those who enjoy a more active experience, there's the MN Revontulet supporters group banging drums, blowing horns and waving flags. 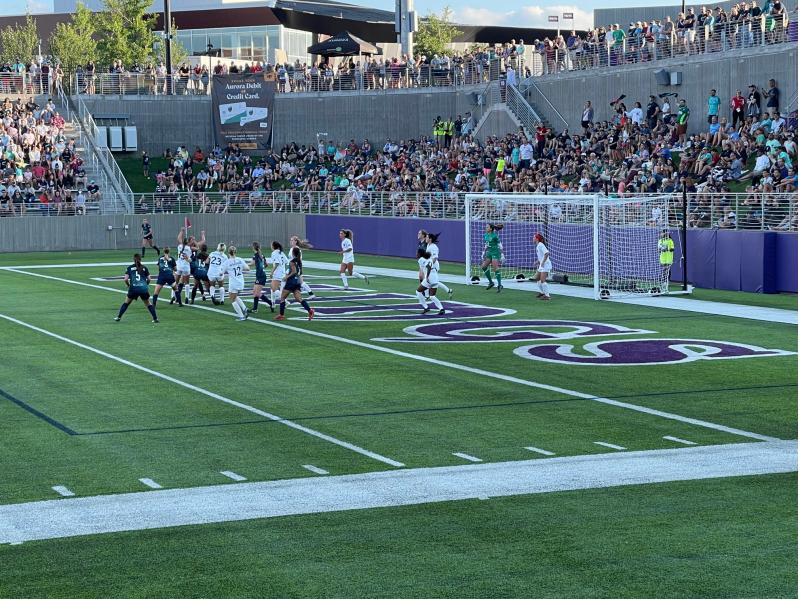 The atmosphere on the pitch really picked up in the 25th-minute, when the team's most recognizable player was called into action.

Goalkeeper Sarah Fuller — who made history in 2020 by becoming the first woman to play and score in a Power 5 college football game — was asked to keep things scoreless after Indy Eleven earned a penalty for a clear handball.

Fuller pushed the attempt wide and the crowd began chanting her name.

Indy Eleven got the opener before the halftime, but Minnesota responded in the 50th-minute with a 20-yard screamer from former DePaul Blue Demons standout Morgan Turner.

The game-winner for Aurora arrived from the penalty spot in the 66th minute. Mayu Inokawa might've set a record for the longest approach ever.

After drawing its inaugural match, Minnesota has now rattled off 12 straight wins to reach the USL W League semifinals. Aurora hosts McLean Soccer on Sunday at 5 p.m. CT while Greenville Liberty welcomes Tormenta FC that same day in the other semi.