Argentina vs. France: Who will win the World Cup final? 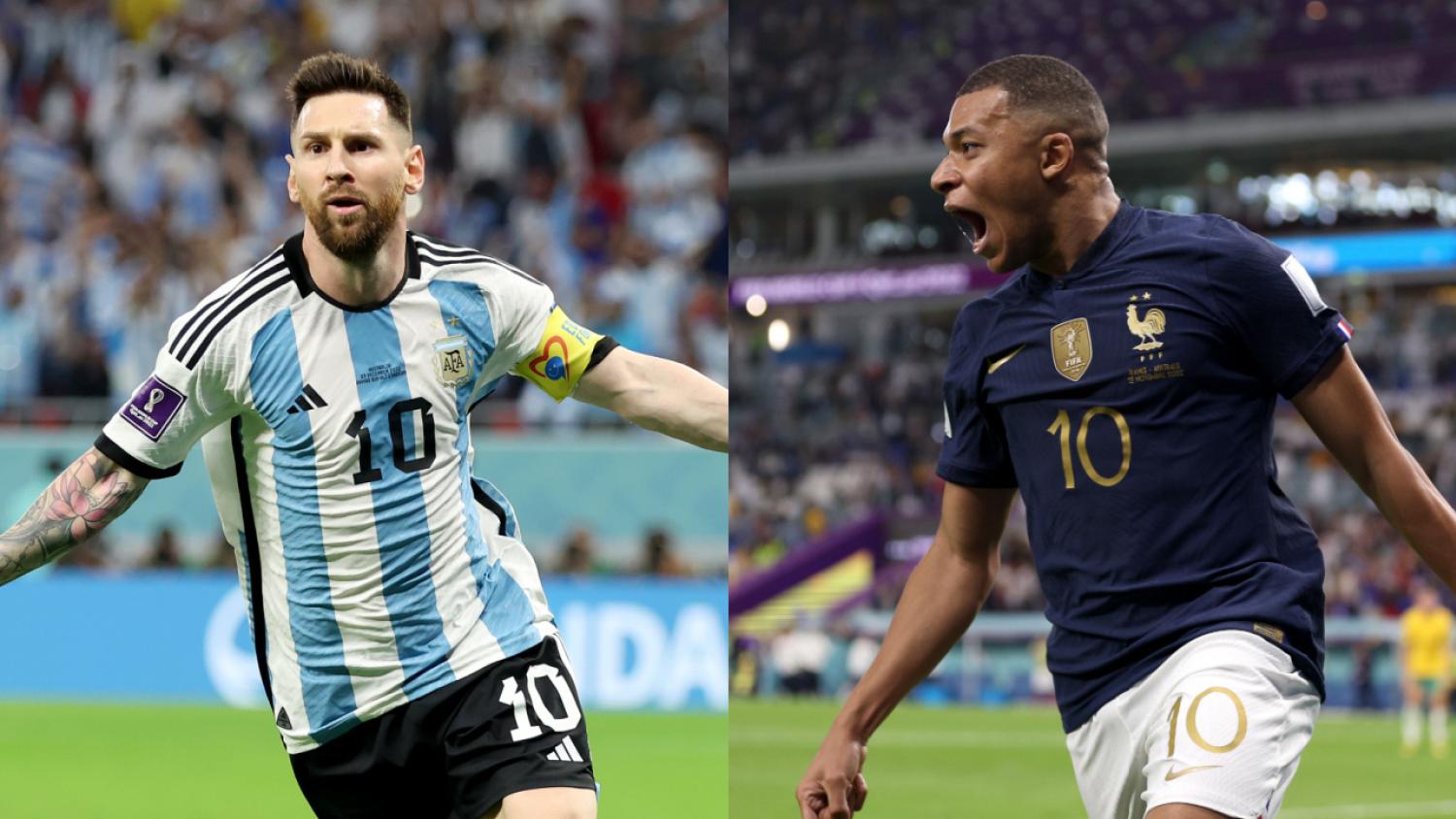 France is currently favored but it's really too close to call.
Getty Images

The stage is set. The 2022 FIFA World Cup Final will be a clash of titans — Lionel Messi and Argentina battling Kylian Mbappé and France with both nations going for a third title. Only Brazil (five), Germany and Italy (both four) have won it more.

France, the defending world champions, have a lethal mixture of know-how and individual brilliance, but Argentina, South American champs, have Messi and a supporting cast ready to run through walls for their beloved captain.

The world stops on Sunday to watch the greatest game in all of sports with kick-off in the United States at 10 a.m. ET on FOX and Telemundo. Here are the latest odds, team previews for both nations and a prediction. Check out DraftKings for more info and ways to enjoy the game.

Recent past meetings: France and Argentina famously met at the 2018 World Cup Round of 16 in a seven-goal thriller. Les Bleus took an early lead but Argentina had a 2-1 advantage in the 48th minute. France's Benjamin Pavard then scored one of the tournament's best goals before Mbappé took over with two quick strikes. Sergio Agüero pulled one back late for La Albiceleste, but France moved forward en route to the title and Argentina faced a national inquest back home.

Question marks: After being suspended for the semifinal, Acuña likely returns at left back over Nicolás Tagliafico. Argentina could also play with five at the back, meaning Paredes would drop out and Lisandro Martínez would enter. How will Ángel Di María be used now that he's recovered from a thigh injury?

At the age of 35, the seven-time Ballon d'Or winner is at his very best. Messi is both the tournament's co-leader in goals scored with five and assists with three, so he's had a direct hand in 66% of Argentina's strikes. His dribbling (2.5 successful take-ons per game) has been mesmerizing, and defenders have simply turned to hacking Messi as he's drawn 3.3 fouls per game.

The stats illustrate his genius, but really you just need to watch him play.

by far the best video i’ve ever taken #messi pic.twitter.com/vJglh088Dr

After disappointing performances from strikers at the last two World Cups, Messi and Argentina have finally found a dependable forward with Álvarez scoring four goals so far, including two against Croatia in the semifinals.

The first, which Álvarez converted after taking possession inside his own half, had an element of good fortune to it, but it also illustrated how Argentina is creating its own luck this tournament by taking the game to opponents.

Argentina's midfield at the 2018 World Cup was a disaster-class in unbalanced play. At that point in time, De Paul was a 24-year-old playing for Udinese and without an international cap.

Four years later, De Paul has 50 appearances and Argentina's midfield is supremely balanced with De Paul providing the snarl, Enzo Fernández the guile and Alexis Mac Allister a little bit of both.

The opening defeat to Saudi Arabia led to lasting changes in the starting XI, but the Green Falcons' game plan is one that France has mastered to perfection. Les Bleus let England have nearly 60% possession and then diced them going the other way by unleashing their individual talent. Against Morocco, France yielded even more of the ball but created clear opportunities when they sprang forward.

France doesn't have a fanatical press, but they invite you into areas with cold calculation and make you pay dearly. Argentina could play into this.

Question marks: Upamecano and Rabiot dropped out of the starting lineup against Morocco because of illness. Will they be fully recovered for the final?

After scoring five goals and providing two assists in France's first four games, Mbappé didn't make any direct contributions in the quarterfinals or semifinals. However, after a subdued game against England, the 23-year-old menaced Morocco and created the danger that led to both France goals.

He left a terrifying impression on Argentina four years ago, and it'll be difficult for the South Americans to exorcise those demons once they see Mbappé flying down the wing again.

Mbappé is just unfair out there pic.twitter.com/uxkrZVswgq

The 22-year-old represents the future of the midfield for both France and Real Madrid, but he's having his moment right now. Tchouaméni has been faultless in shielding France's backline and allowing Mbappé-Griezmann-Dembélé the license to do as they please, but he also scored a long-range missile against England in the quarters.

GOAL OF THE DAY: Aurélien Tchouaméni scored from outside the box to give France a 1-0 lead over England. ⚽️ pic.twitter.com/m86vaFfYbu

Against Morocco in the semis, France really had to rely on Tchouaméni with midfield partner Rabiot ruled out, and the young man was imperious once again.

There was one play in the first half when Mbappé couldn't finish his excellently weighted through ball, and then Tchouaméni teed up Giroud for an even easier finish. No dice.

One of those players that might not be a 10/10 at anything, but he's probably a 9/10 at everything. Griezmann is a rare breed, maybe best exemplified by how he can play for both Atlético Madrid and Barcelona. And when he plays for France, he combines all the elements to perfection — rhythm, vision, tenacity, discipline — to make contributions in every area of the pitch.

Griezmann hasn't scored in Qatar, but he has three assists and his delivery on set pieces is always dangerous.

France finally kept its first clean sheet of the tournament against Morocco, but the Atlas Lions didn't encounter a steel trap out there. France's bend-but-don't-break strategy is risky business that could be severely punished by good finishing.

France clearly created the better chances, but it took a lot of great penalty area defending not to concede a few the other way pic.twitter.com/Ggyy3WfDPu

Let's have it. A five-goal World Cup final with Argentina winning it in extra time.