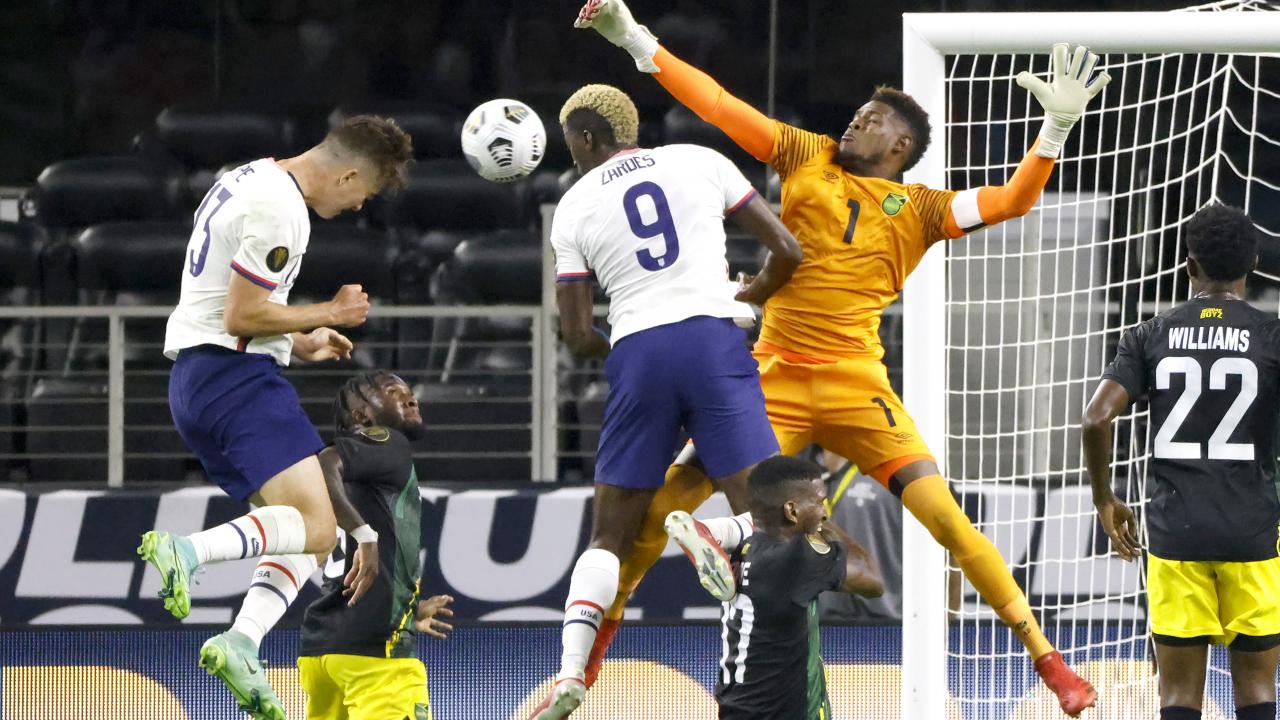 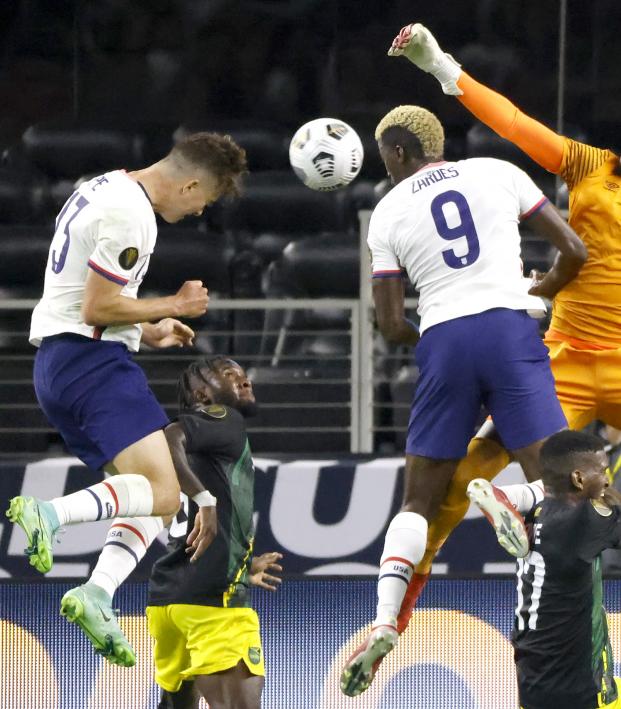 When it comes to attack-minded players, the USMNT has never been more exciting. Christian Pulisic, Gio Reyna, Weston McKennie, Brenden Aaronson and Konrad de la Fuente are all footballers that bring you to your feet when in possession around goal, but they all share two common traits: (1) they’re not strikers and (2) they’re young.

These are important points because now we’re going to move on to talking about USMNT strikers who, for the most part, are all also fledglings.

That’s part of the problem for the U.S. at the moment because the striker position is perhaps the most difficult role in modern football for young professionals. There are a number of reasons for that, but they largely hinge on tactical understanding and consistency.

Forwards are no longer deployed to score goals and little else, especially in Gregg Berhalter's 4-3-3 system. They now need to be the first line of defense in the press, as well as savvy enough in possession to elevate the play of the attackers around them.

And of course no position demands consistency (goalkeeper excluded) like the center forward. Young forwards frequently find themselves out on the wing because the burden of leading the line and converting chances is less pronounced there. At the highest level, strikers have to come through game after game, which is why they make the most money and command the highest transfer fees.

This is the current situation for a number of talented U.S. forwards (including Matthew Hoppe, Timothy Weah and Nico Gioacchini), and also the reason why the experience of players like Gyasi Zardes and Jozy Altidore counts for more than Twitter users would like.

It’s been a whirlwind start to the club season for Sargent, who began it in the 2. Bundesliga with relegated Werder Bremen and scored two lovely goals in a 3-2 win over Düsseldorf back on July 31.

The first was an impressive piece of control followed by a pinpoint half-volley, and the second was a towering header.

Nine days later, Sargent moved to Premier League side Norwich City for a reported fee of over $11 million. The 21-year-old was handed a four-year contract and — just five days later — was thrown into the mix against Liverpool. Sargent only got 13 minutes, but it’s clear that the club hopes he’ll prove Teemu Pukki’s longterm successor at the striker position. Manager Daniel Farke recently said as much.

“There was lots of competition to sign Josh,” Farke said. “Perhaps he is not the biggest name in England but in the Bundesliga nearly each club was thinking about him. It’s up to us to work with him, and then for him to prove he can deliver on the top level.

“He has pace, he is good in the air, he works his socks off and he’s also capable not just to play in the striker role but behind the striker and on the wing. He is a great character. His English is perfect so the language isn’t a problem — maybe apart from the Scottish players because he’s struggling to understand them already and reckons they don’t speak English. He ticked many boxes and we have big hopes he can develop and have a major impact.”

Very little was known about the 25-year-old striker heading into the summer — so much so that the variations on his full name of “Theoson-Jordan Siebatcheu Pefok” went every which way.

Coming off a breakthrough season with Swiss giant Young Boys, Pefok made his name properly known by scoring the game-winner against Honduras in the Nations League semifinals.

He’s carried that form into the new season, scoring two goals and providing one assist in three Super League appearances, but Pefok’s real noise has come in Champions League qualifying. Against Slovan Bratislava in the second round, Pefok had a goal and an assist in the 3-2 aggregate victory. Against CFR Cluj in the second round, he scored a second leg brace to propel Young Boys to a 4-2 aggregate victory.

The second — a curling first-time effort from the top of the box — was clutch as hell.

Next Match: Wednesday, Aug. 17 vs. Ferencváros in the Champions League playoff

Dike could seemingly do no wrong between his Barnsley loan spell, a friendly goal against Costa Rica, a successful return to Orlando City and two goals against Martinique in the Gold Cup, but the business end of that tournament saw the 21-year-old’s stock take its first hit.

Handed starts against Canada, Jamaica and Qatar, Dike failed to make his usual impact, although he did suffer a shoulder injury early in the tournament that seemed to linger through it all. In the final against Mexico, Berhalter trusted Gyasi Zardes for all 120 minutes and Dike never got off the bench.

I found it incredibly strange how quick many were to declare that “Daryl Dike has tumbled down my USMNT depth chart!” but you need to provide takes when your a soccer blogger hack person, and saying that statement was a circle-jerk approved message across the U.S. soccer sphere by the end of the Gold Cup.

Dike hasn’t returned to the lineup for Orlando City yet, but manager Óscar Pareja believes he’ll be at his best.

“Daryl has learned from all those things,” Pareja said. “We need to manage it well because all that has happened with him in the past six months, it helps for him to keep growing.”

He makes it FOUR for the @USMNT pic.twitter.com/9vBOsHiwd7

There are still rumors of a transfer this summer, and the latest club linked is West Brom. It’d be hard to envision a Championship club meeting Orlando’s asking price, but the Baggies are owned by Chinese billionaire Lai Guochuan.

After scoring the game-winner against Qatar and leading the line against Mexico, I’d be willing to go a round of shin kicking with whoever wants to talk trash about the second fastest USMNT player to reach double-digit goals and assists.

But we always know what we’re getting with the 29-year-old after 62 caps, and it’s not exactly “this is how we reach the World Cup quarterfinals.”

Zardes has made three appearances for Columbus since the Gold Cup, failing to score, assist or land a shot on target while the Crew have lost all three. Again, not the most exciting stuff.

Hoppe’s first senior season with Schalke had everything you’d expect from a hugely talented teenager making his Bundesliga breakthrough. That hat-trick against Hoffenheim to end Schalke’s historic winless streak is already the stuff of legend, and then he followed that with goals against Frankfurt and Cologne to put Germany and America on notice.

He then went 13 games without a goal or assist — understandable for a kid who just turned 20 last March — but he finished the campaign with a goal and assist against Frankfurt before turning in some memorable performances at the Gold Cup, despite being stationed out on the wing.

His game-winner against Jamaica was the only goal, but Hoppe’s ability to bring both the snarl and the sauce (two attributes that the U.S. desperately needed) earned him comparisons with one Clint Dempsey.

Obviously - in terms of on-field output - those comparisons end immediately, but Hoppe is the sort of character that you absolutely love to have in your team and loathe to play against.

According to the latest rumors, Newcastle, Wolves, Everton and Brentford are all attempting to sign Hoppe before the close of the transfer window. The American has yet to play for Schalke in the 2. Bundesliga, but he’s back in training.

⚽ @MatthewHoppe9 has rejoined training and will take part in an individual session today. #S04 pic.twitter.com/V5nXfrywlP

Up Next: Saturday, Aug. 21 vs. Jahn Regensburg

Is Weah really a center forward? According to Transfermarkt’s breakdown of the 2020-21 season, the 21-year-old scored three goals and provided one assist in 16 games on the wing, whereas he contributed two goals in 20 as a center forward.

But the vast majority of those center forward games came when paired with striker Burak Yılmaz. The 36-year-old got the goals (16 in 28 Ligue 1 games), while Weah provided the running. That doesn't really fit Berhalter's system.

After scoring on his return following a two-month enforced absence from Toronto’s squad, Altidore has gone five matches without a goal, assist or shot on target. Against NYCFC on Aug. 7, both Alitdore and Michael Bradley were hooked at halftime with Toronto losing 2-0, a move that proved the catalyst for salvaging a 2-2 draw in the second half.

Altidore was then out of the squad against New England on Aug. 14 “due to a previously unannounced injury.”

If he was scoring goals and staying healthy he’d skyrocket up this list — he had an unmatched skill-set in the U.S. striker pool — but it’s been so long since he's shown it that “had” is the appropriate word choice.

The 21-year-old can play center forward, right wing, left wing and even a bit of attacking mid, and he made his mark off the bench at the Gold Cup by scoring against Martinique and providing the assist on Zardes’ Qatar winner.

After scoring four goals in Ligue 2 last season, the 21-year-old Kansas City native hasn’t returned to action for Caen’s senior side yet, although he went the full 90 for Caen B in a fourth-tier match against Vannes last Saturday.

He’s not ready to lead the line, but he should certainly continue to see action on the wing.

Now on loan at Porto B from Norwich City, Soto was on fire last fall when scoring seven goals in 12 appearances for Telstar and hitting a brace for the USMNT in a friendly against Panama, but the 21-year-old has gone quiet over the last eight months.

Still, Porto’s never a bad place to be.

Next Match: Sunday, Aug. 22 vs. Marítimo