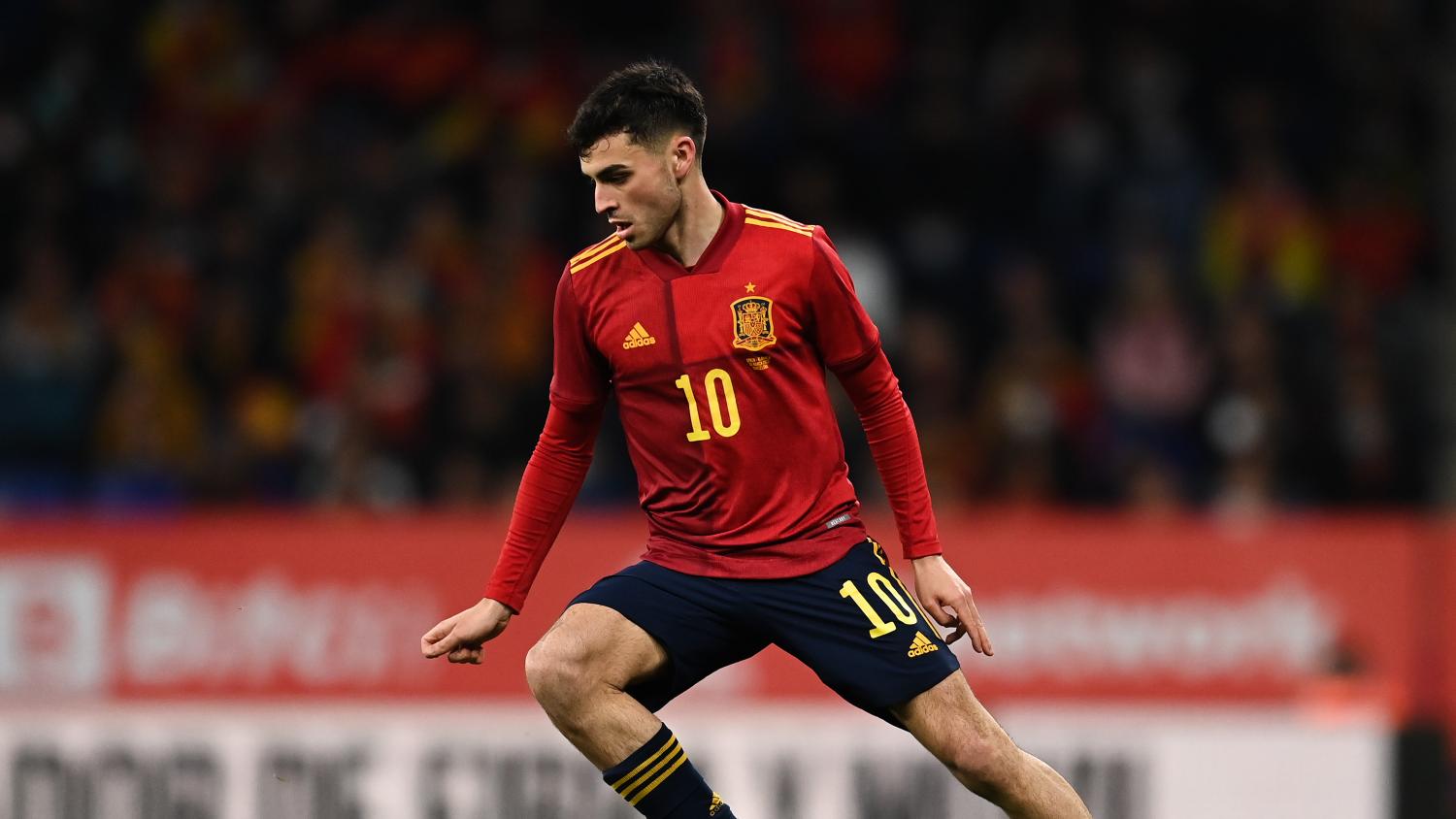 6 from LaLiga, two Lions, one Juventus player and another from Concacaf.
Getty Images

Youngsters and World Cups are two things that have historically got along.

From Pele in 1958 to Mbappe in 2018, young players have taken the world by storm in this tournament.

Over the last couple of years, we've been introduced to insane talents that dazzled on the biggest stage.

Hence, we feel it is important to list and rank the best young players playing at this year's World Cup.

The Brazilian had an amazing season with Madrid – winning LaLiga, Spanish Supercup and the UEFA Champions League and scoring nine goals and providing 10 assists.

Rodrygo was crucial in getting his team to the Champions League final, igniting the iconic comebacks against Chelsea and Manchester City where he scored a combined three goals in both games.

"So big that he doesn't fit in the picture."

He is Mr. Champions League Jr.!

Although Brazil has plenty of alternatives on the flanks, the 21-year-old is perhaps the most clutch player on the squad. Add his superb technique and finishing skills, he's a player anyone would want at their disposal.

Like his compatriot and club teammate Vinícius Junior, Rodrygo will be looking to bring the golden trophy back home for the sixth time.

Dušan is a killer.

The Serbian came onto the scene after absolutely bullying opponents in Serie A with Fiorentina. With the Lilies, Vlahović scored 49 goals and provided eight assists in 108 games.

In the season where he was snatched by Juventus as a response to Cristiano Ronaldo’s abrupt summer exit back to Manchester United, the striker had tallied 17 goals and four assists in 21 games for the Viola.

A record breaking 2021 for Dusan #Vlahovic

If he would have stayed with the Fiore that season, Vlahović's chances of competing for the European Golden Boot would have been high.

Although he’s had a “slow” start at Juventus, the Serbian has shown that he can be one of Europe’s most lethal strikers for club and country.

With Serbia, the striker has scored 7 goals and provided three assists in 14 games and in 732 minutes – a goal contribution every 73 minutes.

He’s gonna score in Qatar. Count on that.

The newest and final piece to rejuvenating a legendary Madrid midfield.

Aurélien was Real Madrid’s first summer acquisition, buying him from AS Monaco for a deal potentially worth $100 million – the most expensive transfer this summer.

Well, Tchouaméni is one of those players that is unpredictable in the sense of what he will be able to contribute throughout a soccer game.

Although he has the characteristics and attributes of a defensive and tough central midfielder, the Frenchman can also provide in the attack and create chances in the last third – all reasons for Didier Deschamps to consider him a regular in the French national team.

With Les Blues, Tchouaméni has become a starter and will most likely be one in the 2022 World Cup.

Jude Bellingham is so great he already retired a number.

At 17, the midfielder was one of England’s most exciting talents – present and future.

After having impressive performances with Birmingham City in the English Championship, Bellingham earned himself a transfer to Borussia Dortmund, breaking the transfer record for Birmingham all while being a kid.

At Dortmund, the midfielder has played 91 games and has scored 11 goals and provided 19 assists – with a goal contribution in every competition he’s played in.

There’s been rumors about a potential move to another European giant, and if he’s able to showcase his talent at the world’s biggest stage, Bellingham might solidify his position in world football, bag another transfer and retire yet another jersey number somewhere else.

Although he’s had injuries that have kept him sidelined for quite some time in the last two seasons, Ansu Fati is still the definition of a baller.

Fati’s capability to create and contribute goals with such ease is mesmerizing.

In the 2019-20 LaLiga season (his debut campaign), the Spaniard scored his first goal for Barcelona when he was 16. At the end of the same season, the winger bagged seven goals and provided one assist in 24 matches and 1,024 minutes played – a goal or assist every 128 minutes as a 17-year-old playing for Barcelona.

Seven minutes into his first Barcelona start, Ansu Fati already has a goal and an assist.

He could be playing with one leg at the World Cup for all we care, he’d still make the list.

If all goes well leading up to the World Cup starting in November, the Spaniard will most definitely make an impact in Qatar.

He’s the kid from Edmonton.

The Canadian is one of the best full backs in the world and you can attribute most of that to his insane pace and dribbling skills.

Throwback to when he left Nélson Semedo in the dust

Davies was the first player born in 2000 to debut in MLS – a glimpse of what he’d achieve in the future.

Since arriving at Bayern Munich in 2019, the left back has won every trophy possible. And he did that all in one season.

How many trophies was it, @AlphonsoDavies? 6⃣

At 21 and after cruising through every opposition with Bayern, Phonzy helped lead Canada to its first World Cup qualification since 1986.

"Look around, look around you. Look at this, we created this. This didn’t exist before we were here. Look around. I swear I promise you right now, we did this."

It’s disrespectful to be this good, this young and do it all with your shoelaces untied.

Gavi is one of many young Barça players making an impact for the first team and he might be the most impressive.

Ever since he was brought up from La Masia and debuted for the club in 2021, the central midfielder has maintained himself as a starter.

Gavi is technically gifted – using cheeky skills to get past the opposition and project teammates into the last third – but can also hold it down defensively – intercepting, recovering and tracking attackers back when it’s needed.

The Spaniard can play in basically every position past midfield.

He’s been so good for Barcelona that Luis Enrique called him up to the Spanish national team and has been phenomenal.

In June, the 17-year-old became the youngest player to ever score for La Roja.

Gavi has become the youngest player to score for @SeFutbol ! pic.twitter.com/B7CLO1ZJPP

Could you imagine being a starter for Barcelona (your boyhood club) and Spain as a 17-year-old?

We’re pretty sure not even his dad imagined this when he began driving Gavi to first-team practice every morning.

“Phil is the most, most, most talented player I have ever seen in my career as a manager,” said Pep Guardiola in 2019.

Keep in mind Guardiola has managed the likes of Lionel Messi, Andrés Iniesta and Xavi.

Phil is that guy, pal.

Since the financial takeover at Manchester City, it’s become difficult to see youngsters from the academy break and slip through the cracks of $60 million transfers every summer.

Phil Foden, at 20 years of age, was able to become a starter for a squad worth over $1 billion.

With the Citizens, “Ronnie” has 112 goal contributions in 212 matches and he hasn’t even peaked.

The @premierleague Young Player of the Season! #ManCity pic.twitter.com/63g2OStTli

He’s still to make that sort of impact with England, though. But, in light of changing things up from last years Euro defeat, a good season with the Sky Blues may earn the winger an important role with the Three Lions at the World Cup.

That’s if he doesn’t get this atrocious trim again.

So that's where @PhilFoden got his new hair inspiration from. Koka Noodles pic.twitter.com/CcQT1KY9fL

Pedri’s growth since arriving in Barcelona has been astronomical. Since joining Barça from Las Palmas in 2020, the midfielder’s market value has increased by $72.8 million.

At Las Palmas and as a youngster, the midfielder was characterized by his quick thinking and vision going into goal scoring areas of the field.

When Messi was still at Barcelona and the team was at their lowest, Pedri became the Argentinian’s unexpected partner – creating plays like this.

I'll keep on adding GIFs whenever Messi scores goals in 2021. RTs and Likes are appreciated. #GoalNo01 vs @Athletic_en#LaLiga on 6th January/2021.
Assisted by @Pedri. pic.twitter.com/UuLuxYm6R4

Although his short career in Catalunya has been difficult (rebuild and life post-Messi), there’s reason to believe that Pedri will become the leader of the azulgrana’s promising future and new generation.

Oh, and he pulled off this nutmeg:

After having a promising, yet almost embarrassing start at Real Madrid – being meme’d in a compilation of videos that ridiculed his poor decision making and finishing skills – Vini managed to turn it around.

In his first three seasons with Los Blancos, the winger scored 14 goals and had provided 23 assists in 118 games.

Florentino Pérez, president of Real Madrid, was called a fool for buying him.

Though, as we’ve previewed before, Vini was able to do the unprecedented.

Carlo Ancelotti was appointed as manager of Madrid for the 2021-22 season, and the winger decided it was time to turn it up.

Last season and in one season alone, the Brazilian scored 22 goals and gave 20 assists in 52 games, scored in a semi-final against Barcelona and scored the only goal in the Galactico’s Champions League final victory against Liverpool – solidifying not only his regard as perhaps the best young player playing in the upcoming World Cup, but also as one of the best forwards.

Brazil is a heavy contender to take the highly coveted trophy. Their attack – as opposed to the last few World Cups – is bolstered with the flair and magic that we’ve been accustomed to with their previous World Cup winning generations.

Did someone say Jogo Bonito in Qatar?