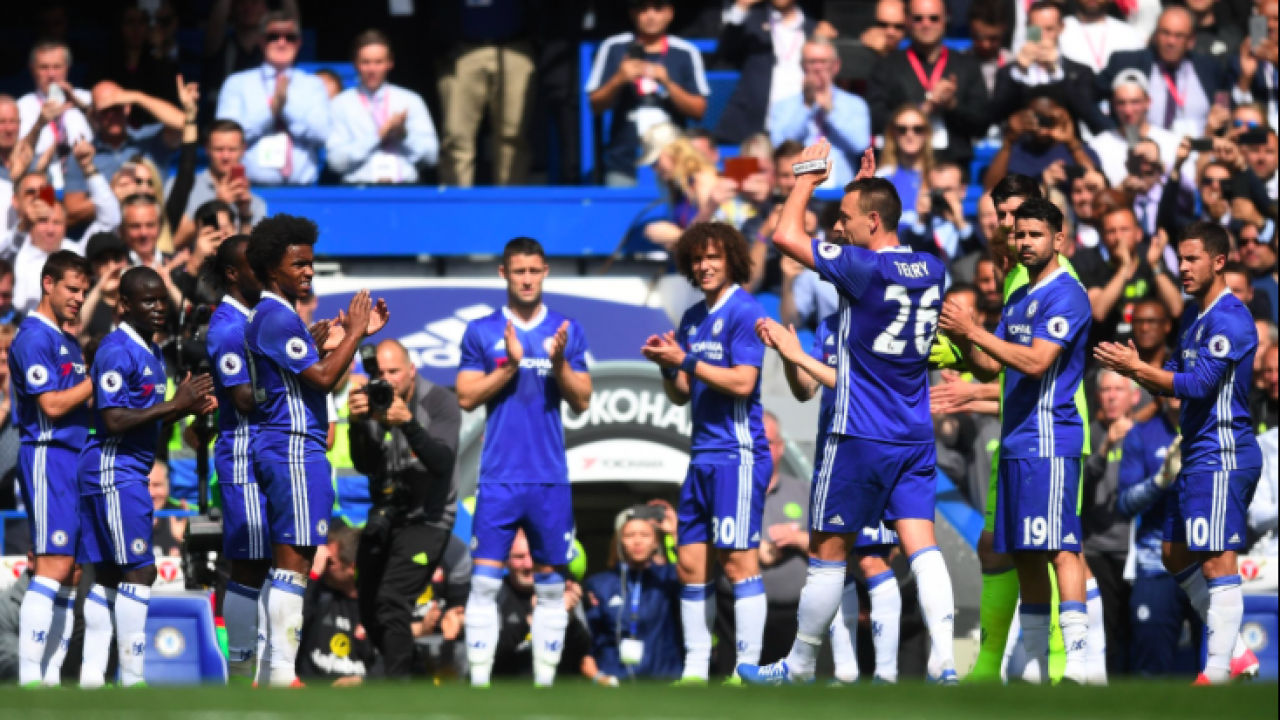 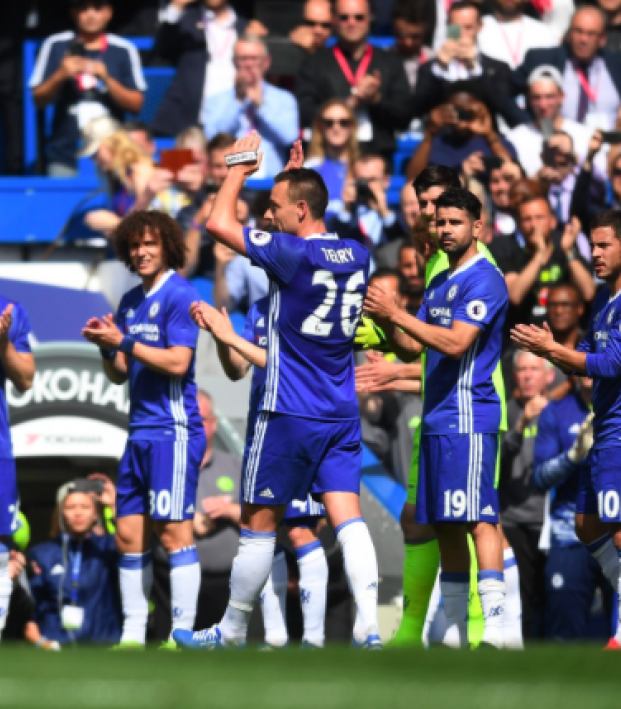 11 Of The Most Hilariously Bizarre Substitutions In Soccer History

When it comes to the heart-stopping, heartfelt and hilarious moments we love about soccer, we tend to focus on what unfolds on the pitch. It follows logic that a substitution -- an activity occurring on the periphery -- would not warrant much more attention than the obligatory clap that comes with one player's exit, another's entrance and some extra time tacked on to the end of the match.

Substitutions, as a necessary part of the game, are mundane and commonplace. However, it's just this matter-of-course expectation that makes the substitution gone awry that much more ridiculous, baffling, amusing and subject to criticism.

Here are a few of the most exciting and eccentric swaps the game has ever witnessed.

The substitution that inspired this list: on May 21, 2017, Chelsea defender John Terry played his last ever match at Stamford Bridge. For a man who has been with the team since he was 14 years old, winning 64% of the trophies the club has EVER won and tirelessly sacrificing his body in the backline for over two decades, it perhaps goes without saying that the tough-nosed skipper deserved praise from players and fans.

John Terry took it upon himself to create a special moment for that shower of adoration and respect. Terry, coordinating with his side and opposing Sunderland, received a guard of honor from teammates and raucous applause from the stadium as he was substituted in the 26th minute (a tribute to his own shirt number). The substitution became the talking point of the game.

Many thought it was an appropriate celebration for a player who had given his all to the team. Others were more critical, uncomfortable with the artificial nature of the substitution. BBC pundit Garth Crooks said, "This isn't Hollywood, this is a Premier League fixture."

The pomp and circumstance was perhaps the lesser of the problems arising from the planned sub. In a more troubling turn of events, bookmaker Paddy Power accepted request-a-bet wagers on Terry being substituted between the times of 26:00 and 26:59, giving odds of 100-1.

According to sources, Paddy Power paid out between £2,500 and £1,000 respectively to the three winners. The FA is now launching an investigation into the illegality of the betting incident. What does John Terry have to say about the criticism? "I could not care less."

It looks like Werder Bremen defender Niklas Moisander was listening to The Calling's 2001 hit "Wherever You Will Go" in order to prepare for his match-up against Chicharito in a Bundesliga fixture against Bayer Leverkusen this past March.

The Finnish international assumed the Mexican star was looking to get in position for a sneaky run as he started to jog towards the end line and made sure to stick tight to him. However, Moisander soon realized Chicharito was being subbed and simply taking himself off the field. The two were able to have a good laugh about it, but what's certainly clear is that if you ever want an assignment followed to a T, Nik Moisander is the man for the job. 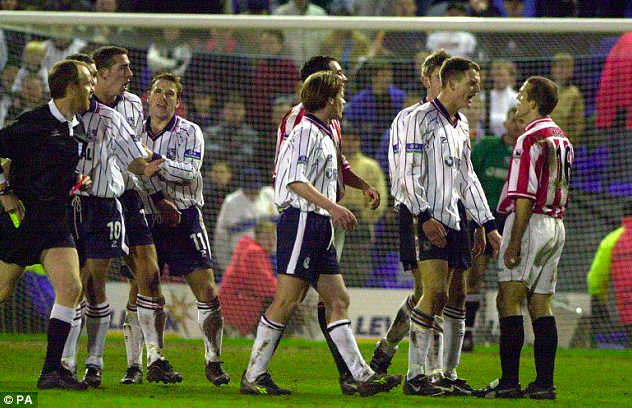 Tranmere's Clint Hill was sent off against Sunderland in a 2000 FA Cup match but a sub replaced him.

The John Terry incident last Sunday was not Sunderland's first involvement in substitution drama. In an FA Cup tie against the Tranmere Rovers in January 2000, Sunderland found themselves on the wrong side of a bizarre moment that had nothing to do with honoring an opposing player and everything to do with a discrete, dirty maneuver wielded to influence the outcome of the game.

The Rovers and the Black Cats were near the end of a close clash in the fourth round of the cup. With Tranmere up 1-0, defender Clint Hill was shown a red in injury time. The Rovers, however, decided that they didn’t really want to go a man down so in the confusion of the send off, they brought on a substitute in Stephen Hill.

At first no one noticed the suspicious swap, but it did not take long for Sunderland to realize what was going on. In a conflict-resolution technique typical of football, a brawl ensued. Tranmere escaped with the win despite the controversy, however, referee Rob Harris did not emerge unscathed. Harris was suspended and did not officiate for two months because of the error.

This player gives a whole new meaning to the word super sub. A match in Iran's second tier, the Azadegan League, between Shahrdary Yasooj and Nasaji Mazandaran set the stage for an incredibly bizarre yet undeniably inspiring substitute moment.

After a defensive mistake by a Yasooj defender, an opposing striker was left with a breakaway and seemingly easy finish...or so he thought. In stepped a Yasooj sub, warming up on the sideline, to save the day with a valiant goal line clearance.

Though the goal should have counted due to the highly illegal nature of the save, the ball never crossed the line and the ref instead awarded an indirect free kick to Mazandaran. Yasooj was able to keep the ball out of the net on the set piece, however, the sub's dramatic feat was for naught as Yasooj went on to lose 2-0.

When the Yasooj hero was asked about why he got involved, he explained "It was the only thing I could do at that time for my team." That's the kind of attitude we love to see!

7
Player gets red card WHILE being subbed

Ghana international Samuel Inkoom learned a tough lesson on professionalism in one of the weirdest substitution - and red card - moments you will probably ever see. Playing for Dnipro in the Ukranian Premier League, the dilly-dallying defender made his way off the field and took off his jersey with the exit.

As many know, the removal of your shirt during game play warrants a booking, a rule addition meant to deter excessive goal celebrations. This ref is clearly a "letter of the law" kind of official. He gave Inkoom a yellow - his second of the game - for the undressing.

You gotta feel bad for the Ghanaian but at least he did not have much of a walk of shame for the harsh send-off. Perhaps even more bizarre than the incident itself was Inkoom's explanation for prematurely removing the jersey. "It’s cold here" he said. "At the moment the temperature is about zero." Um...What?

6
Hungarian's hilarious and bizarre sub antics earn him a booking

Hertha Berlin forward Marko Pantelic also made his way into the book for some peculiar substitution antics, but on this occasion, the player seems entirely to blame. This moment is quality comedy. First, Pantelic couldn’t bring himself to understand how he, of all people, could be the one being taken off.

Then, his teammate attempted to bring the invincible man to reality nudging him to “get outta here.” The striker strolled off, clapped at his solid performance and bowed theatrically to a chorus of boos. The ref then rubbed some salt in the wound with a yellow. It seems that if we asked Marko Pantelic who is favorite player is he’d tell us its Marko Pantelic.

We go from moments that make you scratch your head to one that makes you bat your eyes. In April 1996, a substitution in a game between Iceland and Estonia occured that would be a football first (still yet to be repeated) and signal the dawn of a new era.

34-year old Icelandic striker Arnór Guðjohnsen exited the field and kissed the cheek of the whipper snapper coming on for him - his 17-year old son Eiður. The two are the only father and son to play for a national soccer team in the same match.

Eiður would go on to become arguably the most famous Icelander to ever play game, enjoying an impressive career as a forward for European giants Chelsea and Barcelona and becoming Iceland’s captain and all-time top scorer.

A 2003 friendly match between Libya and Canada, Saadi Gaddafi, son of Libya leader Mummer al-Gaddafi and a forward for the Libyan national team, witnessed a particularly touching and funny substitution moment. The small North African country had been having trouble finding opponents who were willing to play against them.

Gaddafi decided to show his appreciation for the Canadians by shaking the hand of every single Canadian player as he left the field. If that was not above and beyond enough, he proceeded to shake hands with the Canadian coaches, staff and the rest of the team on the bench. And watch what he does to a Libyan police officer near the end of the video.

There are few players in the world who would even consider a stunt like this. To perhaps no one’s surprise, Messi is one of them. Near the end of a 2014 La Liga match against Eibar, in which Barcelona held a comfortable 3-0 lead, manager Luis Enrique attempted to sub the star. Messi had other plans however.

Despite recently coming back from a grueling three-game trip to Asia with the national team, the Argentina captain made it clear he was not tired and ignored Enrique’s calls. What’s a manager to do when the world’s best player tells you he’s not coming off? Well, if you’re manager of Barcelona, you are resigned to subbing an up-and-coming world’s best who lacks the swagger of a season vet. Enrique was forced to take off Neymar instead.

Midfielder Marco Medel’s substitution - if it can even be called that - in a 2015 Chilean first division game for Santiago Wanderers makes a case for the world’s least impactful swap. Medel succumbed to injury out of nowhere immediately after stepping on the field, signaled to the bench and had to be carried off on a stretcher.

It’s unclear as to what mysterious force takes down the poor Chilean so swiftly but he was gone before the announcer could even say "On comes #21, Mar-..."

A moment that embodies all the qualities we yearn for as soccer fans —unique, funny, moving and the stuff of football folklore. You probably have not heard of Steven Davies but he is a soccer legend. In 1994, Davies, a die-hard West Ham fan, went to the Hammer’s preseason fixture against Oxford and participated in a rowdy fan’s favorite past time. He hung out with his mates, cheered, drank and voiced his dissent at all the things that displeased him.

It was not long before Davies alcohol-fueled peanut gallery commentary was pointedly directed at then West Ham manager Harry Redknapp. A daring Davies yelled to the boss that he could do a better job out on the field than the side’s striker Lee Chapman. Shocking absolutely everybody in the stadium, including Davies himself, ‘Arry pulled the fan out of the stands, got him a kit and subbed him on!

To add yet another layer to this jaw-dropping tale, in the 71st minute of the match, the courageous and chatty chap actually scored. There’s no photo or video evidence of this insanity but you have listen to Redknapp describe the incident.