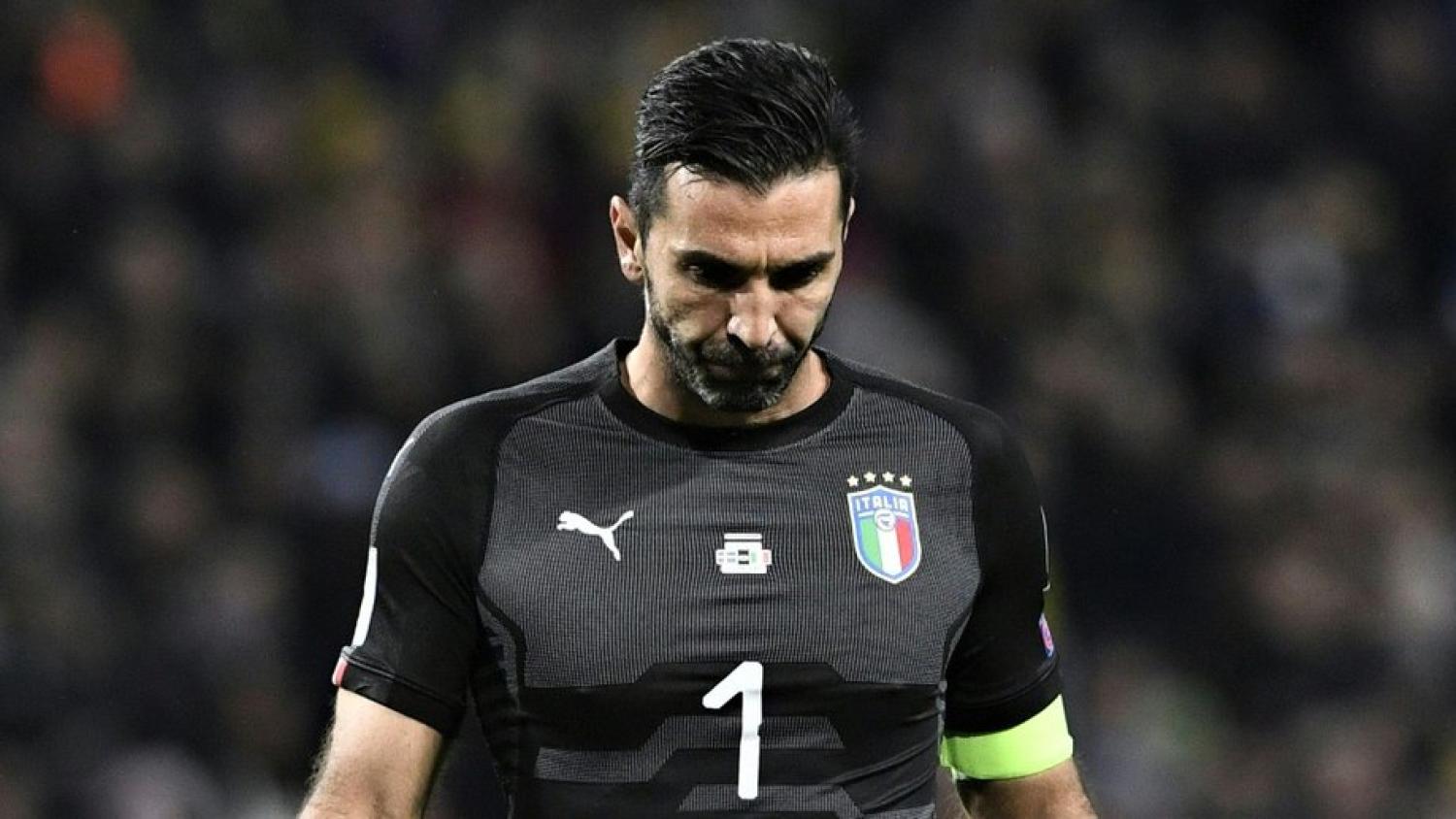 Who had it worst in failing to qualify for the 2018 World Cup?
@FIFAWorldCup | Twitter

So which country and whose fans had the more agonizing failed World Cup qualifying campaign? Here’s our ranking of who had it worse among the losers who could make up the Jack Warner Invitational. 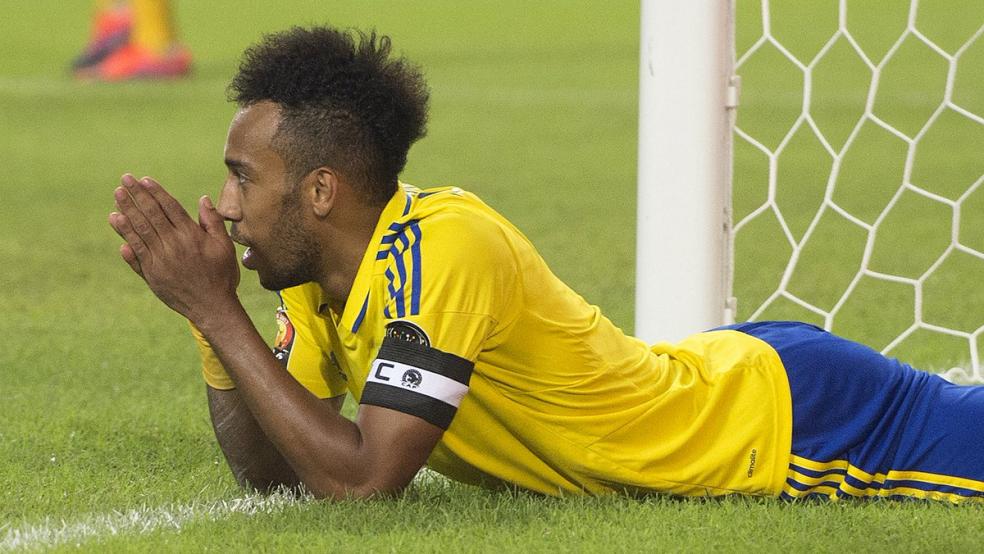 Gabon isn’t exactly a soccer heavyweight, even if Pierre-Emerick Aubameyang is one of the best strikers in the world. However, to lose your chance at the World Cup because of bad orange juice is about as bad as it gets.

Gabon was in the mix to qualify for the World Cup when a bout of food poisoning from orange juice in Morocco led to a 3-0 defeat that essentially knocked them out of the running.

While it was always going to be an uphill battle for Gabon with Morocco and Ivory Coast in its group, to be knocked out by off-the-pitch issues is never an easy pill to swallow. 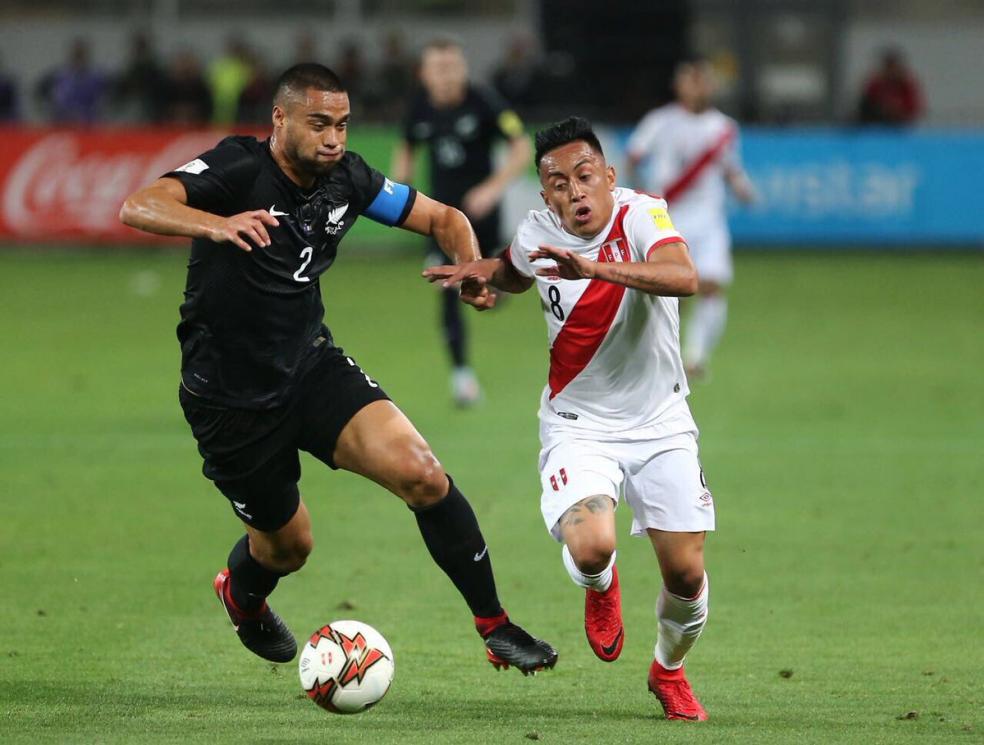 Like Gabon, New Zealand isn’t exactly a world football powerhouse, even if they do regularly qualify for the Confederations Cup for the simple fact that the rest of its federation is crap. But New Zealand gets on this list because of how long it had to wait to find out it wouldn’t be in the World Cup.

There was never any real doubt New Zealand would win Oceania’s half bid for the World Cup so it was always waiting to find out who from South America it would play in an intercontinental playoff. The Kiwis were pleasantly surprised to find out it was Peru instead of, say, Argentina or Chile.

New Zealand’s entire World Cup qualifying campaign was essentially the two-leg playoff against Peru. After earning a 0-0 draw at home, the All Whites went to Lima and were defeated 2-0.

It was New Zealand’s only loss of World Cup qualifying. 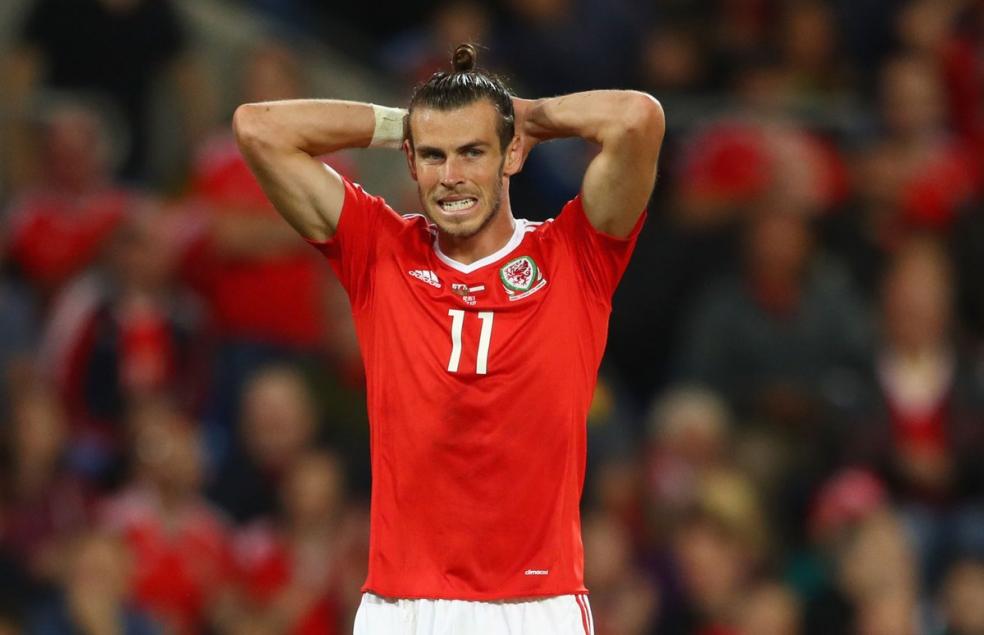 This team has one of the best players in the world (when healthy), but couldn’t reach the World Cup. Needing a draw against Ireland in the final Group D match, Wales laid an egg, losing 1-0.

Wales showed such promise with a third-place finish in the 2016 Euros, but in trying to get to the World Cup, could not overcome the lack of the oft-injured Gareth Bale.

Wales has only been to one World Cup, way back in 1958, but they were agonizingly close to ending that 60-year barren streak. Ranked No. 14 in the world, Wales is the second-best team not at the World Cup, according to FIFA rankings. 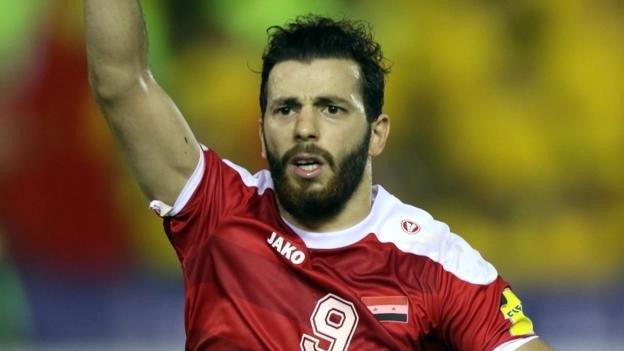 Syria hasn’t had much going for it lately, what with a bloody civil war going on. But somehow the national team nearly qualified for the World Cup for the first time in the nation’s history.

While many of the citizens fought just to live their lives, Syria faced Australia in an Asian playoff for the right to play CONCACAF’s fourth-best team. Syria earned a 1-1 draw in the first leg but an extra-time goal from Tim Cahill ended the World Cup dreams for the Qasioun Eagles. 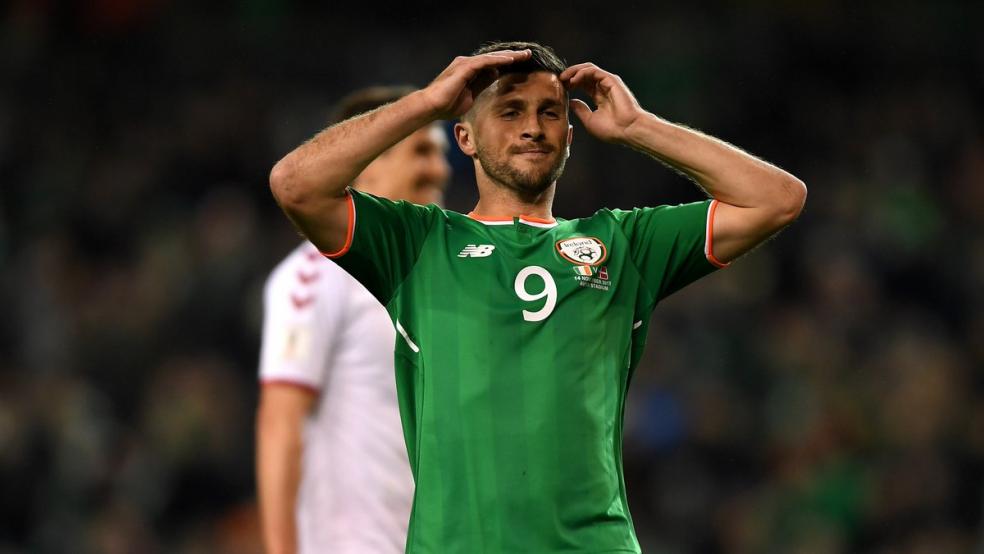 Everything was going just peachy for Ireland. The Boys in Green beat Wales in the final Group D match to finish in second place and book a spot in the UEFA playoffs, where they drew Denmark, perhaps the easiest of the seeded teams. After earning a scoreless draw in Denmark, the Irish went ahead early on a Shane Duffy goal in Ireland.

Then things unraveled quicker than a Christian Eriksen-led counterattack.

Ireland went from 85 minutes away from reaching the World Cup to a devastating 5-1 defeat over the course of the next hour and a half thanks to the heroics of Eriksen. Nicklas Bendtner added insult to injury with a late penalty kick and there was never going to be enough Guinness in the world to make Ireland feel better.

Ireland has only been to three World Cups and none since 2002, but after qualifying for the last two European Championships, you could forgive the fans for getting their hopes up. To have the joy of going up 1-0 absolutely eviscerated by Eriksen and the rest of the Danes was painful to watch even for neutrals. 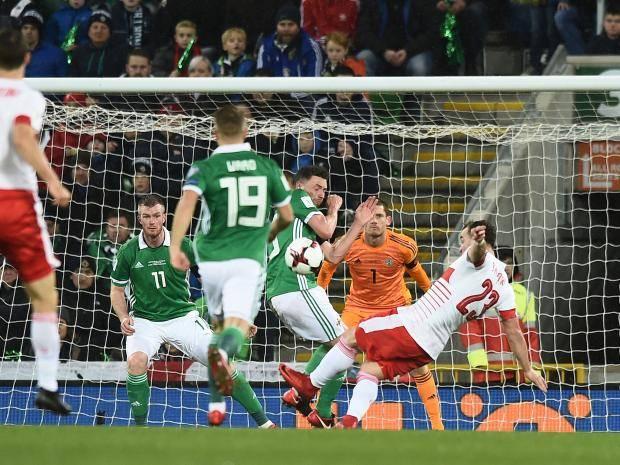 Hey, more misery in the UK! Northern Ireland has only been to three World Cups and none since 1986 and qualified for the European Championships for the first time last summer when the field expanded to 24 teams. But despite low expectations, no country (outside of maybe the U.S.) wishes World Cup qualifying had VAR more than Northern Ireland.

Northern Ireland reached the UEFA playoffs by finishing second behind juggernaut Germany and ahead of Czech Republic and Norway. They drew seeded Switzerland in a matchup of the two highest seeds in each of the pots. The only goal scored in their two-legged series was off a penalty kick on a hand ball that wasn’t actually close to being a hand ball.

Switzerland came close to scoring a dozen more goals, but they didn’t. You gotta feel bad for Northern Ireland. 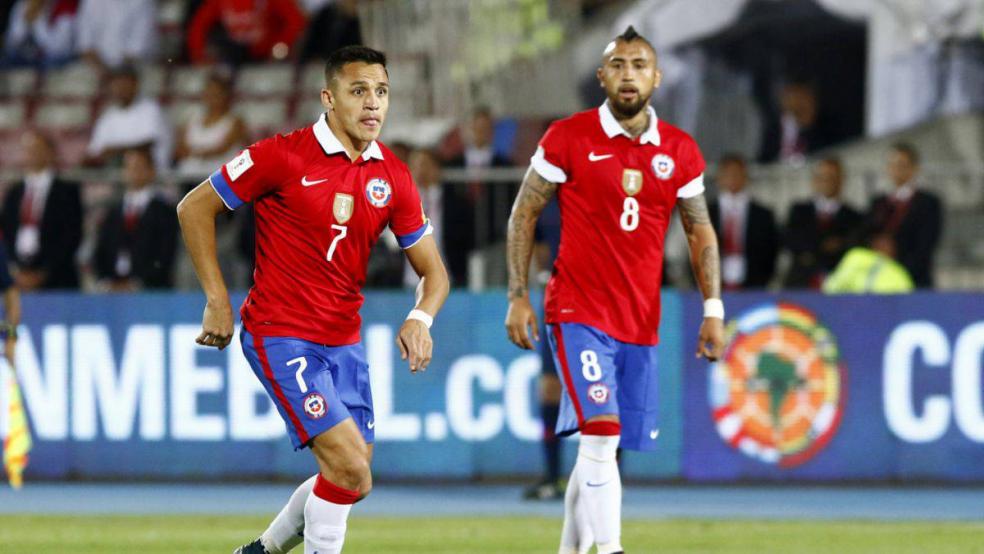 This was the golden generation. They had won the last two Copa Americas and finished second at the 2017 Confederations Cup. After two straight exits in the World Cup Round of 16, a group that included stars like Arturo Vidal, Alexis Sanchez and Claudio Bravo was sure to make the country’s first run deep into the World Cup since finishing third in 1962. Until they weren’t.

Chile finished with eight wins in CONMEBOL World Cup qualifying, more than everyone but Brazil and Uruguay. But because of eight losses (and two draws) La Roja finished in sixth place, behind Peru on goal differential for a spot in the intercontinental playoff. At No. 9, Chile is the highest-ranked team in FIFA not going to Russia.

CONMEBOL qualifying is probably the fiercest on the planet, but a team of this quality should not have lost eight times in a span of 18 matches. The golden generation will have to watch from home as their best chance at a World Cup passes them by. 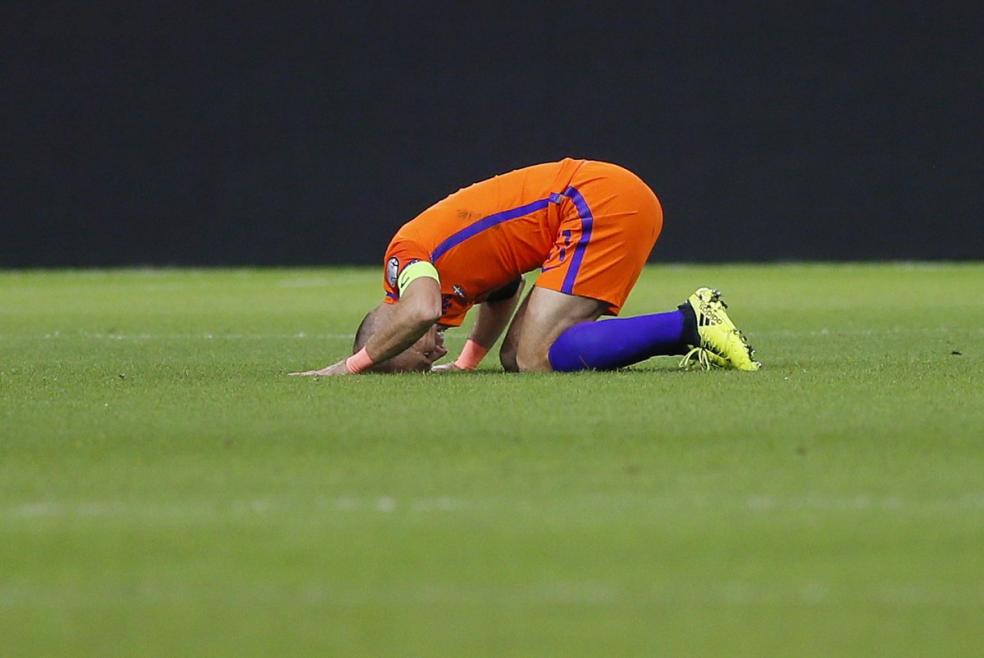 Few nations have the footballing history of the Netherlands and even fewer have shaped the modern game like the Oranje. But history doesn’t win qualifying matches.

The Netherlands was given a tough World Cup qualifying draw, grouped with France and Sweden in Group A, not to mention a tough Bulgaria squad. Perhaps most agonizingly, the Dutch finished with the same record as Sweden but finished third behind them and France on goal differential. That goal differential came in excruciating fashion thanks to a 4-0 loss to France and Sweden running up the score on Luxembourg 8-0 late in qualification.

The Netherlands would rank higher on this list if it weren’t for the fact they have missed other big competitions in the last decade or two, failing to qualify for the 2002 World Cup as well as the 2016 European Championship. The shock isn’t as great as the two countries ahead of the Dutch, but the country loves its football and their colorful fans will be missed at the World Cup. 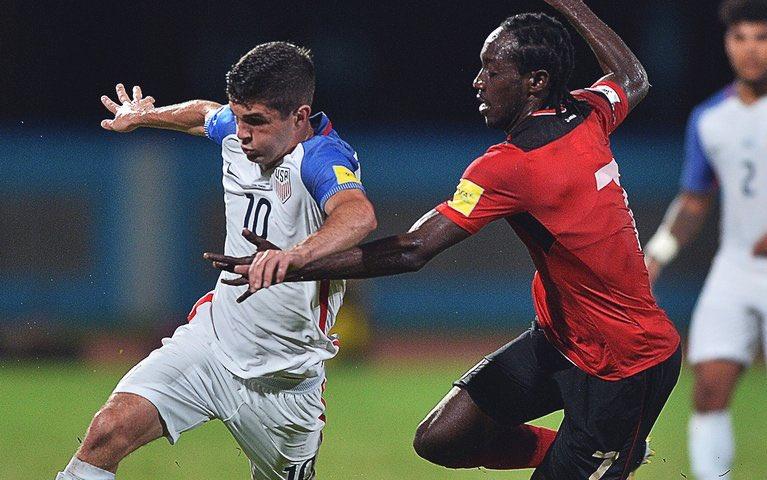 Given the teams it competes against in CONCACAF, the United States should expect to qualify for every World Cup without exception. That the U.S. couldn’t qualify ahead of countries with massively fewer resources is downright embarrassing. The USMNT failed to qualify for a World Cup for the first time since 1986 and they did so in the most agonizing fashion.

All the Americans had to do was not lose to already eliminated Trinidad and Tobago in the final World Cup qualifier. Even a loss would be OK as long as the top two teams in the group didn’t lose against Honduras in Panama. But on that fateful night in October, all three events combined to keep the U.S. out of Russia in 2018.

The shock was palpable. Most other countries on this list had at least a little warning that their team wouldn’t reach the World Cup, but most soccer fans in America were supremely confident their team would pull through and at least reach the intercontinental playoff spot. Instead, in the span of 90 minutes, Americans went from packing their bags to Russia to drowning their sorrows in vodka. Lots of vodka. And rum, whiskey, beer, wine and whatever else they could come across.

To fail to qualify for the World Cup against such relatively easy foes is a massive setback for U.S. soccer that will take years to overcome. 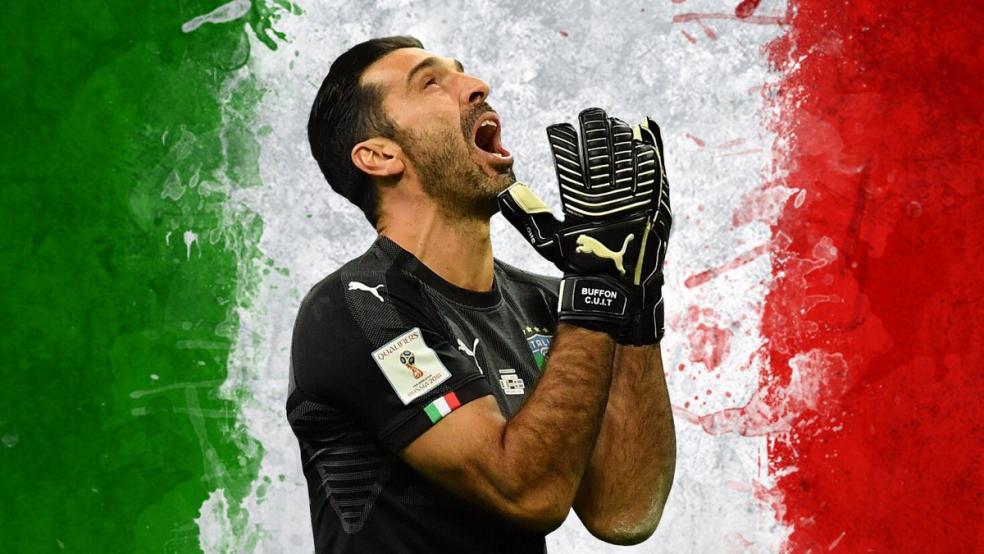 Italians probably still don’t know how to comprehend the news. Only once have the Azzurri failed to qualify for the World Cup, 60 years ago when bizarre circumstances conspired to keep Italy out of the 1958 World Cup in Sweden.

But after the unexpected 0-0 draw with Sweden in Milan in the second leg of their UEFA qualifying playoff, Italy has to deal with the reality that they won’t be in Russia. The four-time champions will be the only former World Cup winner not to be in Russia.

Italy earns the top spot in this ranking for a number of reasons. For starters, they had the difficult task of going up against Spain in the UEFA qualifying group stage, thanks to Portugal jumping into Pot 1 when it won the 2016 European Championship. A 3-0 defeat to Spain consigned Italy to second place and the UEFA playoffs where they drew Sweden, probably the toughest possible team from Pot 2.

To make matters worse for Italy, the team never really played up to the potential you expect from a nation that has won four World Cups. Despite playing teams like Albania, Israel, Macedonia and Liechtenstein, the Azzurri managed just 21 goals in 12 World Cup qualifiers, nearly half (nine) coming against Liechtenstein. Yes the defense was pretty good (nine goals allowed in 12 matches), but that aging group is now on its way out the door along with legend Gianluigi Buffon.

Frankly, Italy just wasn’t very good and that’s why they’re not in the World Cup, something that’s not easy to digest for Italians. This is the end of an era for Italy and it will take a long time for the country to get over it.