A Decade Later, Where Does Landon Donovan's Goal Against Algeria Rank On The All-Time List Of USMNT Moments? 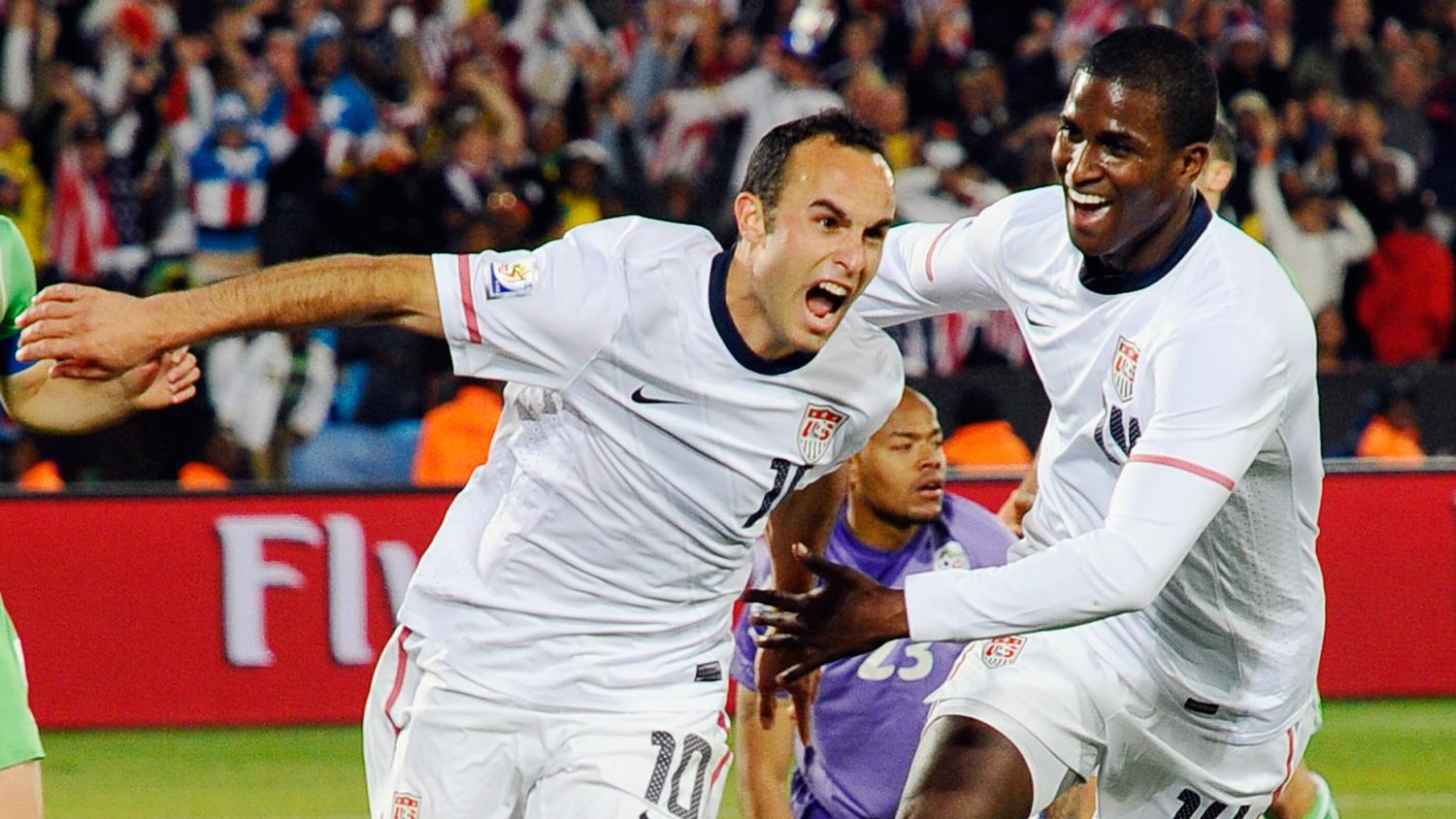 It was a game few American soccer fans could forget.
Getty Images

Exactly 10 years after one of the greatest events in American soccer history, Landon Donovans's 91st-minute winner against Algeria, it's time to finally determine where Donovan's goal ranks among the Top 10 best USMNT moments of all time.

Coming off a disappointing World Cup in 1990 where the U.S. failed to earn a point, Bora Milutinovic's team proved it belonged in 1994. The U.S. defeated Colombia 2-1 in its second game after a 1-1 draw against Switzerland in the opener. The four points it earned were enough to advance to the Round of 16 as one of the best third-place teams. Also, let's take a moment to appreciate Carlos Valderrama's hair.

Winter weather and controversy were both in abundance during this game, which soon became part of American soccer lore. With the threat of cancelation imminent, Clint Dempsey's 16th-minute goal gave the U.S. a crucial 1-0 victory in 2014 World Cup qualifying.

Spain had gone 35 matches unbeaten and boasted a midfield that included Xabi Alonso, Xavi and Cesc Fabregas, not to mention prime Fernando Torres up top. But that didn't stop a U.S. side led by Clint Dempsey and Jozy Altidore from nicking a pair of goals and shocking the reigning European champs. The U.S. almost had a dream ending to the tournament, going 2-0 up on mighty Brazil in the final before falling 3-2.

Jurgen Klinsmann's side faced a daunting task as it was drawn in a group with powerhouses Germany and Portugal as well as old rival Ghana in 2014. The United States' opening match was heading for a draw before John Brooks' powerful header from an 86th-minute corner gave the Americans a 2-1 lead and provided them a valuable three points.

Another enduring performance from the World Cup 2014, albeit in a losing effort, Tim "Secretary of Defense" Howard's record save total buoyed the Americans for 90-plus minutes as Belgium failed to penetrate the lengthy limbs of the bearded keeper in normal time, only eventually scoring twice in the extra period. WhoScored even gave him a perfect 10.0 match rating, which is basically unheard of.

Prior to this match, the U.S. had won just seven times in 43 matches against Mexico, but a World Cup qualifier on a chilly February night in Columbus, Ohio, proved to be the catalyst the USMNT needed to liven the rivalry. The United State's 2-0 over El Tri cemented the red, white and blue as a Concacaf powerhouse and created a great slogan.

A Portugal side featuring 2000 Ballon d'Or winner Luis Figo was tabbed as the favorite to top a group that also included Poland and South Korea. The United States finished in last place in the 1998 World Cup, but a standout performance from Brian McBride helped the U.S. jump out to a shocking three-goal leading before holding on to a 3-2 victory in the opening group game.

This was back in the days when any country could (and would) show up to the World Cup. England entered the cup as a favorite, but was beaten by a pesky American team in what BBC called "one of the biggest shocks in World Cup history." The only goal in the United States' victory was scored by a Haitian student named Joe Gaetjens, who was attending college in New York City and worked as dishwasher. Gaetjens was allowed to play for the U.S. because he declared his intention to become an American citizen (although he never did).

The return of Dos a Cero. The fierce rivals faced off in a bitter match in the 2002 knockout round. Mexico sought to avenge its embarrassing defeat in Colombus while the U.S. hoped to capitalize on its previous win. Brian McBride opened the scoring in the eighth minute and a young Landon Donovan doubled the Americans' lead in the second half. The match was hotly competitive, featuring 11 cards, and saw Mexican captain Rafa Marquez sent off in the 88th minute. The victory cemented the phrase "Dos a Cero" in American soccer annals.

Few moments in American soccer history can conjure such vivid memories as this one. With England leading against Slovenia, the United States had its back up against the wall. The U.S. needed a goal to defeat Algeria and advance to the round of 16. Just as hope was diminishing, Jozy Altidore and Clint Dempsey summoned a moment of magic in injury time that was finished off by Landon Donovan smashing the rebound into the net from six yards out.

Cue the pandemonion. The Ian Darke call is great, but hearing Andres Cantor makes you want to go out and hug some stranger on the street.

On this day ten years ago, Landon Donovan scored a 90th-minute winner to help the United States avoid elimination and instead finish top of their 2010 World Cup group, ahead of England, Slovenia, and Algeria from r/soccer

Editor's Note: For the best USWNT moments, read this story from last year.