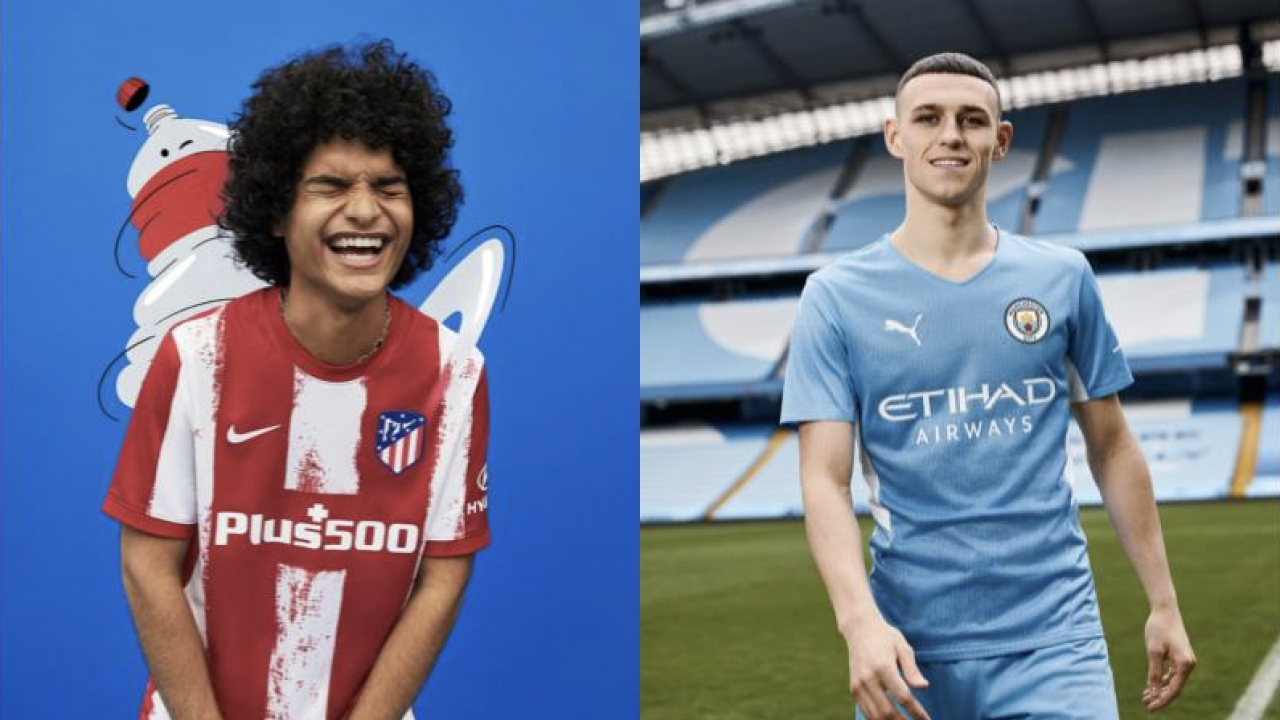 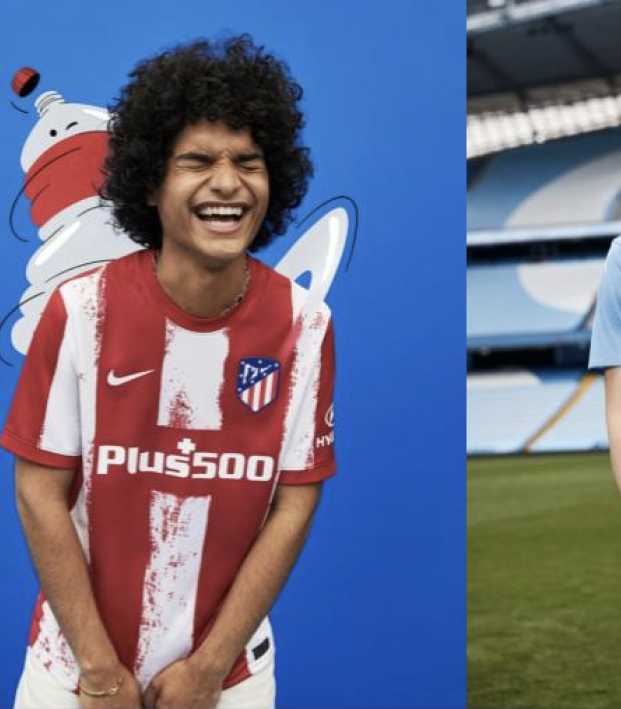 New kit season is among us with a bunch of soccer clubs updating and altering their 2021/22 home and away kits. It's one of the most exciting times as fans eagerly wait to see if their club will be dressed to the 9’s or who will be left looking silly on the pitch.

Starting with the best new kits, continuing with the worst, and ending with one's I just couldn't place. Here we take a look through the new home kits that have been recently released.

We start with Atlético Madrid who created one of the best new home kit. With this new design they attempted to reimagine their first red and white retro kit from 1947 and they hit it on the nail. With a polished modern version of their retro jerseys, they really got this new design right. The kit is very sleek but also features updated designs that really work together. The red stripes feature a splatter spray that adds to the uniqueness of the new kits, as well as combining well with the navy blue shorts that go with it. If you thought that these couldn’t get better, 100% of the kit is constructed from recycled materials.

With their new pixelated design that works to give the kit a snakeskin vibe, Inter Milan’s new home kits are first-rate. For now, it is free of any sponsorship polluting the kits with logos and it features their new crest. The kit utilizes the blue and black snakeskin patterns to form the club's classic Nerazzurri stripes and references the serpent Biscione, who is an important figure to not only the club but to the city of Milan. The gold from the Nike logo and the new badge really go well with the new pixilated colorways. The kits are also 95% constructed out of recycled materials and come in as one of the best new kits this month.

By leaving the horrible Chevrolet sponsorship eyesore in 2020, Manchester United's new home kits are one of the best. In their effort to pay tribute to their old 1960's kits they went with a more classic look featuring a three-stripe design across the front inspired by the club's three pillars of philosophy: youth, courage and success. The addition of a white collar and sleeves brings out the modern new design of the kits and goes well with the stripes on the shoulders. Made with PRIME GREEN the kit is constructed out of recycled materials and will feature the iconic red devil logo on the back and the socks for the very first time.

The traditional green of Libson will never be matched, their kits are far and away the cleanest out of any of these. With a simple classic new design that didn’t alter their kits in a major way, Sporting Lisbon’s new kits are awesome. The thick green horizontal stripes with the finer white stripes combine to make a stylish front. The traditional green is a very unique color that you don’t find on kits very often. With their new design, they did just enough altering without doing too much and taking away from their history and colors. I want to see these kits in action already, the green is just unbeaten.

Our 2021/22 Castore home kit is available to pre-order!#TheHuntForBetter

With another perfect transition to a better overall design from a clean classic kit, the new Wolves kit is one for the books. They removed their chaotic background design which really brings out the best features of the kit. The Wolves' color of gold will always stand out, but this year the kit design works well with the colors to produce a modern style. The kit features new black body panels with white seamlines and black and yellow dots that reinforce the strength of the jersey.  The Wolves successfully made the transition to a sleeker kit without altering too much of the club's essence.

If you are looking for simple and sleek, look no further as these new Frankfurt kits are everything you ever wanted. Taking a trip to the dark side, these kits feature an all-black base with red and white accents that are honestly very aesthetically pleasing. The red and white accents really pop out with how smooth the whole kit is. If you are a fan of simple classic kits, this one could be your top pick.

From the Pierre-Mauroy Stadium to the Citadel…

Making one of the biggest improvements from their last kits, LOSC Lille comes in with another great new kit. With a new street-style design, they refined their shade of red and added a repeated pentagram design that features a metallic silver undertone. The removal of the blue graphic that draped across the chest was the best addition, the kits now feature a much better pattern and are way less chaotic.

This kit from Athletico Mineiro pic.twitter.com/ZjH1E0bYLP

The ironic thing about this kit is, it wasn't made by a professional company but was designed by a fan. Yet, it is by far the best overall designed kit. This fan really did everything right, something the following design teams can't seem to figure out. It features a gorgeous background of a map of the State of Minas Gerais, Brazil, where the team is located. While the color scheme of cream white, light blue and gold work together to make this kit one of the best looking. The detail of the map on the front really makes the kit stand out from the rest, and the striped collar and sleeves bring everything together to make in my opinion the best-designed kit here.

We stand as one. We dream as one. We play as one. From Goodison Park to around the world.

Together, we are #AsOne @Everton

The new dazzle design Everton used for their new home kits is inspired by Liverpool's role in the First World War where they would paint ships with abstract designs, shapes and colors that helped disguise the vessels and confuse enemies at sea. The new yellow and white trim around the sleeves and color is one of the biggest differences as the kits weren't altered too much from the season prior. There will be a mesh design under the arms and down the sides which helps for breathability, designed by Hummel the polyester kit is made to feel like silk. Overall it seems the design team was just lazy and didn't want to make something very new and unique, these new kits definitely disappoint.

Roma's new kits fall into the worst kit category this year because of the disappointing transition from last season's kits. I was a big fan of the bright multi-color stripes that were featured in the previous Nike kits. But this year Roma and Nike have parted ways and the new kits are made by New Balance. The design and colorways are extremely subtle, making this new kit just boring. There's no intricate design or a mix of colors, the kits are just too simple this year to be anything special.

The new AS Monaco kit was developed around the famous Monaco Diagonale with it splitting the kit's colors at a 55-degree angle from the front. While one side features a new shade of red called "tango red" and the other one white, making these new home kits nothing to write home about. The design is extremely simple with just a few bright spots including the sponsors' Kappa logo which is featured a few times.

Here is another kit that lost points because of the lack of improvements or any changes. Benfica took a lighter route than last year by replacing the black accents in their previous kit with white. That switch from black accents to white accents was the biggest change in these kits, making the release kind of disappointing. I wanted to see a more intricate design change but was left with a few small alterations.

Tap below to shop now!

With another horrible transition from their previous kits, Manchester City falls into the worst home kit category. They moved away from the cracked ice design, a personal favorite, and replaced it with a blank number digital design inspired by the club's dominance throughout the last decade. The baby blue color of City's kits will always be a favorite but with their design change and lack of any other large alterations, the kits just don't impress.

Little Bit of Both

While I do like the following kits, I just didn't have enough evidence to put them in the new best kit section. So here they are, the kits that didn't quite fit into either category.

Ajax's home jerseys are one of my personal favorite kits of all time, but with the new update and lack of major additions they land here in the twilight zone. It seems as if the design team just didn't want to do much as they threw on three silver stripes on the shoulders and called it a day. The most considerable changes they made were they slimmed down the verticle red section and went back to the logo they first introduced in 1928. One change I really did like is the sponsor and Ajax badge are now in both the white and red parts of the jersey.

Traditionally I'm not a fan of West Ham's kits, it is either the colorway of caret and blue that doesn't work for me or just the lack of anything exciting about the design. But these new kits which are inspired by the kit Paolo Di Canio wore when he scored the greatest ever goal at Boleyn Ground, impressed me. The biggest alteration that I like is between the two iconic colors of West Ham you will find white accents between them that actually bring out the individual colors more. They also added a collar giving it a fresh new look. While the new design is definitely a step in the right direction, I think they didn't do enough alterations to make the kit really stand out.

Special Release: MEYBA has collaborated with F.C. Real Bristol on a limited capsule collection. The supporter t-shirts feature MEYBA's logo, with F.C.R.B. and Sophnet box logos on the back, while another features F.C.R.B. on a paisley print. Shop Now: https://t.co/0FKEbAVDAD pic.twitter.com/Z2Rh0ZlK0h

Ever heard of FC Real Bristol? Well, they aren't even a soccer club, but the Barcelona-based streetwear company still has a new kit. FC Real Bristol is collaborating with Meyba for a new capsule collection. With their new street-savvy style that pays homage to Mexico and South American designs. They feature a crisp solid blank canvas, with designs that combine streetwear and soccer designs to make the numerous floral bandana patterns. The shoulder design also catches the eye as they stretch out to the sleeves. The whole kit is overall very well designed and is definitely one of the coolest new kits, I just wish it had a home club. Maybe FC HypeBeast could be their next home.

That is all of the new 2021 kits that have been released recently. Do you agree with my groups? What new kits do you like and which club do you think improved theirs the most?