Are Virgil Van Dijk's Poor Performances At The Core Of Liverpool's Struggles? 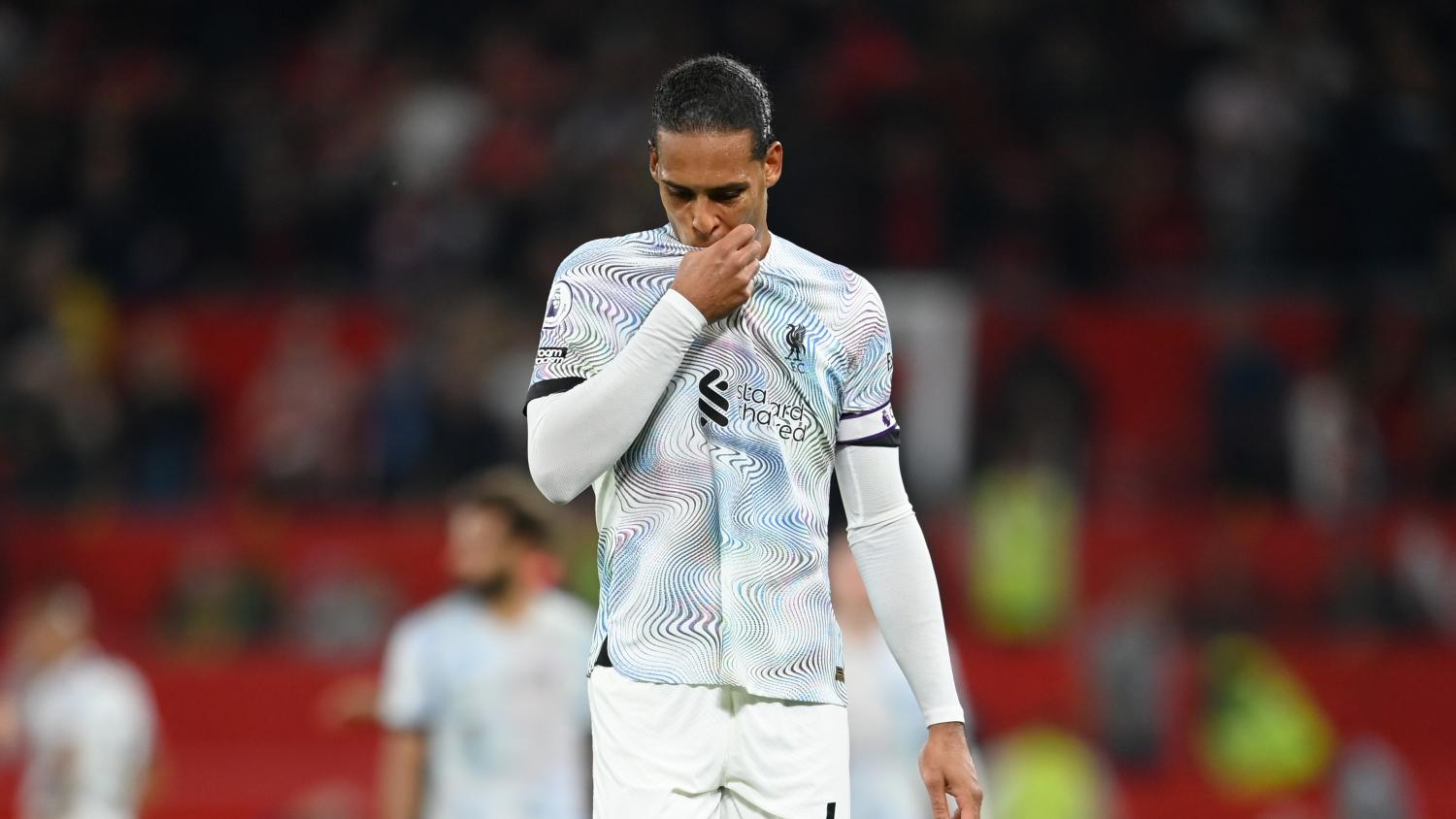 Liverpool's Dutch center back has been uncharacteristically poor to begin the Premier League campaign, but is it all his fault?
Getty Images

Liverpool is off to a miserable start — its worst in 10 years if you crave that sort of exactness — with two draws and a defeat in its first three EPL matches. It's not all bad for the Reds, as the Merseyside club should be seventh based on expected goal difference, but The most evident source of Liverpool's struggles has come from the back.

Trent Alexander-Arnold has been poor, and Andrew Robertson too — but neither has been as disappointing as star center back Virgil van Dijk. Long considered one of the best center backs in football, the Dutchman has seemed a shell of himself to being the Premier League campaign; timid, slow, unsure. He has continually been caught flatted-footed and generally caught out at the back.

Is there an explanation for van Dijk's struggles? First, let's examine the stats. Van Dijk has never been one to fill up the stat sheet in traditional defense categories — a testimony to Liverpool's strength on the pitch and the center back's style of defending.

In his five previous EPL seasons with Liverpool, the Dutchman has attempted a tackle once every 207 minutes. Last season, his 3.65 pressures per 90 min were the lowest among any eligible outfield player in Europe's Big 5 leagues. His blocks and interceptions also ranked similarly low.

This season, van Dijk is performing about the same in all four of those statistical categories, but there are two worrying stats that have shown a notable increase. Last year, van Dijk was dribbled past just four times in 34 matches. He has been dribbled past twice in August alone of 2022. The Dutch defender has also committed four fouls through three fixtures in 22/23, 4.5 times higher than his rate from the previous season.

Both numbers should be taken with a grain of salt — three matches is hardly a sufficient sample size to draw a conclusion from — but the Liverpool man has looked just as poor on film.

Against Fulham, van Dijk nearly conceded twice thanks to moments of poor defending. The first came on a Cottagers' free kick in the first half. Van Dijk allows his man Tim Ream to get in behind and is lucky when the American defender is unable to direct the header on target. 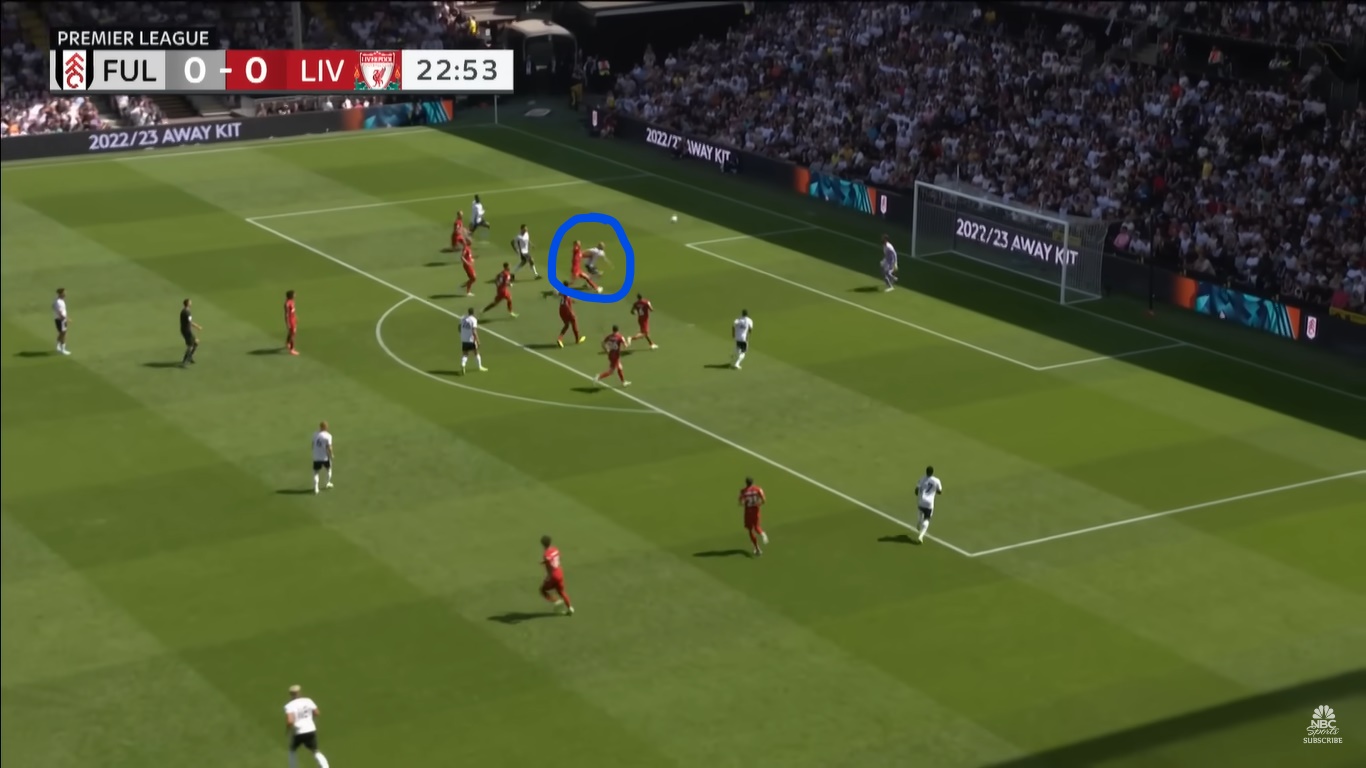 Later in the match, van Dijk is faced by Fulham winger Neeskens Kebano, who receives a pass on the edge of the penalty area. Kebano has significant space in front of him thanks to a mistimed challenge from Reds left back Andy Robertson.

But instead of closing down the Fulham attacker, van Dijk sits back, allowing Kebano ample time to size up the shot. Again, the Liverpool defender is relieved to see the shot rebounds off the inside of the far post and back into play.

Van Dijk is caught in no-man's-land — too far wide to deal with the Fulham overload in the middle, yet not close enough to the ball to pressure Kebano. 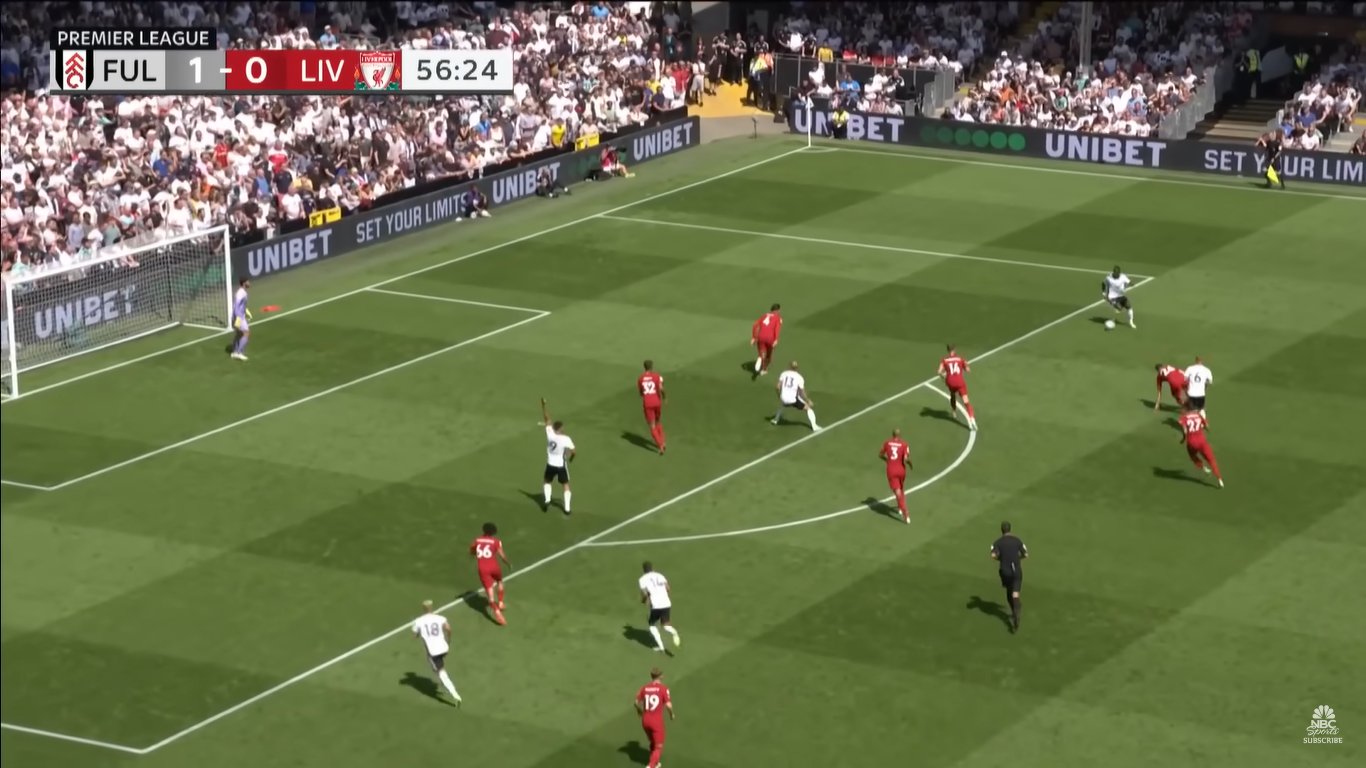 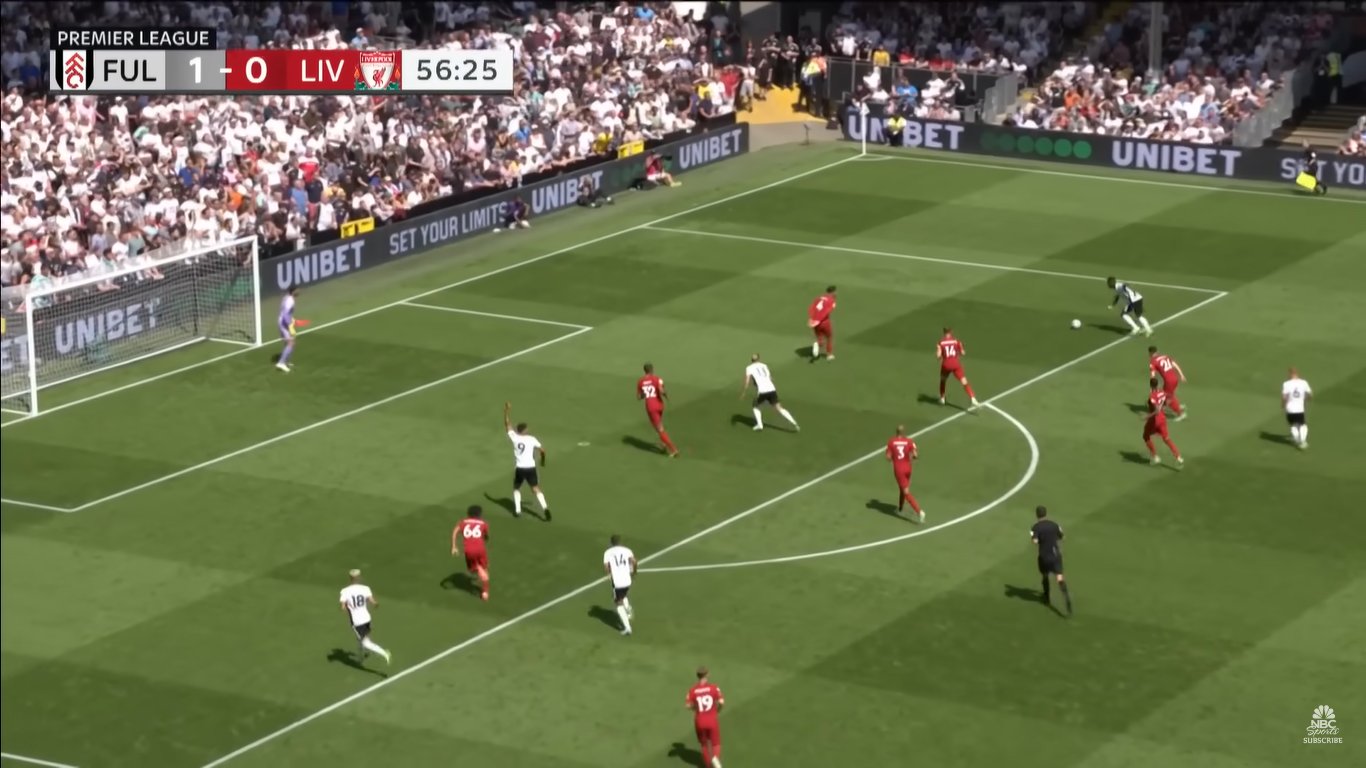 But by far the worst showing from van Dijk came in during Monday's fixture against Manchester United, when van Dijk was at fault for both of the Red Devils' goals.

He uses some fancy footwork to lose the defender and put Manchester United up 1-0. #MUFC

The play begins with Trent Alexander-Arnold being beaten far too easily on a simple one-two out wide, but the real calamity occurs in the center of the penalty area.

Van Dijk ball-watches and fails to track Jadon Sancho. He is a full six yards away from the Man United attacker when the ball is played toward the middle. It only gets worse for van Dijk. Sancho receives the ball and has the time (nearly three seconds, in fact) to turn and take four touches before firing home the shot to give his side the lead. During all of this, van Dijk is planted firmly on the edge of the six-yard area — obstructing the view of his own keeper. 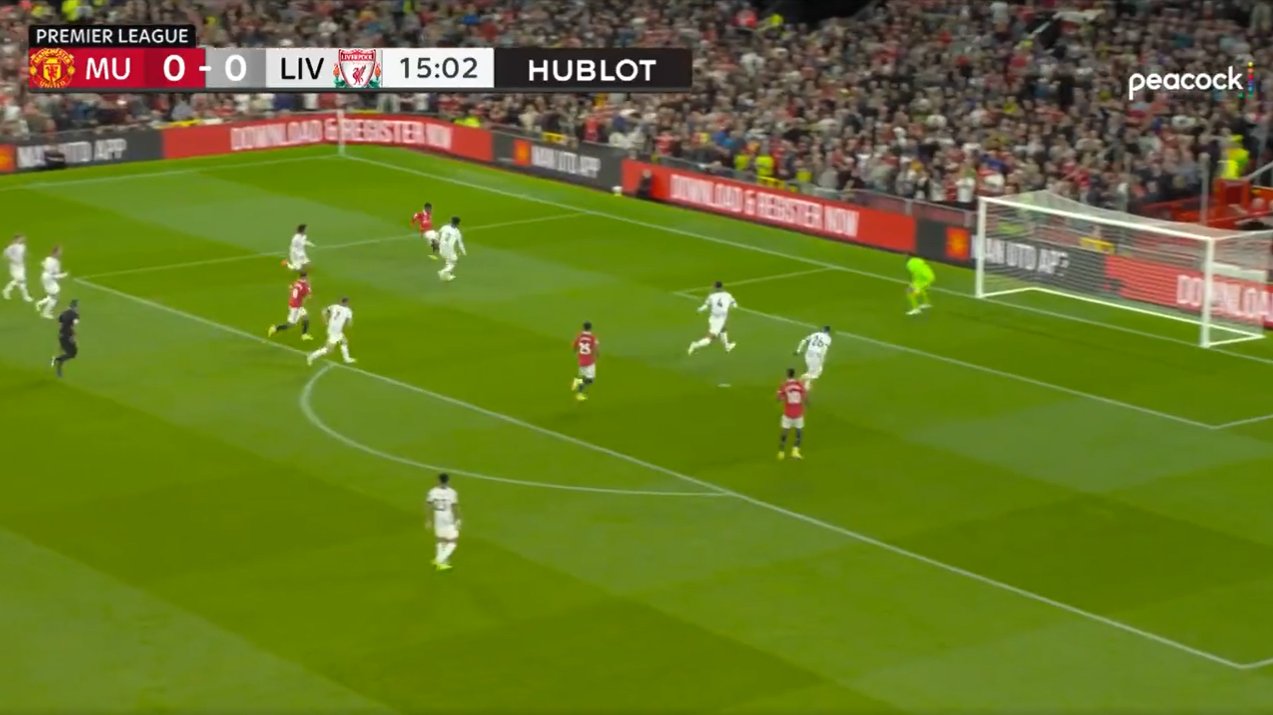 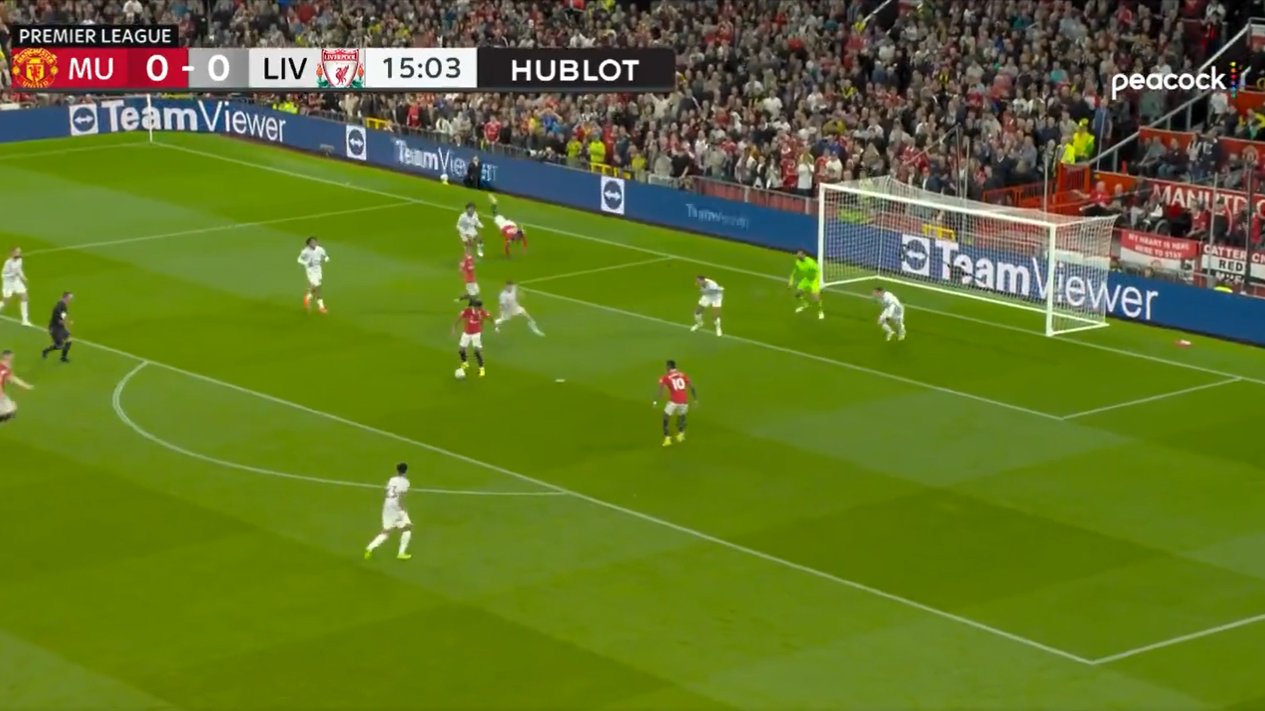 While it is van Dijk's failure to provide a challenge that causes the first goal, it is a poor step from the Dutchman which allows Manchester United to double its lead over Liverpool.

A loose ball heads toward Anthony Martial — van Dijk's man — just inside the Manchester United half. Van Dijk steps in and extends his leg for a ball he is never going to win, thus starting the Man United counterattack. Martial is able to dribble forward into the space vacated by van Dijk, which also momentarily pulls in Alexander-Arnold. Martial then finds Marcus Rashford with a smart through ball and the English international finishes past Alisson.

Marcus Rashford breaks away and scores to extend the lead.

Alexander-Arnold has also been subpar to begin the campaign, but his struggles are to be expected. The 23-year-old has never been the strongest defensively, but his weakness in that third of the pitch has been offset by his offensive contributions. Even the odd misstep from Robertson (who has actually been Liverpool's lowest-rated starter to begin the season according to WhoScored?) is not unexpected.

But the mistakes of the Liverpool fullbacks have almost always been covered up by van Dijk. The underperformance of the Reds' superstar fullbacks in 20-21 was the result of Liverpool's central defenders being systematically sidelined by injury, which prevented TAA and Robertson from being the free-flowing attackers that can be when the club is at full strength.

This year, they have continued to galavant up and down their respective wings — which includes the the occasional mistake at the back. But van Dijk has not cleaned up those messes.

Is it too much to expect one of the best defenders in the game to routinely repair the wreckage and restore order to the turmoil? And is one three-game stretch even sufficient to conclude that a player is in decline?

Yes, Virgil van Dijk has been uncharacteristically poor to begin the Premier League campaign. But his struggles have been magnified by the deficiencies of the defenders around him.

Van Dijk will need to improve if Liverpool is too reach its usual heights, but he will need the rest of the Reds backline to step up as well.