Why Do Soccer Players Walk Out With Kids?

Ivan Anich June 7, 2019
We see them before nearly every game, but why do those kids accompany players when they walk onto the pitch before every match?

We see them before seemingly every match on television. They walk out, hold hands with the players and look absolutely adorable. They are kids, but those in the know call them mascots. But what purpose do they serve? Do the players know the kids before they become mascots? Is there anything in it for the kids besides holding hands with a professional athlete? Quite simply, why do soccer players walk out with kids in the first place?

Well to begin with, those children — mascots — have not always walked down the tunnel or whatever pre-game passage way leads the players onto the pitch. You only have to look at footage from the 1990 World Cup Final or the 1994 FA Cup Final so see that kids have not always held hands with the big boys before they go to work. The earliest I could find children present during teams’ pre-game walk-outs was during the 1999 FA Cup Final when two boys walked with Manchester United and Newcastle, one for each team. It wasn’t until I found footage from the 2000 European Championships a year later that I saw a full squadron of children present, one for each player.

This emergence of child mascots during team’s processions onto the field before a match around the turn of the millennium aligns with an announcement from FIFA, but only slightly. The announcement — made in 2001 just before the final draw for the 2002 World Cup in South Korea and a year after the 2000 Euros — states that FIFA will be partnering with UNICEF in the name of a “Say Yes for Children” Campaign. The campaign was meant to “improve and protect children’s lives” around the world and show “football making a difference for children.” The most visible way the campaign was promoted was by having children “lead the players on to the field wearing FIFA/UNICEF "Say Yes" t-shirts” before every World Cup 2002 match.

Today, child mascots appear at the hip of players, holding hands, before every top men’s European league match, Champions League match, and senior level international match. These teams and events are not necessarily bound by FIFA’s partnership with UNICEF, so it seems that there are further reasons why the practice has become so wide spread, beyond simply raising awareness for a UNICEF Campaign.

So, again, why do soccer players walk out with kids?

Well, there are a lot of reasons, and depending on who you talk to they can very from, “It’s to protect the players. Fans are less likely to throw things at the players if there are children right next to them,” to, “the clubs make money off of it.” While it is probably impossible to find out if child escorts actually are glorified deterrents, it is true that clubs can make money off of mascots by charging families to have their kids be one.

Most importantly, the overarching utility of child mascots lies in public relations. It just looks good to have your team walk out with the innocence and purity of children right next to them (although, the kids aren’t always so innocent). Teams often select children from local schools or clubs, or champions of local youth tournaments and leagues. They will take a page out of the Make a Wish Foundation’s book and select a sick, handicapped, or underprivileged kid and let them meet the players do various other things in addition to the normal walk out. They might not even select kids, players’ mothers have been known to walk out with teams on Mother’s Day. Having escorts allows the teams to set an example, showcase values, and portray themselves as the role models society prefers them to be. 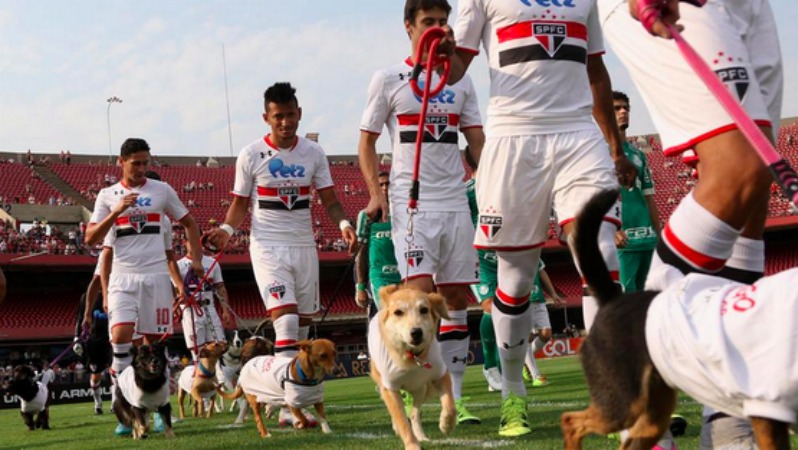 Sao Paulo walked out with dogs once to raise adress of the plight of stray dogs. Photo: @footynions

McDonald’s sent 1,408 children to the World Cup in Brazil for the purpose of being mascots and to perform various other soccer and World Cup related activities. McDonalds did that because it wanted the world to be exposed to and like its brand, and if that meant making some dreams come true along the way, then so be it.

So, why do soccer players walk out with kids? Well, because they are adorable, make the players look like role models, make the team seem like it has good values, occasionally help charities, bring in a little bit of money, and in general make everyone feel good about the game of soccer.

Not a bad return, if I do say so myself…and I do. These are all things I say myself.